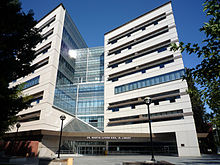 San José State University was founded in San Francisco in 1857 as the Minns Evening Normal School . On May 2, 1862, it was re-established as California State Normal School , making it the oldest state college in California . In 1871 she was settled in San José .

The SJSU sports teams are called the Spartans . The university is a member of the Mountain West Conference .