San José [ ˌsænhoʊˈzeɪ ] (Americanized to San Jose ) is a city in California and the seat of the county administration of Santa Clara County . According to the last census in 2010, the city had 952,555 inhabitants (2016 estimate: around 1,000,000, US Census Bureau). It is located at the southern end of San Francisco Bay within the informal boundaries of Silicon Valley .

The name San José corresponds to the Spanish spelling from the time the city was founded. Names with special national characters are usually not used in the USA, so the spelling San Jose is usually used there. However, the Spanish name is used on the city's official website.

According to an estimate by the US Census Bureau , the city had 1,025,350 inhabitants in 2016. Currently (2016) San José is the tenth largest city in the United States in terms of population. 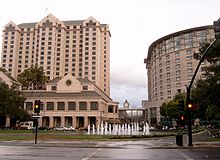 The city covers an area of ​​461.5 km², of which 452.9 km² are land and 8.6 km² are water (1.86 percent). The Guadalupe River rises in the Santa Cruz Mountains (which separate the South Bay from the Pacific coast), then flows north through San José and ends in San Francisco Bay near Alviso . This river is known as the only spawning area for salmon where they have to migrate through the inner city of a large city.

The lowest point in San José is the sea level on San Francisco Bay near Alviso, the highest is at 1,327 meters on Copernicus Peak, Mount Hamilton .

The city is divided into the following districts :

El Pueblo de San José De Guadalupe was founded on November 29, 1777 and was the first settlement in Alta California that did not emerge from a mission or military post. The city was founded as an association of farmers who produced food for the presidios of San Francisco and Monterey .

On March 27, 1850, San Jose was the first city to be incorporated into the US state of California. It was also the first capital of the state to hold the first two legislative assemblies in 1850 and 1851.

San Jose, with its almost 200 ethnic groups, is a prime example of successful integration policy ( see the sociology of migration using the example of San Jose )

San José is mainly a dormitory city for people commuting to the surrounding communities of the Silicon Valley . Because of the high incomes achieved there, the city has the highest median income per household of all major US cities of 96,662 USD in 2017. Due to specific regulations in California, the municipal finances do not benefit from this, so that the city administration has hardly been in the city since shortly after the turn of the millennium Is able to fulfill its central functions.

The metropolitan area of ​​San José, which also includes the neighboring cities of Sunnyvale and Santa Clara, generated an economic output of 252 billion US dollars in 2016. The GDP per capita was $ 119,695, making it the second richest metropolitan area in the country.

San José is the headquarters of companies such as Cypress Semiconductor Corporation and its solar offshoot, SunPower . Both companies maintain their research and development departments here as well as their headquarters. In addition, eBay , Cisco , Netgear and the software group Adobe Inc. have their headquarters in San José. IBM has a development center in Santa Teresa (Silicon Valley Lab) and a research center in Almaden Valley (Almaden Research Center).

There are some international short, medium and long haul routes from San José Airport . The American flag carriers American Airlines , Delta Airlines , Hawaiian Airlines and Southwest Airlines offer point-to-point connections to many transfer airports in metropolitan areas within the USA, including New York , Atlanta , Chicago and Los Angeles . International long-haul routes are served by ANA to Tokyo , Lufthansa to Frankfurt , British Airways to London Heathrow and Hainan Airlines to Beijing .

More international destinations, especially long-haul flights, are mostly served by the larger San Francisco International Airport , this airport is the ninth largest in the USA and the second largest on the west coast. It is connected with a direct bus shuttle.

The city's central train station is Diridon Station and is located downtown. The train connections along the west coast and in the San Francisco Bay Area are operated by Amtrak and Caltrain, respectively. The Altamont Corridor Express , which runs as a regional train through California, is also located on site. The inner-city tram VTA Light Rail runs to the train station as the central stop in the city.

Near the city center which is SAP Center , a closed multi-purpose arena, among other things, by the San Jose Sharks , the NHL - Hockey Team , is used in the city. Other events such as concerts and the annual SAP Open tennis tournament also take place here. The San José Earthquakes soccer team , which plays in Major League Soccer , plays its home games in nearby Santa Clara .

Sister cities of San José are

Sons and Daughters of the City (selection)

→ Main article : List of sons and daughters of the city of San José (California)