Adobe Inc. [ əˈdoʊbiː ] (until October 2018 Adobe Systems Inc. ) is a US software company, registered in the state of Delaware . It was founded in 1982 by John Warnock and Charles Geschke , the inventors of the PostScript page description language . The name Adobe ( Spanish and English "clay brick") is derived from a stream called Adobe Creek that runs behind Warnock's house in Los Altos , California . 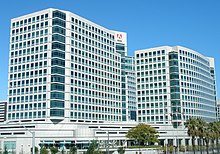 John Warnock was a researcher at Xerox PARC , where he invented the page description language Interpress . Since Xerox was unwilling to market these, Adobe was later founded and InterPress was marketed with minor changes under the name PostScript . PostScript allows documents for prepress to be described precisely and reproducibly with a relatively low volume of data . In contrast to printer languages , the files are hardware-independent , can be integrated into other documents ( EPS ), but can only be processed to a limited extent as the last stage in the production chain.

In 2009, Adobe had approximately 8,660 employees and annual sales of approximately $ 2.9 billion. In the same year, Adobe submitted a public takeover bid for Internet analytics specialist Omniture worth $ 1.8 billion.

Unknown perpetrators stole the source code of Adobe Acrobat, Adobe ColdFusion, possible other programs and credit card data from 2.9 million customers according to a notification from Adobe Systems on October 3, 2013.

Since December 3, 2005, other products include the entire range of Macromedia programs ( Flash , Shockwave , Dreamweaver , Director ). Adobe bought Macromedia on April 18, 2005 for $ 3.4 billion.

After Aldus PageMaker was taken over by Adobe, after a while Adobe PageMaker was replaced by Adobe InDesign . In order to also be able to offer programs in the private sector, Adobe has been creating slimmed-down versions of many programs for some time, which have the suffix Elements .

In November 2016, Adobe presented the Voice Conversion (VC) program Voco (spelling: “VoCo”). Voco is an editing program for sound recordings, so recordings of speeches can be edited afterwards. In mass media, Voco is also called the "Photoshop for voice files".

In June 2018 Adobe announced the complete takeover of the online shop software Magento Commerce . The purchase price was the equivalent of around 1.5 billion euros.

Adobe has been criticized because it has a quasi-monopoly in many areas, especially after the takeover of Macromedia . B. when editing images using Photoshop or illustration using Illustrator or the adopted FreeHand .

Another point of criticism is the pricing for the European market. For example, the price for the Adobe Creative Suite CS3 Design Premium in Europe was 65 percent higher than in the USA. In response to this, the Fair Pricing for European Software petition was launched in 2007 , which received over 10,000 signatures.

There is a lot of speculation in the industry about the market share of InDesign compared to QuarkXPress .

In January 2013, Adobe was heavily criticized after initially offering Creative Suite 2 for free download. According to a statement by the company, this was only a version that was intended to replace a failed product activation . Adobe did not react to the great public interest in a free - albeit outdated - version of the CS.