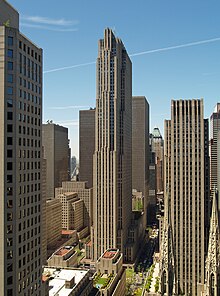 The US General Electric ( GE , General Electric Company ) is one of the largest conglomerates in the world. The headquarters have been in Boston ( Massachusetts ) since 2016 . The company was based in Schenectady , New York State , for over 80 years and then from 1974 in Fairfield (Connecticut) .

Thomas Alva Edison was referring in 1876 a laboratory in Menlo Park ( New Jersey ). Three years later, in 1879, he had his most famous invention patented: the light bulb . Edison presented his invention at the International Electricity Exhibition 1881 in Paris , where he the Germans Emil Rathenau so enthusiastic that this covers the territory of the German Reich acquired the rights to Edison's patents and in 1883 in Berlin with the German Edison Company of Applied electricity the Production of incandescent lamps began. The German Edison Society was renamed the Allgemeine Elektricitäts-Gesellschaft in 1887 , whose acronym AEG later became world-famous.

In 1890, Edison founded the Edison General Electric Company in the United States to bring his various businesses together under one roof.

In 1892 it was combined with the then biggest competitor, the Thomson-Houston Electric Company of Elihu Thomson and Edwin James Houston , to form the General Electric Company with headquarters in Schenectady ( New York ). Charles A. Coffin , who was head of Thomson-Houston until then, became head of GE . He led the new company for the first 20 years.

In 1913 GE presented the Coolidge X-ray tube, named after its inventor William David Coolidge , thereby laying the foundation for the GE Healthcare sector.

The history of the Aviation division began in 1917 when the US government developed the first aircraft engine.

The group was also active in the media business and was one of the founders of Radio Corporation of America (RCA) in 1919 , which manufactured radios and in 1926 set up the NBC station. Two years later, the first regular television programs were broadcast from what was then GE's headquarters in Schenectady, New York. The withdrawal from the media business began in 2009 when the group gave the majority of NBC to Comcast . In February 2013, the industrial group General Electric sold its remaining shares in the television station NBCUniversal to the US company Comcast.

GE Capital's footsteps go back to the 1930s when a proprietary finance company helped consumers purchase General Electric's home appliances. In the 1960s, GE Capital gave up this branch and specialized in corporate clients in the consumer, commercial and industrial goods markets.

In the mid-1980s, the company tried to break into the online services business and founded GEnie with a US-wide (and from 1990 also accessible from Germany) computer network.

Today, GE is a conglomerate operating in the energy, health, finance and transportation sectors. The group employs 300,000 people in over 100 countries worldwide, 80,000 of them in Europe. Between 2001 and 2005, GE was the most expensive company in the world by market capitalization according to the Financial Times Global 500 list . In August 2000, its market capitalization was $ 594 billion.

Jack Welch was involved in major restructuring of the company's recent history; he headed GE from 1981 to 2001 and was replaced by Jeffrey R. Immelt . In the 20 years of his tenure, the stock rose 4,000 percent. Bookkeeping problems that became known in 2019 and the allegation of balance sheet fraud, which are said to have started in the time of Welch, were put at 38 billion US dollars, which corresponds to around 40 percent of the remaining market capitalization of just less than 70 billion.

In the early days, the company manufactured several vehicles . They were intended for experimental purposes. The numbers vary between 9 and 18 copies, one of which still exists.

Between 1894 and 1898 vehicles were built at a plant in Lynn , Massachusetts. The first vehicle was an electric car , the electric motor 3 PS made. This was followed by several cars with cylinder - petrol engines and in 1897 another electric car. The designer of these vehicles was Elihu Thomson . In addition, electric cars are named after Hermann Lemp's patents .

Between 1902 and 1903, the company again manufactured vehicles at a plant in Schenectady, New York State. They were hybrid electric vehicles . They had a four-cylinder engine and an additional two electric motors, each of which drove one of the rear wheels. Both Lemp and the Grant-Ferris Company were involved in this project. There were also experiments with steam cars . In this connection Thomson is mentioned again.

The same literature source states elsewhere that the steam wagons were called Thomson between 1898 and 1903 .

In 1929/1930 General Electric took over common shares of AEG at a price of 200 percent with a nominal value of 30 million Reichsmarks , which corresponded to a share of 27.5 percent of the share capital, and sent five members to the AEG supervisory board.

In Germany, GE (as of May 2016) has around 11,000 employees at more than 50 locations. On June 28, 2004, GE opened one of then five (2015: six) research centers worldwide in Garching near Munich . It employs (as of mid-2015) around 200 researchers and employees from over 20 countries. Since the center was founded, GE has invested around 100 million euros in the infrastructure and research work there. GE Global Research Europe's main research areas include renewable energies and energy systems, drive technology, manufacturing methods for fiber composite materials , measurement and control technology, turbo machines and imaging processes for medical diagnostics. The other research centers are located in Niskayuna (New York), San Ramon (California), Bangalore (India), Shanghai (China) and Rio de Janeiro (Brazil) with around 2,600 employees.

General Electric completes around 400 mergers and acquisitions each year. Some of the last few years are listed below.

In April 2014 it was announced that GE intends to take over the energy business (with the power and grid divisions ) of the French Alstom group for around 12 billion euros. Thereupon the French politicians tried to push through a European solution for the partial sale of the Alstom divisions. A joint offer by Siemens and Mitsubishi Heavy Industries in June 2014 was unsuccessful. On November 2, 2015, GE announced the acquisition for a purchase price of 9.7 billion euros. With the conclusion of the deal, the new Grid Solutions division was created in the Energy Management business area. In the future, Alstom will concentrate on the transport sector and will take over the railway signaling division of General Electric for 700 million euros.

The GE brand was the sixth most valuable brand in the world with an estimated value of 46.9 billion US dollars (as of 2013), but fell out of the top 10 after 2016. In 2004 the logo was changed slightly, the slogan “we bring good things to life” was replaced by “imagination at work”, and our own font, GE Inspira, was developed. This font is mostly used as a lower case.

In practically all areas (e.g. power station technology and wind energy, medical technology or lighting), GE faces strong international competition, especially from the European groups ABB , Siemens , Philips and Alstom , the US company Emerson and large Japanese companies such as Hitachi and Mitsubishi .

In the jet engine sector , Pratt & Whitney and Rolls-Royce are the main competitors, with P & W cooperating in a number of areas. The CFM International joint venture was founded in 1974 with the French company Snecma (part of Safran since 2005 ) .