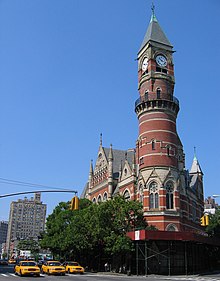 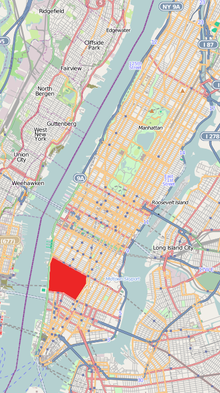 Location of Greenwich Village within Manhattan

Greenwich Village ([ ɡrɛnɪtʃ ] or [ ɡrɛnɪdʒ ]) is a district of Manhattan in New York . It is located between 14th Street to the north, Houston Street to the south, the Hudson River to the west and Broadway to the east. Greenwich Village, often simply called “The Village”, is an artist and trendy district with many cafes , bars , restaurants and experimental theaters . It is a popular residential area and, together with Chelsea, also forms a focal point as a lesbian and gay district .

The famous theaters in the district include the Lucille Lortel Theater, best known for the Threepenny Opera , and the Cherry Lane Theater, which was founded in a former brewery in 1924 and one of the first New Off-Broadway theaters Yorks was. A well-known artist's pub is the White Horse Tavern .

Well-known buildings in the Village include the Twin Peaks Building, built in 1830 and remodeled by architect Clifford Daily in 1926 , the six Grove Court houses built in 1853/54, the Italian-style houses on St. Luke's Place built in 1850 and the 1873 built the narrowest house in town at 75½ Bedford Street. The Jefferson Market Courthouse , built in 1877, was voted one of the ten most beautiful buildings in the USA in an architect survey around 1880. On Patchin Place is a house built in 1848 and home to famous writers like EE Cummings .

Well-known streets in the neighborhood include Gay Street, an artist street and the setting for Ruth McKenney's novel My Sister Eileen and the film Carlito's Way , and Christopher Street, with shops and bars for lesbian and gay audiences and a memorial to the Stonewall uprising against police raids in 1969.

Of particular interest to jazz fans is the Village Vanguard , the city's oldest jazz club still in existence. He became known through numerous live recordings (including John Coltrane and Bill Evans ) beyond the borders of the USA. The Cornelia Street Cafe , established in 1977, is a popular venue for art, literature and avant-garde jazz . The Blue Note jazz club can also be found here.

The New York University campus is located in Greenwich Village and borders the southern tip of Washington Square Park . On the waterfront of the Hudson River is the Hudson River Park with footpaths and bike paths as well as green areas, various ball sports fields, a skate park and event areas for concerts. Many of the piers are now open to the public.

The German-Jewish poet Mascha Kaléko lived on Minetta Street in Greenwich Village from 1942 to 1957. A plaque commemorates her at her previous place of residence.