The Tantris restaurant in Munich 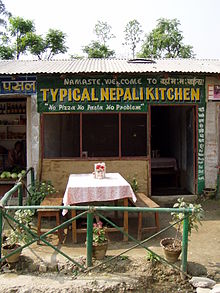 Specialty restaurant for fish and seafood in Étretat

Restaurants (French nouns from restaurer , "restore", "strengthen") are now upscale restaurants in which food and drinks are offered and consumed. They offer a variety of dishes and have separate tables or rooms for their guests. The name “restaurant” originated in France in the 18th century .

Legend has it that the restaurant was named after the host of a soup kitchen in Paris called Boulanger. In 1765, against the resistance of the guild of cooks, he is said to have obtained permission to offer other small dishes in addition to soups, including mutton feet in sauce. In 1795 he also supposedly left the biblical verse above the door of his dining room in Latin : “Come to me, all of you who are troublesome and burdened; I want to refresh you ”( Matt. 11:28 ). This motto made his inn famous, and his inn was (allegedly) addressed as a restaurant , from the Latin restaurabo - I want to refresh you. From then on he called himself “Restaurateur”. Historians describe this story as legendary , as social developments i. d. As a rule, do not come from individuals alone. In fact, there are no sources to prove the existence of a Boulanger restaurateur, nor are any court files pertaining to the alleged legal dispute. Several historians believe that this story is a made-up anecdote. Various contemporary sources before 1800 name Mathurin Roze de Chantoiseau as the first restaurateur in Paris to open his restaurant in 1766. The existence of this restaurant is documented.

The fact that Roze de Chantoiseau was actually the first Parisian restaurateur is indirectly proven by Alexandre Balthazar Laurent Grimod de la Reynière , who in 1804 speaks of a certain "Champ d'oiseau" as the founder of the restaurants, which was obviously a hearing defect.

Nor can it be proven that the name restaurant for the bouillon prepared as a tonic goes back to Boulanger alone. This was allowed to be served in general in Parisian soup kitchens even before 1765. It was very concentrated meat broth. Since high quality meat was used to make it, it was a soup only for the wealthy. The name restaurant was later transferred to the restaurant.

“Restaurateurs are the ones who make the real broths called restaurants and also offer all kinds of creams, soups with rice and pasta, eggs, macaroni, chicken, jams, compotes and other healthy and appetizing dishes ... The price of each dish is fixed, and they are served at any time of the day. Ladies are allowed to socialize there and have food prepared for them. "

Restaurants already existed in the Roman Empire. About 160 pubs and food stalls, so-called Thermopolia , were found all over the city of Pompeii , which were particularly concentrated along the arteries and in public spaces. Most of the restaurants had a counter facing the street where snacks were sold and one or more dining rooms. In the simpler ones, the guests sat on chairs, the larger ones were furnished with loungers and frescoes , similar to private dining rooms. Restaurants in Rome were taboo for wives and daughters - the erotic frescoes in some of the rooms suggest the reason. The best cooks were slaves or employees of rich families and cooked in private households. The restaurants, on the other hand, were mostly run by freedmen from various countries, and their culinary reputation was not particularly good.

Sophisticated restaurants can only be found in China around the 10th century. At the time, China was a prosperous country, and the cities were full of restaurants serving specialties and regional styles. General education at that time included knowledge of the culinary culture. One visited restaurants to dine something special or particularly good. In elegant restaurants inexpensive meals were also served for simple workers. This tradition has remained, only that in the course of time separate rooms for different needs have become common. Chinese restaurants were and are often open in the morning and are also visited for breakfast. Tourism in China has been developing since the 14th century, so excursion restaurants were built at scenic spots and restaurant ships sailed on lakes.

In Europe the tradition of the Roman Empire died out. Guesthouses were mainly visited by travelers. On the communal table there was food, the quality of which was usually very simple. We ate, not ate.

Restaurants in today's sense emerged again at the time of the French Revolution , when the traditional guild law for hospitality was repealed. Before that, the catering trade in soup kitchens , pastry bakers and other guilds was strictly separated.

The Guinness World Records leads the restaurant Röhrl since November 2010 as the oldest continuously operated restaurant in the world. 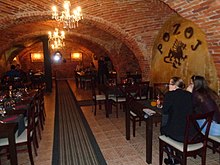 Interior of a restaurant in Čakovec , Croatia

Before the revolution there were fewer than a hundred restaurants in Paris, but as early as 1800 there were around 500 to 600. It became a custom for newly arrived MPs, who often did not live in a prestigious manner, and wealthy citizens to attend business meetings and private appointments in restaurants met.

The majority of Parisian restaurants were run by chefs and their brigades. These became self-employed after their noble employers had fled abroad. They retained the sophisticated style of cooking and made it accessible to the commoners. The restaurants turned haute cuisine into so-called grande cuisine .

The bouillon from which it was named disappeared from restaurant menus around 1820, but the furnishings were retained. The new thing about the restaurants was that, unlike in the previously common dining establishments, the guests were seated at individual tables and served individually. Its fare was by introducing the menu à la carte , as well as the meal times were not fixed. In normal restaurants at that time there was no free choice of menu, only a daily menu at a fixed price.

In other European countries and in the USA , the "restaurant" concept with free menu choice did not become common until the late 19th century. At first there were only hotel restaurants. The most famous French chef at the end of the 19th century, Georges Auguste Escoffier , became head chef at the Ritz Hotel in London. His style of cooking shaped the upscale restaurant kitchen worldwide.