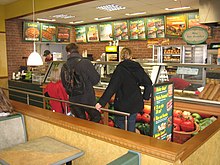 The food service is a form of gastronomy , which differs essentially by the existence of standardized and unified organization structures of the conventional catering or the individual gastronomy. System catering companies pursue the economization and standardization (with regard to a corporate identity ) of three or more restaurants . The aim of this standardization is to offer guests the same range of products with consistent quality in every business establishment. Together with companies from the communal catering and catering sector, the system catering companies are also assigned to large consumers of food. System catering was previously referred to as mass catering or catering .

Example of a work instruction in fast food system catering: "Watch list" for the standardized preparation of hamburgers etc. in a McDonald’s branch

The food service is a segment within the economic sector hospitality and combines elements of food production with the classic cuisine . Essential features are clearly defined company concepts that are geared towards central control, standardization and multiplication. When franchising it is not a group, but it is affected by numerous companies together: The franchisor provides paid a proven concept available that take over the franchisee's own risk.

Under central control is understood that all key processes and procedures are coordinated by a single entity ( "Headquarters"). Standardization means that these processes are implemented as uniformly as possible by all restaurants and businesses (branches or franchisees). Multiplication results from the fact that these standardized processes are used within a branch or franchise network. The concepts are geared towards the greatest possible utilization and coupling of synergies. The general characteristics apply to both the company's branches and partners in a franchising system.

System catering companies or groups mostly organize themselves through a central control of their branches on the basis of a strictly hierarchical structure. The control takes place from a control center. The defined hierarchy describes e.g. B. a branch manager who implements the specified standards in the branch he runs. Depending on the size of the company, the branch manager reports directly to the management or a district manager, who in turn reports to a regional manager. The unification of the individual branches or restaurants through standardization is the most important distinguishing feature with regard to classic gastronomy. On the one hand, this standardization should guarantee the guest a standardized level and is also visualized in the corporate design . On the other hand, economic effectiveness is sought, which ranges from the work processes to the tools and equipment used.

In addition to workflows and a uniform range of products with fixed quality standards, the standardization also includes the appearance and furnishings of the branches. The degree of standardization can vary between individual system catering companies. The individual processes are specified in the manuals that are issued to the branches. Among other things, it stipulates regulations for ordering processes, cash management, recipes, hygiene measures, supplier selection or marketing measures.

To assess whether a company or a concept is counted as a system catering, different criteria are assessed:

In addition, there are internal standards in personnel management and quality management, which are mostly confidential.

There are nationally as well as internationally different definitions for system catering and their subdivision. Several companies are active in several segments. There are also colloquial equations, e.g. B. with fast food restaurants or fast food or junk food .

Up until the early 1990s, a common subdivision in specialist literature was:

A common subdivision of the various market segments in system catering comes from the business magazine food-service from Deutscher Fachverlag :

The out-of-home service is understood as a separate group . This includes catering (events, community catering) as well as delivery services such as B. Pizza service .

The overall market in Germany comprises around 60 concepts. Their turnover rose in the period from 2009 to 2011 from 8.0 billion to 8.7 billion euros, the number of individual businesses remained almost constant at 11,800.

In Germany in 2011 around 2,900 companies with 150,000 employees were members of the Federal Association of System Gastronomy . Together they generated around EUR 4.9 billion. The largest companies, brands and concepts are Starbucks , McDonald’s , Burger King , Nordsee , Vapiano , Subway and Kentucky Fried Chicken , which together accounted for almost 52% of reported industry sales.

There are no official key figures for system catering. According to the annual evaluation of the business magazine food-service by the German specialist publisher, in 2011 the 100 largest companies in the catering industry (almost all of them are subject to system catering) passed the 11 billion euro barrier for the first time. Its sales growth was 5.1 percent (2010: +2.3 percent; 2009: +1.1 percent). The year 2011 was thus by far the best year after 2007. For comparison: According to the Federal Statistical Office, gastronomy in Germany gained a nominal 3.9 percent and a real 2.4 percent in 2011.