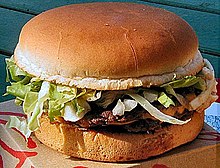 The Anglicism Fast Food [ ˈfɑstˌfud ] ( English fast food , "fast food", Schnellimbiss ) stands in the catering trade for standardized dishes with simple preparation methods, which are intended for quick consumption. The slow food movement that emerged in the 1980s is seen as a contrast to this .

If the food is eaten quickly, the time factor plays an important role in the intake of food. The classic cuisine such as Asian cuisine ( Chinese cuisine , Japanese cuisine or Thai cuisine ), German cuisine , French cuisine or Italian food place in the food culture value in the long meal service (Slow Food of haute cuisine ). Increasing industrialization and bureaucratisation have meant that workers are exposed to increasing time pressure and that their lunch break does not allow extensive dining times. It was in this environment that the idea of ​​fast food arose, which gradually expanded to include the entire diet of the population.

Fast food is seldom offered in conventional gastronomy, more often at counters - or in street sales ( street food ), fast food restaurants or sometimes via delivery service. On the one hand, the dishes are prepared quickly and, on the other hand, they are often consumed quickly, sometimes while walking or standing. In some cases, drive-ins offer the sale of products through special desks for drivers. Typical dishes are fried , boiled or curry sausages , chicken wings , hot dogs , fish and chips , hamburgers , french fries , pizzas , doner kebabs and sandwiches .

Fast-food chains guarantee consistent quality in terms of composition and taste at the same or only slightly different prices. In some cases, a more uncomplicated eating culture such as the renunciation of traditional food rites and table manners is valued, especially by younger customers. Especially in the early days, fast food was the embodiment of the American way of life in German-speaking countries.

Food preparation is usually carried out on deep fryers , microwaves or grills with a high degree of rationalization . The starting products are often ready-made food or preparations made from semi-finished products , often refrigerated or frozen goods , with ingredients such as B. wheat flour , sugar or (hydrogenated) vegetable fats are used. Critics complain that these products are mostly of low nutritional value , which if consumed too often could lead to malnutrition symptoms , especially obesity . Whole-food products or products from organic farming are rare, as are options for vegetarians and diabetics. Disposable tableware is usually used as packaging to enable it to be sold outside the home and to save washing up when consumed at home. Packaging made of foam plastic, aluminum or non-recyclable, aluminum-coated cardboard boxes are often used, especially in delivery services. 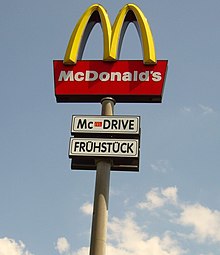 McDonald’s is the epitome of fast food

Fast food providers are large multinational corporations as well as smaller chains as well as family businesses and independent sole proprietorships . Other sectors such as bakeries (see baker's gastronomy ), butchers and fish shops also participate in the market.

Many fast-food chains and regional suppliers use ready-made products that are quickly and easily prepared on site. The preparation of fast food usually does not require high qualifications; accordingly, the wage level is correspondingly low (“ McJobs ”). In system catering , there is also a very division of labor. The selection is usually reduced to a few products and standardized in both large chains and small independent providers . The customer can often only choose on the basis of images and vary according to portion sizes. Smaller takeaways in private ownership (French fries, kebab shops) are mostly run as family businesses and often do not offer seats. In Germany in particular, this means cost savings, as in some federal states toilets also have to be provided where there are seats . A desired side effect is that guests stay shorter in standing room and the rotation of goods is increased ( fast- moving items ).

The “quick meal” market is competitive. Large chains in particular try to increase sales with marketing campaigns and, above all, to woo young people. Often, pizzerias and regional fast-food providers have relatively large numbers of direct mail for delivery services .

Precursors of the fast food restaurant were already widespread in ancient times . In larger cities there were shops where you could buy hot food; some of these shops, already remarkably similar in decor to modern fast-food stands, were excavated in Pompeii . For many city dwellers, these shops were the only way to get warm meals, as rental apartments often did not have a stove.

The first hamburger was probably served in 1895 as a “steak sandwich” in the “Louis' Lunch” of German-born Louis Lassen in New Haven . It consisted of ground beef ( English ground beef ), the two slices of bread was covered. The opening of the first McDonald’s restaurant on April 15, 1955 with cheeseburgers , French fries or milkshakes in Des Plaines is considered the commercial beginning of the fast food idea. Dick and Mack McDonald had eight multi-mixers for milkshakes made by Ray Kroc . Together with him, they founded a franchising company on March 2, 1955 , which already saw 18 newly founded restaurants in the first year. The idea for this fast food was based on the consideration that very few employees in the USA have a canteen and therefore have to have their lunch outside during the short lunch break.

The term fast food originated in the USA at that time . Fast food also came to Europe in the second half of the 20th century and is now common all over the world. Originally it was primarily the hamburgers in America that were seen as a typical fast food menu because they can be eaten while walking.

For a very long time, there have been food stalls , hawkers and sausage stands selling take-away food to passers-by at train stations and markets, in ports and along the way . Fish and chips, for example, have long been available in England (previously wrapped in newspaper) to hurried walk- in customers . Changed shopping habits have also contributed to the spread of fast food: In modern shopping centers there are almost always department stores and specialty shops as well as a few fast food providers, so that a snack can be taken on the side.

Fast food products often have a high fat content and are very salty or sweet, which enhances their taste and makes the dishes appear particularly attractive. They are high in calories , have a low proportion of fiber and are low in vitamins and minerals . Therefore, a high consumption of fast food leads to health risks such as obesity and diabetes mellitus . In takeaways, food that is fried or cooked in classic gastronomy is often fried to warm up . This type of preparation also makes the products richer in calories. Nutritional physiologists criticize the fast food eating culture for the fact that food is not consumed slowly and slowly. Enrichment with saliva, which is achieved by frequent chewing, is particularly important for digestion. Eating quickly is usually not good for your health, as you can easily eat too much and put a strain on your digestion, as the products often do not have an immediate filling effect due to the low fiber content.

Many fast food dishes are less balanced in content than traditional dishes that are eaten with vegetables. However, nutritional problems not infrequently arise from one-sided and qualitatively unbalanced diet . This can happen when people consume too much of their food in the form of fast food and only eat little fruit or vegetables.

Due to the mostly high quantitative nutritional value in connection with fast food consumption, frequent consumption of fast food can be the cause of health problems. These include B. Obesity , type 2 diabetes mellitus , metabolic problems, increased stress on the liver or kidneys or allergies from food additives such as preservatives .

A study by the University of New South Wales showed that very fatty and sugary foods quickly damage memory . Rats fed in this way suffered from memory disorders after just one week.

In the USA and Great Britain, due to the epidemic-like increase in obesity, especially among young people, there are now increasing political efforts to ban fast food dishes in state schools. In the USA, food chains such as McDonald’s or Pizza Hut have opened branches directly in schools. At a food summit in Sacramento in 2005, then California Governor Arnold Schwarzenegger signed three laws that impose strict dietary regulations on schools. From 2007 onwards, sweet lemonades and high-calorie snacks should be banned. In July 2008 the Los Angeles City Council banned the South Los Angeles borough from opening new fast food restaurants for one year.

A high proportion of fast food in total food consumption is supported by the sales strategy of most of the major suppliers: Large fast-food restaurant chains offer huge, heavily discounted portions that result in high calorie intake from a single meal. Many consumers are tempted by the low prices to order more than they actually want. This discount system is heavily criticized by many nutrition experts in various countries, especially in the USA. Due to criticism, McDonald's withdrew its supersize offering in the United States .

Environmental organizations criticize the fact that the finished products travel long distances and that so much energy is consumed that one-way packaging causes a lot of waste and the frozen goods require a high level of energy consumption. The high proportion of animal products requires large areas due to extensive grazing. The allegation made in this context that rainforests were being cut down for cattle pastures of large fast-food chains in Brazil made McDonald's in particular a target for environmentalists in the 1980s. Many large chains therefore use products from the country itself or from neighboring countries in order to keep transport routes as short as possible.

If the dish is consumed in a restaurant in Germany, the provider must pay the normal rate of 19% sales tax. However, if the dish is taken away, the tax is reduced to the 7% usual for food . The customer is therefore always asked before invoicing whether he would like to consume the food in the restaurant or take it away. Since he usually pays the same price, the net income for the supplier is higher for take-away meals.

In Switzerland, the VAT rate for service companies of 8% must be paid on meals that are consumed sitting down on site . However, food bought and taken away from a snack stand is considered a staple food for tax purposes, which is why the reduced rate of 2.5% applies to food.

In Austria food is taxed at 10% and drinks at 20% sales tax, whereby this applies equally to take away and consumption in the restaurant.

When American fast food entrepreneurs wanted to expand into Italy in the 1980s, a counter-movement arose there: Slow Food . In the meantime, this counter-movement has established itself in many other countries, including Germany.