Pizza Hut [ piːtsəˌhʌt ] ( English for "Pizza Hut") is an on pizza specialized franchise - fast-food chain , which in many places and takeaway offering. Pizza Hut is part of the Yum! Brands and is represented with around 13,000 restaurants in 130 countries. 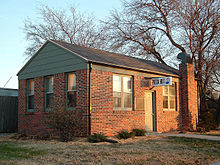 In 1958 the two students Dan and Frank Carney from Wichita (Kansas) came up with the idea of ​​opening a pizza restaurant. They borrowed the start-up capital from their mother. The brothers had to buy the devices second-hand for 600 US dollars . At a crossroads in Wichita they built their first restaurant, which they named after the rather inconspicuous building Pizza Hut ("Pizza Hut").

Business began on May 31, 1958. Ten years after opening in Wichita, the offering reached more than one million diners in 310 restaurants. The international business began with the first branch in Canada . In 1969 the red roof was introduced as a company logo, which is often confused with a hat in German-speaking countries due to the similar design and similarity of names.

The company was taken over by PepsiCo in 1977 . In October 1997 it was resold to Tricon Global Restaurants , now Yum! Brands, Inc. and owns Pizza Hut, KFC and Taco Bell . Today Pizza Hut is headquartered in Dallas , Texas . 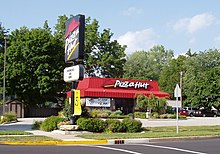 Pizza Hut restaurant in the USA

Pizza Hut operates around 13,000 restaurants in 130 countries. Sometimes there are franchise restaurants or YUM's own markets. In addition to the branches in Europe and America, there are others in Africa, Asia and Australia.

The dough blanks are produced centrally and delivered frozen to the franchisees, where they are freshly topped. Most European restaurants are supplied by a French factory.

Pizza Hut came to Frankfurt am Main in 1983 as Pepsico Food Services . After the dissolution of a joint venture with Tengelmann , Pizza Hut became part of Pepsico in 1992. In October 1997, Pizza Hut was spun off as an independent, publicly traded company. Pizza Hut has been part of the Yum! Brands , Inc.

The German headquarters are in Düsseldorf . In Germany , including the express and delivery stores, 84 branches are operated and around 2,600 employees.

In addition to dine-in restaurants, you can also find the smaller Pizza Hut Express stores in Germany , where individual pizza slices are sold and which are comparable to a stand-up snack. Store-in-store restaurants can be found in six KFC restaurants: Bensheim, Darmstadt, Eschborn, Frankfurt am Main, Offenbach and Viernheim.

Since 2014, the company has been operating branches in Frankfurt am Main, Düsseldorf, Cologne, Münster and Osnabrück that are purely for delivery operations, with little or no seating.

In May 2017, AmRest took over the German business from Pizza Hut. There are plans to expand the brand more strongly in the future and to more than double the number of currently around 80 branches in Germany, which is to be done in particular through delivery and express branches.

Pizza Hut at Rock am Ring

The food truck concept was tested in Germany for the first time in 2019.

The first Pizza Hut restaurant was opened in Switzerland in 1988. The peak was ten branches. In 2004 sales were around CHF 10 million . The sale of three restaurants in Bern and Rickenbach at the beginning of 2004 heralded the end of Pizza Hut Switzerland, which at that time was in debt restructuring moratorium. In November 2004 the bankruptcy followed. As of November 25, 2004, all six remaining branches were closed; around 100 employees were laid off.

In Austria , the first Pizza Hut restaurant was opened in Vienna in 1996 . The franchisee, ProRest Gastronomiebetriebe AG, initially had major expansion plans and wanted to open fifty branches across Austria. Five branches were actually built, all of them in Vienna. On September 3, 2003, the last branch was closed.

In addition to the “Pan”, an American-style pan pizza, there is also the “Italian Style” with a thin, crispy batter and the “Cheezy Crust” with cheese crust, each with different pizza toppings. Pizza Hut also offers a selection of salads and various pasta variations from Barilla .

Classic format: The typical Pizza Hut is a classic restaurant with service at the seat. In some branches there is also a lunch buffet with all you can eat .

Delivery: These branches, which have existed in Germany since 2014, correspond to a classic pizza delivery service with few or no seats in the restaurant and a focus on delivery service and collectors.

Express: The small Pizza Hut Express offer a reduced selection of pizzas and are located in shopping centers , airports , train stations , department stores , hotels , petrol stations , larger schools and other places. Some branches are combined with the express versions of KFC or Taco Bell or are located within KFC or Taco Bell branches. Sometimes the classic Pizza Hut restaurants also offer an express format.

WingStreet: The Pizza Hut WingStreet format expands the menu with a selection of poultry products. The idea is to offer chicken fillets or chicken wings in variations with different sauces. This format is also only offered in the USA and Canada.

Pizza Hut is undoubtedly a charity fundraiser. Unfortunately, no source is given here for the Idaho / 2012 case. The other points should also be clarified.