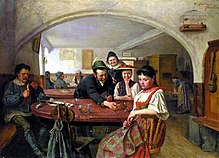 A restaurant , also " Gasthaus ", "Gasthof", "Wirtshaus", "Gastwirtschaft" or "Wirtschaft" or " Schänke " for short , is a business in the hospitality industry in which drinks or food are sold for immediate consumption and a place to stay offers. For the stay of the guests it has one or more " dining rooms " (also "inn") as well as partly also a " guest garden " (also "beer garden") or a house bar . In addition to gastronomy , accommodation ("guest rooms") is sometimes also offered; the appearance varies from region to region - in some cases, individual forms are differentiated by name depending on the availability of accommodation. Often, and especially in rural areas, other types of guest accommodation are also connected, such as rooms for festivities (“ ballroom ”), dance halls , or a sports infrastructure such as bowling alleys and children's playgrounds. The transition to an upscale hotel or restaurant is fluid and varies from region to region. For reasons of tradition, it can happen that companies with the furnishings and equipment of first-class hotels and restaurants refer to themselves as “inns” or “inns”.

In the past, more privileges (were on the restaurant prerogatives ) are such as the right to Ausspanne , battle - and back right , right to brew ( "Braugasthaus").

In addition to the long-haul inns, which are always equipped with the right to stay (e.g. stagecoach stations with relaxation, hospitality and accommodation rights), there were also establishments, e.g. B. Brauschenkgüter , which were also awarded an accommodation right only on market days for reasons of capacity.

In Germany, restaurants with accommodation are often referred to as “inns”, in the country as “inns”.

In rural regions of Northern Germany the Gasthaus Dorfkrug , called Krog, is called Erbgericht in Saxony , in Upper Lusatia and in Silesia Kretscham , in former times mainly in student circles a tavern or tavern - derived from bar or pour out.

In rural regions of southern Germany, the inn (mostly standing as a wasteland ) was also called "Klause" or "Klausen".

Since July 2005 it has been valid throughout Europe that a restaurant no longer requires a permit if no alcohol is served. This means that all requirements, such as the availability of toilets, the personal reliability of the host, etc., are no longer checked. 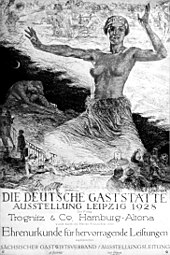 In terms of building law, a restaurant should always be treated as such if it

Accordingly, such a restaurant must comply with the restaurant ordinance.

Every restaurant must be reported to the local public order or trade office. The law distinguishes between notification and authorization. Every commercial enterprise (a term that also includes the restaurant) is at least notifiable according to § 14 GewO.

The local authorities can issue orders according to § 5 GastG and prohibit the operation after an inspection according to § 31 GastG in connection with § 35 GewO.

In order to operate a restaurant that requires a license, a license according to the Catering Act (a restaurant license ) must be available. It is issued if the legal requirements for the rooms are met and the operator has not been denied the property of reliability. The requirements, for example the availability of a toilet with a certain number of basins, result from the respective state restaurant regulations . Furthermore, the restaurant must be located in such a way that it does not cause any unreasonable nuisance for the neighborhood. This can be found in the respective regulations of the development plan valid in the area. For example, a restaurant is not permitted in a purely residential area (WR), but is permitted in a general residential area (WA).

The license can with ancillary provisions , in particular restrictions, may be connected, for example, that is to provide noise protection measures. The license is valid for a specific type of operation ( e.g. discotheque , pub, catering), for specific rooms and for a specific person ( innkeeper ).

Before and during the possession of a permit, the operator must comply with all legal obligations. This applies in particular to the regulations on the use and processing of food, the regulations of labor law, the protection of minors, the Gambling Act (if there are machines with cash stakes) and data protection law as well as the Telemedia Act, if a website is offered.

Before, during and after operations, the public order office and the police can carry out on-site checks. Failure to comply with legal provisions can constitute an administrative offense or a criminal offense and, if found multiple times, result in the operator being deprived of his or her reliability.

In Austria, a distinction is made between the hospitality businesses “inn” and “inn” as a type of operation in accordance with Section 111 (5) of the trade regulations .

This distinction between mixed accommodation / gastronomy and primarily gastronomy also extends to some special forms:

In practice, however, there is hardly any distinction between whether a restaurant also offers rooms or what level it is - this cannot be derived from the name of the house, for example. Also houses with less than 10 beds, as long as the catering stays in the house and in a more familiar circle, as ancillary small businesses, do not fall under the specialty of "accommodation" in the special sense.

The collegiate cellar of the St. Peter monastery in Salzburg (first mentioned in a document in 803) claims the title for Central Europe . The Guinness Book of Records lists the Röhrl restaurant in Eilsbrunn near Regensburg , which has existed since 1658, as the “oldest continuously open restaurant in the world”. The traditional restaurants Zum Riesen in Miltenberg , Zum Roten Bären in Freiburg im Breisgau and the Herberge zum Löwen am Schönberg also see themselves as “Germany's oldest inn” .

In Tuscany , during the Great Plague , some inns had wine windows ( buchette del vino ) through which paying guests could be served alcoholic beverages without a great risk of infection.