The title of this article is ambiguous. Further meanings are listed under Meal (disambiguation) . 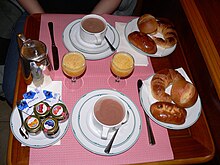 Meal (solemn and ancient: meal , earlier also Atzung , Atz ) is now generally called the consumption of food - food and drink - at certain times of the day, often together with others. The main meals in Europe and North America are breakfast , lunch and dinner . In addition, snacks are often taken in between meals that have more of the character of a snack . In other cultural areas, only two meals a day are sometimes common.

In the German dictionary of the Brothers Grimm , the term meal is derived from the time given for a guest meal to which an invitation was made. The meaning was then shortened to the consumption of food and drinks, actually the meal .

In western cultures, a main meal today often consists of vegetables or salad , a side dish such as potatoes and a protein-rich food such as meat , egg or fish . However, there are numerous deviations from this scheme.

In Romanic countries, the warm main meal usually consists of one or more starters , a main course and a dessert or cheese as a conclusion.

There is no standardized meal plan in Europe. During the Middle Ages , the habit of eating three instead of two meals a day gradually spread in Germany . The first breakfast in the morning for the common people took place between 4 and 6 a.m. and consisted of soup and bread . Lunch was eaten at 10 or 11 a.m. and dinner was at 6 or 7 p.m. At that time the nobility limited themselves to two meals; he had breakfast after early mass and had the main meal in the afternoon at 3 or 4 p.m., which could be very rich. At the beginning of the 18th century, three meals caught on in the upper classes and lunch was served at 1 p.m., while the common people ate at 12 p.m.

In England, on the other hand , the nobility introduced four to five meals in modern times : breakfast between 7 and 9 a.m., a second breakfast (lunch) at 12 or 1 p.m., then at 4 or 5 p.m. then tea and bread and butter (afternoon tea) and one warm meal (dinner) in the evening between 6 p.m. and 8 p.m. You can have a snack with tea later.

In the early 1990s, most Germans ate three meals a day, usually between 6 and 8 in the morning, between 12 and 2 in the afternoon and between 6 and 8 in the evening. At the weekend, breakfast and dinner are often postponed, while the time for lunch remains the same. An average of 80 minutes a day was spent eating. There is a tendency among working people to eat the main warm meal in the evening. Even if you are on holiday on foot or in a vehicle, the main warm meal is often postponed to the evening. In Sweden, moving the main meal to the evening has meant that dinner is now referred to as middag .

In the 1980s, only 8% of the families surveyed said they ate all meals together, 20% had no meals at all. "The more finished products are used, the less a meal is perceived as a family meal: the preparation process is seen as a 'token of love'."

In the mid-1990s, 82% of hot main meals were consumed at home; in 2001 it was only 66%. It is increasingly eaten in canteens and fast-food restaurants, but also in bakeries and butchers with food options. Young people between the ages of 19 and 25 in particular often eat outside the home.

Sociologically, meals are assigned an important social function that goes far beyond mere physical satiety. “(...) they are the primary socialization site for conveying social ideas about food and drink and how to deal with food in society. (…) Within the family, the table community is a central symbol of togetherness (…) ”. A lavishly prepared meal is often implicitly understood as a form of affection and thus has further symbolic meaning. The meal is also a framework for part of the child rearing process, especially the teaching of good behavior .

"The traditional model (in Germany, add.) Was the warm (lunch) meal at home, cooked and served for the family by the housewife ." This tradition is gradually dissolving in Germany (and other countries) On, sociologists speak of increasing "situational eating in everyday life" at unspecified times and no longer exclusively at the dining table. "For children and young people, eating together is sometimes an annoying obligation and is perceived as a place of constriction or coercion (...)."

Anthropological research has shown that there are specific rules for meals in every society. Above all, Mary Douglas has dealt with this topic and in 1975 the essay Deciphering a Meal ( deciphering a meal ) published. The work of the ethnologist Claude Lévi-Strauss on this topic is also significant . In contrast to drinks, which are often offered to strangers, meals are restricted to a certain group of people and an explicit invitation must be issued to outsiders before participation. For all known ethnic groups, the preparation of everyday meals is traditionally a task for women.

To date, there are no fixed regulations on meals in labor law. It is recommended to take meals during work breaks. In order to comply with youth protection regulations, sufficient time must be allowed on ships ( Section 53 (5 ) SeeArbG ). Young people are also allowed to stay alone in restaurants between 5 a.m. and 11 p.m. when they are eating a meal ( Section 4 (1) JuSchG ). Similarly, collective agreements often stipulate that the employer must allow sufficient time to eat meals.

"Meal" as a greeting

"Meal" is often used as a brief greeting, especially in western areas of Germany and in Austria at lunchtime. The origin of this custom is a short form of the greeting "Blessed Meal!" The abbreviation was already common in the 19th century, as can be read in the dictionary of the Brothers Grimm, although the meaning of the blessing has largely been lost today. The term “meal” is difficult to translate into other languages. In colloquial language, you use this expression when you meet (mostly in the professional area) around noon. It is often used when leaving to and from lunch break. A comparison with “Bon appetit” is therefore too simple and does not express exactly what you mean when you greet each other briefly with “meal”.

In northern Germany, the greeting “meal” is increasingly used throughout the day as a general welcome such as “hello” among friends. In the business sector, this type of address is rather frowned upon due to the implication of the personal level.

The “meal” greeting is also used in the mornings outside of northern Germany.

The ironic use of the formula “blessed mealtime” or “cheers meal” in the sense of “nothing there” or “on the contrary”, used by Friedrich Schiller in Wallenstein's camp , among others, is also proven by Grimm .

In Switzerland this greeting is not used. However, it is common at lunchtime that, similar to the German meal, to say goodbye when leaving work, simply use Swiss German En Guete! ( Enjoy your meal ) says.