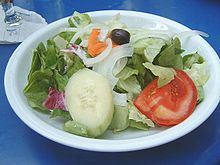 A salad as an example of a cold starter

A starter ( French: entrée ) is a small dish that is eaten before the main course and is intended to stimulate the appetite and curb the greatest hunger . The term starter comes from the classic sequence of dishes. A rough distinction is made between warm and cold starters. In the classic menu , the first course comes from the cold kitchen , the warm starter, originally the pre-meal , forms the link between soup and fish or main course.

As a starter, light, appetizing dishes are usually served, which can be prepared relatively quickly in order to be served as quickly as possible. Frequent starters are a small salad or toast with a meat or fish topping, but also terrines and pies . A soup is a separate course in both the classic and modern menu, but is still often referred to as a starter in the broader sense.

The importance of starters differs in international cuisines. In French cuisine there is a mostly cold hors d'oeuvre , in Italian there are often several antipasti . The simultaneous serving of a large number of starters in Spain ( tapas ) and in Turkey ( mezze ) is enough to satisfy you without a subsequent main course.

An amuse-gueule (also called an amuse-bouche or greeting from the kitchen ) can also be served before the starter to stimulate the appetite .