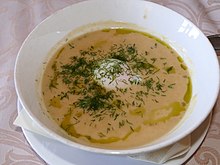 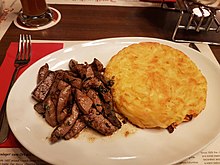 The word court was formed in the 13th century from to judge in the sense of “to serve”, “to prepare”. This describes the process of preparation . Many traditional dishes cooked according to a recipe usually have a designation of origin (e.g. Irish Stew , Königsberger Klopse , Leipziger Allerlei , Salzburger Nockerln , Thuringian Rostbratwurst , Wiener Schnitzel , Zürcher Geschnetzeltes ) or a fixed name (e.g. Caesar Salad , Gulasch , Himmel und Erde , Involtini alla siciliana , ragout fin , roulade , onion soup ).

Derived terms are e.g. B. the "main course" as a central component of a multi-course menu between starters and desserts , the national dish as a typical "favorite dish" of a country, which is often used as a nickname for its inhabitants (e.g. "Krauts" from sauerkraut by the British for German or “Spaghettis” from Germans for Italians), or the “ plate dish ” as a dish that is served in portions on a plate . The “main dish” or “main meal” refers to a constantly offered dish in a restaurant , i.e. the specialty of the house, in contrast to the changing “daily special”. “My main dish” is often used for the personal “favorite dish” (favorite dish). Elaborately decorated show dishes served primarily representative purposes. They were popular in ancient Rome , the Renaissance, and the Baroque ; B. as a large roast of whole animals, in which several, smaller and smaller, stuck or songbirds fluttered from their belly while carving .

There are usually three meals a day. These are breakfast , lunch and dinner , also called dinner depending on the region.