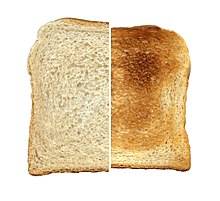 Slice of toast before and after roasting

The toast or toast (from English toast , toast ; this from the Latin participle perfect passive tostus , dörrt , from tostare , dörren) or the toasted bread is a fine-pored box of white bread with a thin crust , which is often toasted in slices before consumption , today usually with a toaster . Not only the white box bread that has become classic, but almost every bread, formerly known as Bähschnitte , can be toasted, but develops a differently distinctive toasted aroma depending on the type.

Toast bread consists essentially of wheat flour , water, milk or milk powder , fat , sugar , table salt and leavening agents such as yeast or wheat sourdough . The dough is made either with pre-dough or with wheat sourdough. Instead of fat, milk and sugar, toast bread improvers (approx. 10%, based on the amount of flour) can be added. Due to its comparatively high protein content ( wheat gluten and milk protein ), the dough has a good gas holding capacity, which gives the slowly cooked bread its fine pores. The high protein content, sugar and fat are responsible for the typical roasted aroma that arises when toasting, see Maillard reaction . If the bread is called butter toast , only butter may be used as fat.

In particular, the following are produced and designated:

Toast bread is usually sold pre-cut, whereby the size of the slices is roughly the same for all manufacturers, so that toasters with similarly large toasting slots can be produced and used. In recent years, however, formats that are slightly larger have also come onto the market.

In Great Britain, the term toast is used as a name for toasted bread as early as the Middle Ages . The bread was roasted with sticks over an open fire and then eaten as an accompaniment to a meal or dipped in soup. However, there were special toast spreads as early as the Middle Ages, for example Pokerounce made from honey , ginger and cinnamon . Toste rialle consisted of a paste made from sugar and rice flour, sweet wine, raisins, nuts and spices. Toast made with a paste made from cinnamon, sugar, and wine was particularly popular in the 17th century. Since the 16th century, roasted bread has also been topped with meat, which, according to the taste of that time, was seasoned with sugar, cinnamon and ginger. Also hash has been used as a support. At the end of the 17th century it became customary to butter toast bread and eat it warm for breakfast and later for afternoon tea .

In the 19th century, open toast became a starter in England , also popular as an appetizer , which was well suited for leftovers in upscale kitchens. Roasted bread was used in a rather unusual way in the 18th century as the basis for making substitute coffee . For this, charred toast bread was soaked in hot water. However, the taste had nothing to do with coffee , according to Alan Davidson .

There is no separate name for bread that is suitable for toasting (like the toast bread common in German ) in English. The term toast describes in English only the already toasted bread; before roasting, it is simply called bread .

In German-speaking countries, the Bähschnitte (from bähen : lightly roast) was already known in the Middle Ages. The typical light toast bread has only been around in Germany since the 1950s. Toasters , known as “bread toasters” , had been around since around 1910, but they were used for the usual brown bread . "With the help of a marketing organization of American wheat producers and German toast equipment manufacturers toast was as sophisticated and practical 'bread meal after World War II, made in Germany with a high advertising expenses popular." In 1963, from bakeries a working group to promote the toast consumption established that the brand Golden Toast brought to market. Darker wholemeal toast has also been available in Germany since the 1980s. The invention of toast Hawaii by the television chef Clemens Wilmenrod in the mid-1950s contributed significantly to the popularity of toast as a snack .