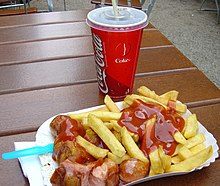 Currywurst with French fries , a typical snack in Germany

A snack is a snack between meals . The term snack , which comes from English, has the same meaning.

The term is a verbal abstract of a verb inbīzan (meaning unclear; literally: “to bite”) which has been documented in Old High German as imbiz or inbiz since the 9th century . In Middle High German there is an elongation of the stem vowel (imbīz, inbīz) and in Middle Low German there is the variant immet . In Alemannic , the variant zimmes (from ze imbiz ) still exists today . In the Rhine-Franconian dialect , the shorter form Ims is still used today, for example in the word Leichenims . The Dutch word for breakfast, ontbijt (literally: “Entbiss”), follows the same educational scheme. An unused Longobard word with the assumed meaning “Bissen, Happen; Flatbread ”, which corresponds to the Old High German bizzo or pizzo “ Bissen, Happen ”, is accepted by some etymologists as the starting point for Italian pizza .

The term went into common usage. In some parts of the German-speaking area, for example, the second breakfast is called a "snack".

Regional types of snacks have been included in the upscale gastronomy, including French canapés , Austrian snacks , Turkish-Greek mezedes and Spanish tapas .

In German usage, a “snack bar” is often also a sales stand, a small shop, e.g. B. a snack stand , or a food truck , on which quickly prepared meals are sold that can be consumed standing or walking as street food .

Even in the late Middle Ages , such simple, ready-made meals were offered in markets . Today's food stalls developed from these market stalls.

Another, usually larger, form of snack bar is the fast-food restaurant , which in particular offers fast food .