This article describes the takeaway dish. For the song of the same name by Herbert Grönemeyer see Currywurst (song) , for the fast food in Herne see The Currywurst .

Currywurst in a cardboard bowl

The currywurst [ ˈkʰœ.ʀiˌvʊʁst ] ( listen ? / I ) is a dish made from fried or other boiled sausage that is served whole or cut with a tomato-based sauce and curry powder or with a curry ketchup . It is assigned to the German cuisine . The sausages are mostly fine, pre-cooked scalded sausages with or without casing . This dish , which has been known since the post-war period, is mainly served in snack bars. It is also a popular offer in German company canteens and is also available as a ready-made meal for private households.

Over 800 million curry sausages are consumed in Germany every year. As currywurst sausages are also called regardless of where curry powder as an additive in meat is included.

In 2020, currywurst (in combination with French fries ) is the most popular canteen food in Germany for the 28th time in a row.

According to a widespread opinion, the currywurst was created in Berlin after the Second World War . The restaurateur Herta Heuwer , who has been running a snack stand on the corner of Kant- and Kaiser-Friedrich-Strasse in the Berlin district of Charlottenburg since the summer of 1949, claimed that the typical currywurst sauce was invented in September 1949, served with the fried sausage and with it the To have invented currywurst. She later provided her business with addresses such as: “1. Currywurst-Braterei der Welt ”and“ A Berlin specialty devised by us ”and in 1959 registered the word and image brand “ Chillup ”for their sauce - a contraction of chilli and ketchup , recorded on January 21, 1959 when the application was filed on January 21, 1959 February 1958 under the number 721319 as a trademark for “special sauce” [ sic! ] in the drawing roll of the German Patent Office - Heuwer incorrectly referred to this as a " patent ". According to Heuwer, the Kraft company (→  Mondelēz ) is said to have unsuccessfully sought the recipe and trademark rights from her. His entire life, Heuwer insisted on using neither ketchup nor a ready-made seasoning mixture, but rather mixing the sauce with tomato paste and carefully adding individual spices to taste. In her old age she had several television appearances and was celebrated as the "inventor of the currywurst". The German Currywurst Museum , which opened in Berlin in 2009 and will run until December 2018, followed this view. Since June 29, 2003, there has been a plaque in honor of Herta Heuwer at the former location of her snack bar (→ Kantstrasse 101; today an Asian supermarket). 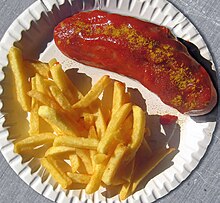 However, Heuwer cannot claim the development of the currywurst for itself. On the one hand, certain details of their presentation seem implausible. She wanted to remember exactly that on September 4th, 1949, when she first touched her sauce, it rained heavily, whereas according to the weather records it was said to have been a dry day. On the other hand, the role of the butcher Max Brückner from Johanngeorgenstadt in the Ore Mountains must be taken into account. He had come to West Berlin after the end of the war , had founded a company in Berlin-Spandau with some employees from home and had a self-developed process for the production of sausage without casing, which became known as "Spandauer without skin". At the beginning of the 1950s he teamed up with Frank Friedrich, who also came from the Ore Mountains. The Maximilian company they built still exists. Older versions of the website contained detailed descriptions of the company's history and the collaboration with Herta Heuwer. Accordingly, Heuwer's “first sauce creations” in 1949 did not lead to any great success. It was only together with Frank Friedrich that she developed the final recipe, which she then sold in her snack bar. However, this description emphasizes that the currywurst as a dish was Heuwer's invention, because the idea of ​​adding sauce was hers.

“Did Herta Heuwer invent the currywurst? Today there is no longer any doubt that this was the case. The combination of gutless 'Spandauer ohne Pelle' and her idea of ​​combining it with her own seasoning sauce, a ketchup, is clearly her idea. For the taste success, however, in coordination with Herta Heuwer, Frank Friedrich, today's senior and then junior partner of the company founder Max Brückner, is responsible, who was responsible for the final taste coordination of the sausage and the sauce. "

The success of Brückner's sausage without skin / skin was due to the distress of the post-war period. Natural casing was in short supply after the Second World War. For sausage production, the sausage meat (meat / fat mass) is pressed into a casing and stiffened there. This is how the sausage gets its shape. With the Brückner production method, the sausage got its shape without casing. The first customer was the Jankowitz family from Spandau. The “Spandauer ohne Pelle” was well received with the popular tomato sauce (based on Herta Heuwer's model). Later, when other snack vendors were selling this sausage, the name "Currywurst without gut" caught on.

Currywurst is prepared differently from region to region. Partly the sauce is warmed up and partly seasoned with curry powder. The consistency ranges from pasty to thin, in some areas or individual snack bars it is simple ketchup. 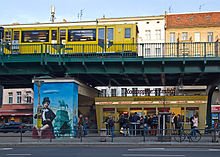 There are two basic variants of the Berlin currywurst: with or without casing. The sausages without casing are cylindrical and whitish in color, comparable to Bavarian wool sausages . Requirements for the quality of the Berlin currywurst were agreed between the Berlin authorities and the butchers' guild as early as 1951 ; this resulted in a so-called Berlin traffic opinion, which was later codified by the responsible state authority and published on August 20, 1967 in the Allgemeine Fleischer-Zeitung . According to this view, which was recognized decades later in Berlin, the sausage used must be a fine, non- cured and non- smoked sausage of medium quality with a maximum addition of five percent external water. Simple qualities or other sausages may therefore not be offered as “currywurst”, but rather, for example, as “bratwurst with curry” or “ steamed sausage with curry”. 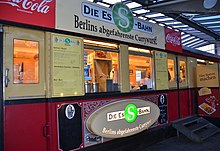 Both variants are first fried whole, usually about half of them covered with hot fat in a fat pan. When you hand in the sausage, it is cut into bite-sized pieces - some traditional snack bars such as Krasselt's Imbiß in Berlin-Steglitz only serve currywurst with an oblique cut. Both halves of the sausage are provided with a wooden piercer . Finally, the sauce is poured over the sausage and generously sprinkled with curry powder (or vice versa). Cayenne pepper (order: “hot” or “extra hot”) or crushed dried chili peppers (order: “with grains”) can be added on request . The addition of Worcester sauce or “hot onions” (chopped raw onions with chilli) may be desirable. A special ketchup based on tomato paste and spices is often made by the stand itself and is often given warm over the pieces of sausage.

In the 1960s, the currywurst became known in East Berlin - among other things through Konnopke's Imbiß . Was offered to East Germany produced only -times Currywurst without intestine sausages were already without intestine. The sausage was served uncut in one piece with curry powder and cold, thin ketchup (or cold, thick tomato sauce). One end of the sausage was left without sauce for consumption with the fingers.

The typical side dish is a small, soft roll that is particularly good at dipping the sauce. In East Berlin it was a normal roll or a slice of untoasted toasted bread . Other typical side dishes are French fries , often with mayonnaise , or fried potatoes.

The currywurst from the Volkswagen canteens in Wolfsburg is well known beyond the factory boundaries . The Currybockwurst has been available for consumption since 1973. In 2014, the VW butcher made 6.3 million pieces. The sausage has around 20 percent fat and contains neither phosphates nor milk protein . In this sausage, the sausage meat itself is seasoned with curry. This is mixed with pepper to the meat before smoking and cooking broth. VW currywurst and VW spice ketchup are also available in supermarkets in parts of Lower Saxony .

Currywurst as a ready-made meal

Currywurst is also available in stores as ready-to- prepare refrigerated food . The first product of this kind was launched by the Meica company under the CurryKing brand in the summer of 2002. It turned out to be very successful and after a short time contributed significantly to the increase in sales in the market segment for chilled snacks. Accordingly, comparable products were already available from numerous competitors in 2003. The currywurst is mostly in a plastic bowl that is modeled on a cardboard snack bowl and comes with a wooden fork . The pack is heated in the microwave or in a water bath. Before consumption, the dish is sprinkled with the enclosed curry powder.

In 1993 Uwe Timm published the novella The Discovery of Currywurst , in which the invention of the court is moved to Hamburg in 1947. In the story, the character Lena Brücker runs a snack bar at Großneumarkt in Neustadt , where she serves the first currywurst. Timm describes Lena Brücker as the fictional representative of “these wonderful women, of whom there were many. They did most of the reconstruction, they were very present at the time. ”Despite the fictional nature of the story, he remembers actually eating a currywurst as early as 1947 at a woman's snack stand on the Großneumarkt. However, there are no more concrete clues than the childhood memories of the author, who was born in 1940. The story was staged in 1998 by Johannes Kaetzler and Gerhard Seidel. In 2008 she was with Barbara Sukowa filmed .

When it became known that the memorial plaque for Herta Heuwer was to be installed in Berlin, some Hamburgers got excited about it under media support, including the Hamburger Morgenpost , which criticized the Berlin honor as presumptuous in a series of articles apparently to be understood as a joke. This resulted in the Interior Senator Ronald Schill unveiling a memorial plaque on a house on Großneumarkt (No. 10, corner of Wexstrasse). The memorial plaque is no longer there.

In 1982 Herbert Grönemeyer published the song Currywurst . The song performed in Ruhr German became a classic by the Bochum musician.