Curry powder or shortly Curry (  [ kœri ] ) are spice blends that the where Indian cuisine are modeled. They originated in Great Britain in the 19th century based on Indian curry dishes. From there they found their way into international cuisine. Curry powder is not used in Indian cuisine. 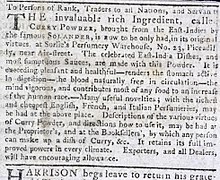 The oldest known advertisement for curry powder in Great Britain (1784)

The curry powder is a result of the cultural contact between British and Indian cuisine. Although there are ready-made spice mixtures ( masalas ) such as garam masala in Indian cuisine , these are usually used at the end of the cooking process to taste. Freshly ground spices, which are added individually at different times during the cooking process, play a much larger role. During the colonial era , the British came into contact with Indian cuisine. In the 18th century, returnees from the British East India Company brought Indian cuisine to Great Britain. When cooking Indian curry -Gerichten British cooks replace the needed spices simplicity through a finished blend of spices, which they called "curry powder" (curry powder) called. The term “curry” originally comes from Tamil ( kari ) and found its way into the English language via the Portuguese (from Portuguese-India ) caril .

An advertisement from a trader in London who advertised ready-mixed curry powder can be traced back to 1784. Curry powder only became really popular during the first half of the 19th century, when the English middle class began to get enthusiastic about curry dishes. Between 1820 and 1840, the import of turmeric , a key ingredient in curry powder, tripled into Great Britain. By 1850, most British cookbooks contained recipes that called for curry powder. 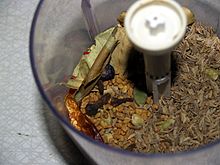 Curry powder is made up of a variety of spices.

The composition of curry powder varies; it consists of around thirteen different components, depending on the preparation. However, some spices can be found in most curry mixes, especially turmeric , which gives the curry powder its characteristic yellow color. Coriander , cumin , black pepper and fenugreek are also found in many mixtures . These spices also shape the typical taste.

In addition, there are different spices that are added from mixture to mixture, such as ginger powder , garlic powder , asafoetida , fennel , cinnamon , cloves , green cardamom , black cardamom , mustard seeds , nutmeg , mace , paprika powder , cayenne pepper or long pepper . There is also Madras curry powder, which often contains more chili powder , and Bassar curry powder , which is particularly popular in Kashmir . Both belong to the masalas.