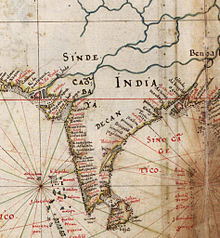 Map of Portuguese India from 1630 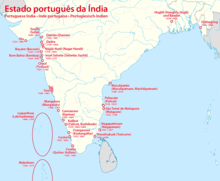 Coat of arms of Portuguese India

Portuguese India (in Portuguese : Estado da Índia ) was a Portuguese colony in India . At the end of Portuguese rule, Portuguese India consisted of three unconnected territories that bordered exclusively on the British colonial territory and later on the Indian Union : Goa , the capital of Portuguese India, and the two areas of Damão and Diu . Up until the 18th century, Goa was part of the administration of both the possessions in East Africa and the bases in East and Southeast Asia.

At the end of the Middle Ages, India was valued as the country of origin of the extremely sought-after and very valuable spices , even if Europe did not know much about the subcontinent . Since the fall of Constantinople to the Ottomans on May 29, 1453 , the spice trade was no longer accessible to Christian European traders; the Muslims now had the monopoly . The search for a trade route not controlled by the Muslims within the framework of the Indian trade therefore became an important part of the policy of the European trading nations, especially Portugal. Since the Muslims controlled the land route, this access could only be found by sea, for which the southern tip of Africa had to be circumnavigated. A first important step on this path was taken when Bartolomeu Diaz reached the Cape of Good Hope in 1488 . In 1498, Vasco da Gama finally reached India by sea .

The Portuguese began to take possession of areas in the Indian subcontinent from 1505 and set up trading bases there. From around the turn of the century (1500), merchant fleets, the " Portuguese India Armadas ", ran regularly between Lisbon and the Indian subcontinent every year . Since the way to Portugal, in the absence of modern communication links, was too long to be able to administer the Indian territories effectively from Portugal, the Portuguese established the "Estado da Índia" , the Indian state, under the reign of a viceroy appointed by the Portuguese monarch, who possessed far-reaching powers. Under the first viceroy, Francisco de Almeida and his immediate successor, the governor Afonso de Albuquerque ("Afonso the Great"), the Portuguese position of power was systematically expanded. In 1509, Portugal achieved complete naval control in the Indian Ocean by destroying an Arab fleet in the naval battle of Diu . In 1510 Afonso de Albuquerque occupied Goa . Diu became Portuguese in 1535 and Damão in 1588 .

Afonso de Albuquerque in particular understood that the small, poorly populated Portugal would not have been able to base its rule on land ownership. Under his leadership, the Portuguese therefore relied on their sea power. Albuquerque conquered and secured the most important bases on the African and Asian coasts of the Indian Ocean, so that in the event of danger, the Portuguese Indian squadron could be quickly relocated to the trouble spots. Sofala and the city of Mozambique in East Africa, Muscat and Hormuz at the entrance to the Persian Gulf , Goa and Cochin in India and Malacca on the Malay Peninsula formed the cornerstones of the Portuguese Estado da Índia and laid the foundations for maritime and commercial rule by the Portuguese in the 16th century Century in the Indian Ocean. Since the conquest of Aden failed, the old trade route through the Red Sea remained largely open to the Muslims, especially since the Ottomans occupied Aden in 1538.

The capital of the Estado da Índia was Goa, where the governor or viceroy had his seat. The governor or viceroy was the undisputed head of the military and civil government responsible only to the king. He was advised by a council from Fidalgos. Below were the judicial and financial authorities.

At the beginning of the 17th century the penetration of the Dutch and the English into South and Southeast Asia began. The Dutch avoided the Portuguese route to India and, thanks to improved geographical and astronomical knowledge, headed directly to what is now Indonesia from the Cape of Good Hope .

From 1756 the British began to conquer most of India. At this point Portugal had already passed the zenith of its power and could no longer oppose the British expansion. From 1802 to 1813, while the battle between the British and Napoleon raged in motherland Portugal and Portugal was then de facto ruled by the British military commander William Carr Beresford , Portuguese India was under British occupation.

At the end of the 19th century, today's India was divided into four political units:

The first two areas were able to fight for their independence from Great Britain in 1947 ( see also : Mohandas Gandhi , Jawaharlal Nehru ) and merged to form the Indian Union - albeit without the predominantly Muslim areas (see Pakistan ( Ali Jinnah ) and Bangladesh ) . Since its inception, the Indian Union has tried to incorporate the European colonies that still existed on the subcontinent into the new state. In 1954, French India was first integrated into the Union.

In 1946, Portuguese India was the first colony to receive the status of an overseas province , but this did not lead to any major changes in the administration. In 1954, local Indian nationalists took control of the Portuguese possessions of Dadra and Nagar Haveli and created a pro-Indian administration. India denied Portuguese troops access to the enclaves through its territory. In 1961, Portugal finally lost its last Indian colonies, Goa, Diu and Damão. They were occupied in a flash by the Indian army on December 18th. In Goa, 3,000 poorly armed Portuguese soldiers faced a superior Indian strength of 30,000 men. The Portuguese government under António de Oliveira Salazar was not ready to give up its Indian colonies and ordered the soldiers stationed there, in complete misunderstanding of the military balance of power, to defend themselves against the Indians. However, the local commanders saw that the resistance was futile and therefore offered little resistance to the Indian invasion. The NRP Afonso de Albuquerque was destroyed in a battle with Indian warships. Portuguese India ceased to exist after more than 450 years of Portuguese presence and was incorporated into the Indian Union .