Sofala is a former trading and port city in what is now Mozambique in the province of Sofala named after it . It was on an island in the Pungwe Delta . Most of the old city is now inundated by the sea. Today's insignificant fishing village Nova Sofala ( Neu-Sofala ) is a little higher. Only a few ruins of the old town can be found here.

The place is about 30 km south of Beira , on the same bay. Here the Pungwe flows into the Strait of Mozambique .

The city was probably founded in the 9th century and gained importance as a port from which the gold of the Munhumutapa Empire was collected and then transported further north. Sofala was the southernmost port in Africa, which Arab and African traders regularly called with their merchant ships. At times the place was under the control of Kilwa .

In 1489, the Portuguese diplomat and researcher Pêro da Covilhã landed in the port city. At the beginning of the 16th century, the Portuguese conquered the place and built the fortress São Caetano de Sofala here from 1505 to 1512 . The stones for the construction were imported from Portugal. Sofala was initially the first administrative seat of the Portuguese in Mozambique. As early as 1506, however, due to the unhealthy climate of the city located in the swamps, the administration was relocated to Ilha de Moçambique and the city experienced a steady decline. The reasons for the relocation and the decline were that the old gold trade from inner Africa had long since passed its peak. At the same time, the importance of new trading cities such as Quelimane and Angoche , as well as the trading cities on the Zambezi, increased . Since the port could only be entered at high tide due to its sandbanks and many Portuguese suffered from malaria through the swamps and the mosquitoes associated with them , it was also detrimental to the importance of Sofala. 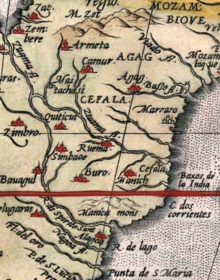 On the other hand, the city continued to be of great importance as a starting point for the Portuguese into inner Africa. The Portuguese believed that they discovered the biblical Ophir after discovering the city . Later they suspected the biblical Ophir, the gold mines of King Solomon and the home of the Queen of Sheba in inner Africa. These suspicions were fueled by reports and rumors from Greater Zimbabwe . For example, individual expeditions moved from Sofala to Zimbabwe for economic and religious interests , so that the Portuguese enjoyed a similar reputation as Eldorado enjoyed among the Spaniards. In 1569 Francisco Barreto von Sofala set out with a small army until 1572 into inner Africa to subjugate the Munhumutapa Empire . Despite the declining importance of the city, the governors of Portuguese East Africa carried the official title of "Captain of Sofala" until the 19th century. With the establishment of Beira in 1871, Sofala finally lost all meaning. The stones of the Sofalas fortress were demolished in the 20th century and used for the Cathedral of Beira ( Catedral Metropolitana de Nossa Senhora do Rosário ).

In the 19th century, the notorious “Sofala Path” ended in Sofala, a footpath across the Mozambique bush, which began at “ Crook's Corner ”, the triangle between Mozambique, South Africa and Zimbabwe . The area on the Limpopo River , which is still known today for its abundance of game, attracted poachers and outlaws back then , who could not be harmed by the police's pursuits , as they were able to flee quickly to one of the neighboring countries. The most famous of them was Cecil Barnard , also known under the pseudonym Bvekenya . The book The "Ivory Trail" describes its story. The rhinoceros horns , ivory and other trophies captured in excessive poaching were brought over the bush path to Sofala and embarked here.