Map of the Red Sea

The Red Sea ( Arabic البحر الأحمر al-Bahr al-ahmar ; Hebrew 'ים סוף Yam suf ; Tigrinya ቀይሕ ባሕሪ QeyH baHri ; Latin Mare Rubrum, Mare Erythraeum , ancient Greek Ἐρυθρὰ θάλασσα Erythrà Thálassa (translated Erythrean Sea , known under this name in Roman antiquity) is a narrow, 2240 km long, in the central Suakin trough up to 3040 m deep side sea of ​​the Indian Ocean between the northeast - Africa and the Arabian Peninsula . The volume of the sea is about 200,000 km³, the surface about 438,000 km² with an average water depth of 538 m.

The Red Sea marks a geologically highly active spreading zone with swelling magma (analogous to the Mid-Atlantic Ridge ) and has caused the African and Arabian plates to drift apart for 130 million years. The formation of a depression "only" became apparent 38 million years ago in the Oligocene , continues in the East African Rift and will lead to a new ocean in many millions of years . At the moment the sea is getting wider by 0.8 cm in the north and 1.6 cm in the south every year. After being isolated from the Indian Ocean several times , temporarily connected to the Mediterranean Sea and even drying out, the Red Sea only reached its present state almost 5000 years ago.

To the Indian Ocean, more precisely to the Gulf of Aden , the otherwise up to 360 km wide sea at Bab al-Mandab ( Arabic : "Gate of Tears") narrows to only 29 km and is connected to the Arabian Sea , the one Is part of the Indian Ocean . In addition, because of this narrowness, the sea floor is only 130 m below the water level. This threshold hampers the exchange of water enormously, which means that the Red Sea has an unusually high salt content of 4.2%, i.e. 42 g / l, (normal ~ 3.5%; in the North Sea near Sylt 3.0% to 3.2%) and has relatively few nutrients and a tidal range of only half a meter to one meter. This in turn leads to reduced plankton growth , which divers appreciate because of the often excellent visibility, also because of over 2000 km of coral reefs . In addition to coral gardens and walls, some famous wrecks attract the underwater enthusiasts.

Apart from occasional water inflows through intermittent inflows such as wadis , it is the only sea into which no perennial rivers flow. This also explains the good visibility under water and the high transparency for UV radiation, as there are few suspended matter in the water . At the threshold at Bab al-Mandab, 16 ° C cool deep water rises from the Gulf of Aden, which represents a biological barrier for some species. This is one explanation why there are no sea ​​snakes in all of the Red Sea .

The Red Sea Dam is a speculative macro-engineering proposal to shut off and lower the Red Sea by means of a dam from the 1960s that was taken up and expanded by the University of Utrecht in 2007.

The naming probably comes from the traditional system of designating cardinal points with colors. The name is attested for the first time at the time of the Persian Achaemenids : For those Iranian people this sea was in the south, which was symbolized by the color red. So the red sea meant "South Sea" (and analogously the Black Sea "North Sea"). Herodotus also called this sea the “Arabian Gulf” in connection with the construction of the canal of Necho II : for the later canal widening, which led in several turns from the isthmus at Ismailia to the end of the narrow strip of sea at Suez into the “Arabian bosom” he stated a distance of 1,000 stadia and added that “the Arab breast is what is also called the Red Sea”.

Strabo reports in his Geographica the views of Agatharchides on this name:

Occasionally the blue alga Trichodesmium erythraeum with its reddish-orange chlorophyll variant is used to explain the name : During periodic algal blooms, it can form entire carpets on the surface of the water. Travel guides often tell about the reddish shimmer of the sea and mountain ranges at sunrise.

The Red Sea colored on Vesconte Maggiolo's portolan map from 1541

It is also possible that the term “Red Sea” comes from a translation from ancient Greek . The ancient Greeks called the areas south of Upper Egypt “ Erythraia ” ( erythros, old Greek “red”), probably because of the red color of the soil there and the red sandstone that occurs there frequently . The sea in front of the Erythräa was therefore called the "Erythrean Sea", a name that was later extended to today's "Red Sea". The Romans literally translated the term "erythros" as "red". The present-day country of Eritrea was named after the Italian spelling of this word.

Another explanation goes back to the people of the Himyars , who ruled the southwestern Arab region in antiquity. The name "Himjar" is derived from the word "chumr", which can be translated as "red" or "the red ones". Accordingly, the "Sea of ​​the Himjars" became the "Sea of ​​the Reds". In the course of time it became "The Red Sea".

In the early 16th century it was common to color the Red Sea red on nautical charts . 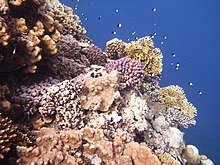 Fringing reefs are predominant only a few dozen to hundreds of meters off the coast or near the islands. In a few shallow spots, speckled reefs rise up , such as in the northeast of Hurghada , off Safaga , south of Ras Ghalib (also Marsa Ghalib, Port Ghalib) - like the Elphinstone reef - and south of Marsa Alam . Furthermore, there are three groups of reefs far off the coast, which are surrounded by deep water: northeast of Al-Qusair (also El Quseir) the Brother Islands ( Al-Akhawein ), southeast of Marsa Alam the Daedalus Reef ( Abu el-Kizan ) and on the border with Sudan , at the height of Al Shalaten , St. John's Island (Geziret Zabargad) and Rocky Island.

Due to the topographical distribution barriers and the special ecological situation with strongly changing conditions, a playground for evolution developed and many species are endemic . But there are also almost all species from the entire Indo-Pacific , although the fauna composition differs unusually strongly. You can find turtles , more rarely the whitetip deep sea shark , whitetip reef shark , gray reef shark and manta ray . The rare whale sharks usually only come in relatively small specimens of max. 5–6 m in front, the barely countable population of forktail manatees seems to be on the verge of collapse. Not one to forget in the enumeration napoleons , Büffelkopf- parrotfish (both are sometimes confused), PhD , Kaiser , lionfish , Ball and porcupine fish , blue spotted stingray , octopus and many more. Moray eels , some of which are extraordinarily large, can be seen snaking in open water, especially during the day, especially from the end of August to the beginning of September (probably the spawning season). Overall, the lower biodiversity compared to tropical areas is striking. Often you come across bottlenose dolphins and spinner dolphins on boat trips, and in rare fortunes while snorkeling and diving .

The species diversity of birds is naturally low, apart from a few cultural successors. Nevertheless, there are some ornithologically interesting representatives. So let Palm ( Streptopelia senegalensis , Eng. Laughing Dove) and collared doves ( Streptopelia decaocto , Eng. Collared Dove), the Great Caspian tern ( Sterna caspia , Eng. Caspian Tern) and the carbon black tern ( Sterna fuscata , Eng. Sooty Tern ) see. The coast Heron ( Egretta gularis , engl. Western Reef Heron, to 55 cm) is presented in a black, a white and a mixed version, also are beach rotor (engl. Sandpiperwedding) and Sperber ( Accipiter nisus , engl. Sparrowhawk) observed. Especially in the northern part of the Red Sea, the also rare kingfisher ( Alcedinidae , English kingfisher) can be spotted fall fishing on the seashore, while the African black stork ( Ciconia nigra , English Black Stork) can be seen more in the southern part. The endemic white-eyed gull is a specialty . With luck, ospreys ( Pandion haliaetus , up to 50 cm; sometimes shakes like a buzzard over the reef) with a strikingly white underside can be seen hunting over the reef. In spring and autumn the region is used for bird migration .

Before Hurghada , on the one hand, mass tourism , which is spreading rapidly to the south, and, on the other hand, water pollution from the discharge of untreated sewage, wild anchoring and coral bleaching have irreversibly damaged or completely destroyed many corals. It is believed that even in the southernmost parts, on the border with Sudan , the destruction will proceed rapidly. Lots of liveaboards make up a significant part of this. Illegal fishing on sheltered coral reefs is common, and even sea cow and shark meat is occasionally offered in Hurghada. The forktail manatee population appears to be on the verge of collapse.

The HEPCA (Hurghada Environmental Protection and Conservation Association) is a non-governmental organization founded in 1992 , which has taken on the protection of the Egyptian part of the sea with all animals above and under water. This includes the installation of over 1000 mooring buoys to prevent damage from wild anchoring.

On June 19, 2010 it became known that a previously undetermined amount of oil had leaked due to a leak on an oil platform near Hurghada (official bodies speak of 20-40 barrels, environmentalists assume a much higher pollution), according to the responsible oil company polluted the coastal area over a length of 160 km. According to official information, an oil spill about 20 miles long drifted off Hurghada's coast. On June 25, 2010, the Egyptian Ministry of Oil announced that the oil spill was probably not caused by a leak on an oil rig, but by an oil tanker that lost oil residue while cleaning it on the high seas.

In 2012, the local Dolphin Watch Alliance launched the Care for Dolphin awareness- raising project in the Red Sea Governorate . In 2013, the project led to an official code of conduct for dolphin watching tours and the temporary closure of the dolphins' resting places in the Hurghada area, which are threatened by mass tourism. In 2016, two marine protected areas were designated for the dolphins off Hurghada and have been patrolled since then.