The title of this article is ambiguous. 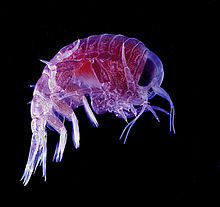 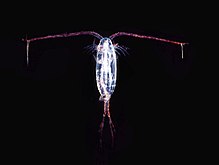 Plankton ( Greek πλαγκτόν "the wandering", "the wandering") is the name for the totality of the organisms that live in free water ("floating", with little or no movement) and whose swimming direction is determined by the water currents. Individual organisms in plankton are called plankters . Organisms that can swim against currents, on the other hand, are called nectons .

The marine biologist Johannes Peter Müller can be considered the founder of systematic plankton research. He began scientific research on these organisms on the island of Helgoland in 1846 ; at that time he called the plankton buoyancy . Also of great importance is the Kiel marine scientist Victor Hensen , who in 1889 led the first scientific expedition that dealt only with plankton.

In 2013, the first atlas for marine plankton was published in a cooperation between ETH Zurich and the University of East Anglia . According to Meike Vogt , data from half a million measuring stations were evaluated, which was only possible through international cooperation.

Plankton is almost ubiquitous in bodies of water. However, due to the low availability of nutrients, most marine areas are considered ecological deserts. If there is an excess of nutrients in stagnant inland and running waters , the rapidly growing plant plankton ( e.g. algae ) can lead to what is known as tipping over .

For plankton, a prerequisite for survival is its ability to float (secured for example by water turbulence, locomotion or floating organs, water or gas storage). Contact with the ground usually leads to death.

According to systematic affiliation

Depending on the affiliation of planktonic organisms to one of the realms in the system of living beings, one differentiates:

Plankton come in all shapes and sizes. The spectrum ranges from planktonic viruses and phages, which were only discovered using electron microscopic methods at the end of the 1980s , to jellyfish several meters in size . A uniform classification according to size has not yet established itself. Plankton is widely classified based on the order of magnitude of its linear dimensions:

Other classifications are based on the methods with which plankton can be caught and examined: Plankton with a minimum size of 20–65 µm can be caught with the help of nets; it is also known as network plankton . The smallest plankton that can be extracted with such plankton nets is called microplankton . It can be examined with light microscopes . Zoo and phytoplankton up to a maximum size of fractions of a millimeter are counted here, with different maximum values ​​being given, e.g. B. 0.2 mm or 0.5 mm. Some toxic microalgae from the dinoflagellates can multiply en masse and pose a threat to human health (→ algae bloom ).

In the case of nanoplankton with a size of a few micrometers, the water sample must be preserved by adding preservatives before the plankton is sedimented. The sedimented plankton can then be examined under the inverted microscope ( Utermöhl method ).

Picoplankton no longer sinks completely in the sedimentation chamber and is therefore not suitable for the Utermöhl method. Applied to filters with pores of 0.1 to 0.2 µm, it can be made visible with a fluorescence microscope after it has been colored . In the picoplankton there are mainly picozoa (only species Picomonas judraskeda ), which can make up up to 50 percent of the biomass in the nutrient-poor areas of cold coastal seas.

According to planktonic life stages

Species whose individuals spend their entire lives floating as plankton are part of the holoplankton . Some organisms, on the other hand, are only part of the plankton in certain stages of development ; this plankton is called meroplankton . These include B. floating eggs and larvae of fish or corals . Sessile animals living on the seabed are used in these pelagic stages for the distribution of the species.

Jellyfish are among the largest organisms in zooplankton

All planktonic organisms that do not photosynthesize but instead feed on other organisms are counted as zooplankton. A distinction is made between herbivorous and carnivorous species: herbivorous zooplankton include those species that feed directly on phytoplankton, zooplankton that feed on other zooplankton are referred to as carnivorous. These feeding relationships are linked to one another in the food web. The different types of zooplankton have widely varying reproduction and growth rates. As determining factors for the ecological niche occupied by a zooplankton species, their respective behavior as well as their respective geographical and vertical position in the sea could be identified.

The zooplankton plays an essential role as a food source for fish and many other marine life. Without the plankton of the arctic waters, the giant plankton-filtering baleen whales such as the blue whale or the fin whale lacked the basis of food. Copepods of the genus Calanus , together with krill, form huge amounts of animal biomass in plankton. Large areas of the sea are often discolored by the presence of plankton just below the surface of the water, giving fishermen clues about schools of fish that feed on zooplankton, such as herring and mackerel .

Single-cell diatoms make up the bulk of phytoplankton. The cells are surrounded by a two-part shell (theca) made of silica . According to various studies, the greatest amount of bound carbon is not bound in tropical forests , but in the plant plankton of the world's oceans .

Plankton is the basis of the marine and limnic food webs . The types listed below are some of the best-known representatives of this diet:

In the oceans driving waste from plastic so-called in recent decades by flow, weathering and other influences into smaller and smaller pieces, micro plastic decomposes. Some of these particles are similar in size, appearance and swimming behavior to plankton and mix with it, so that they are eaten by plankton filter feeders and can develop harmful effects. Microplastics are therefore sometimes referred to as plastic plankton , but they have also been discovered in the soil and drinking water.