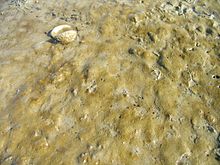 Diatoms often form coatings and mats on the bottom of the water, which can also be seen macroscopically

The diatoms or diatoms (Bacillariophyta) form a taxon of photosynthesis operated protists (Protista) and in the group of Stramenopilen belongs (Stramenopiles). The group is often referred to by the synonymous name Diatomea Dumortier, alternatively the synonymous names Fragilariophyceae, Diatomophyceae are also used. Some authors call the diatoms Bacillariophyceae, so they place them as a class in the photosynthetic representatives of the stramenopiles (Ochrophyta), which are then understood as phylum, this view is represented in the databases DiatomBase and WoRMS . This use is misleading, however, since other taxonomists list a more narrowly defined class Bacillariophyceae, as one of three classes within the diatoms. When using this name, the respective opinion must be checked, otherwise misunderstandings will arise.

Pennate and centric diatom;
From art forms of nature (excerpt)

German their trivial names owe the diatom of the cell cases (frustule), which consists predominantly of silicon dioxide ( empirical formula : SiO 2 is, dem) anhydride of silica (simplified empirical formula: SiO 2 · n H 2 O). In the German-speaking world, however, silica is often incorrectly equated with its anhydride. The organism gets the silicon dioxide from the monosilicic acid Si (OH) 4 . 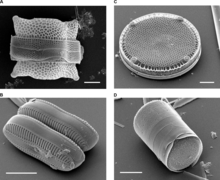 These secondary electron micrographs show the cervical and belt bands, at B the slit-shaped raphas can also be seen

The Frustel is box-shaped and consists of two bowl-shaped parts of different sizes, one of which ("Epitheka") reaches with its opening over the opening of the other ("Hypotheka"). The bowls are structured in characteristic patterns. Due to the shell geometry, two types of diatoms are distinguished: centric diatoms (Centrales) mostly have round, sometimes also triangular shells, while pennate diatoms (Pennales) form rod-shaped or boat-shaped, sometimes also arched or S-shaped curved shells. The shells are created using special peptides called silaffins . The silaffins enable the precipitation of silicon dioxide in small globular silicon dioxide aggregates, the so-called "nanospheres". These have a diameter of 30 to 50 nm and in their entirety form the actual shells. Many pennate diatoms can crawl on a firm surface with the help of a raphe . The speed is up to 20 μm / s.

Diatoms are unicellular and almost always not flagellated . Only in some species do the male gametes have a flagellum, a forward-pointing cilia flagellum . The plastids created by secondary endosymbiosis with a red alga are colored brown, as the xanthophyll fucoxanthin covers the color of the chlorophylls (chlorophyll a and c). Chrysolaminarin serves as a reserve substance .

As a rule, diatoms are microscopic in size. For example, the Achnanthes reaches a length of 40 micrometers. However, some species can grow up to 2 millimeters long.

The diatoms are diploid and reproduce mainly asexually by cell division. The daughter cells each receive a shell part and form the other part anew; the term “diatom” ( ancient Greek διατέμνειν (diatemnein) = to split) is derived from this. The new shell part is always the smaller mortgage, so that the cell size of almost all offspring continuously shrinks over the course of the generations, only the daughter cell line of the original epitheka retains the original maximum size. If the size falls below a minimum, the individual dies. However, before a minimum size is reached, sexual processes can take place. Haploid gametes are formed from the cells through meiosis . Oogamy has been proven in centric diatoms : the gametes become free, after a female and a male gamete merge, the zygote forms a permanent form, a so-called auxospore, with growth in size. Conjugation has been observed in pennate diatoms : two partners lie next to each other and form a common cytoplasmic bridge (“conjugation channel”) into which a haploid nucleus and a chloroplast of the two partners immigrate. The zygote formed in this way forms an auxospore in which nuclear fusion ( karyogamy ) takes place. A larger new diatom with a new two-part shell is formed from the auxospores of the centric and pennate diatoms.

Diatoms are mainly found in the sea and in freshwater in planktonic or benthic form , or they are found on stones or aquatic plants ( epiphytes ). Some species need pure and hardly polluted water and for this reason are also pointer organisms for unpolluted waters. Other types, in turn, Also referred to as the agricultural guild , are typical of bodies of water that are particularly polluted by agricultural inputs, e.g. by overfertilization. These are u. a. Navicula radiosa , Melosira varians , Nitzschia palea , Diatoma vulgare or Amphora perpusilla are counted. Even terrestrial species are found among the diatoms; these colonize soils and, in tropical areas, also leaves from trees.

The diatoms were traditionally divided into the radially symmetrical Centrales and the bilaterally symmetrical Pennales. The Centrales, however, are paraphyletic , a stable system based on molecular genetics has not yet been established. According to the taxonomic database Diatombase, there is currently no generally accepted sub-taxa classification of diatoms.

A widespread structure, but not recognized by all taxonomists, could look like this; the higher structure was adopted in a comparable form in the widely used classification of eukaryotes by Sina Adl and colleagues. 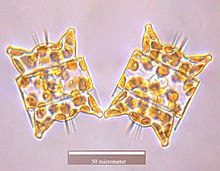 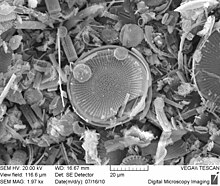 Preparation of various diatoms under the scanning electron microscope

The diatoms are the main component of the marine phytoplankton and are the main primary producers of organic matter, so they form an essential part of the base of the food pyramid . As oxygen- producing (oxygenic) phototrophs , they also generate a large part of the oxygen in the earth's atmosphere .

From the relative species composition of the diatom population of a water body, its degree of trophism can be derived quite precisely ( diatom index ), as well as other water parameters such as pH value , salinity , saprobism, etc. These methods can also be applied to sediments or oil deposits and then provide information the previously prevailing living conditions.

To identify the species, a specimen of diatoms is treated with sulfuric acid , hydrogen peroxide , potassium dichromate or another oxidizing agent and all organic components of the specimen are dissolved in this way. Only the pure silicon dioxide shells remain. These are embedded in an inclusion medium with a high optical refractive index (e.g. Naphrax ™) and identified with a light microscope using the phase contrast method at approx . 1000x magnification.

If the cells die, they sink to the bottom of the water, the organic components are broken down and the silicon dioxide shells form a deposit, the so-called kieselguhr (diatomaceous earth). This process, especially in the marine environment, is only efficient enough below the CCD ( Calcite Compensation Depth ) to form large deposits. The resulting diatomaceous earth is used in technology and medicine. Diatom shells are used, among other things, as a filter, for the production of dynamite , in toothpaste as a cleaning body, as a non-toxic insect control agent in the form of vermin powder , and as a reflective material in the color used for road markings in road construction. Diatoms are also used in forensic medicine ( diatom detection ). Their informative value for the proof of a drowning death is, however, controversial.

In the 19th century in particular, diatoms were used to make aesthetic microscopic specimens, and viewing them together in salons was a popular pastime in higher social circles. Johann Diedrich Möller from Wedel near Hamburg achieved the highest level of perfection in the extremely difficult craftsmanship of such preparations .

Marine diatoms can lead to poisoning in humans and animals, as some species, in particular Pseudo-nitzschia , Nitzschia or amphora, produce domoic acid . In filtering seawater organisms such. B. mussels , or species that feed on these animals, such as. B. fishing , these diatoms can accumulate. If such organisms enriched with domoic acid are consumed by humans, symptoms of poisoning occur, which are known as amnesic shellfish poisoning (ASP). Symptoms include memory loss , nausea , cramps , diarrhea , headache, and difficulty breathing .