The red algae (Rhodophyta, syn .: Rhodophyceae) are a division of algae , many of which are colored red by the phycobilins involved in photosynthesis . They form one of the three groups of the archaeplastida . Their reproduction is characterized by a tripartite generation change . All forms and stages are not scourged . The majority of red algae are found in the littoral zone of the sea, some species also in fresh water and in moist soil. Fossil they are since the era of Ectasiums known (around 1400 to 1200 million years ago).

The red algae are mostly multicellular and consist of cell threads that are attached to one another to form a plectenchyma (sham tissue) and can develop ribbon-like or lobed shapes. The cell wall consists of cellulose and a slime made of galactans , mostly agar or carrageenan . Single-celled species are only surrounded by a layer of mucus without cellulose. In contrast to other algae, flagellated stages are completely absent.

With multicellular red algae there is a structure in the middle of each partition that is traditionally referred to as a " pit connection ", but not like the pits in higher plants create a connection between the cells, but on the contrary a pore that in the centripetal formation of the cell wall initially remains open, closes.

The color of the red algae varies depending on the photosynthesis pigments present. Species of the littoral zone are olive-green to red-brown because, in addition to chlorophyll , they contain a lot of blue phycocyanin and carotenoids . Species of deeper zones contain a lot of red phycoerythrin and are colored red to purple.

On the thylakoids are 30 to 40 nm large, more or less spherical structures: the phycobilisomes . They contain water-soluble photosynthesis auxiliary pigments, the phycobiliproteins. The main mass consists of several variants of red phycoerythrin ; Allophycocyanines and phycocyanines also occur. The structure and pigmentation of the rhodoplasts indicate their relationship with the cyanobacteria . (see also endosymbiont theory )

The pigment phycoerythrin is photo-destructive. This means that this pigment is increasingly destroyed with increasing light intensity. This is the reason why many red algae living near the surface do not look red. With the help of phycobiliproteins, the red algae minimize the green gap in green plants and can also absorb "medium-wave VIS" (range of visual and, at the same time, mostly photosynthetically active radiation) and transfer it to the photosynthetically active chlorophyll a molecules. Since light with a wavelength of 380 nm to 550 nm (blue to green) is poorly absorbed by water molecules and their solutes, it reaches great depths (over 250 m). Phycoerythrin increases the absorption especially from 490 nm to 580 nm (from the light blue to the beginning of the yellow area).

The primary product of photosynthesis is mainly the sugar alcohol floridoside . The content of dissolved floridoside correlates with the salt content of the water and can account for up to 10% of the dry matter of the algae. This counteracts water loss through osmosis . The Reservepolysaccharid is the Florideenstärke , a polymer of the sugar moiety of the Floridosids. It is not stored in the plastids like the starch of higher plants , but on the surface of the chloroplasts or in the cytosol . Chemically, it is more closely related to animal glycogen than to vegetable starch.

The red algae live predominantly in the sea, and among the marine algae they are represented by more species than all other algae groups combined. However, they are largely limited to temperate to tropical latitudes, while brown algae and green algae predominate in cold sea areas . Thanks to the phycobilins, they can photosynthesize in greater water depths than other algae.

Around 178 species of red algae live in freshwater, which is slightly more than three percent of the total number of species. As far as is known, all species prefer flowing water (or at least moving water) and occur on the ground (benthic), mostly growing on hard substrates. As is typical for red algae, habitats that are relatively poorly exposed, for example water clouded by humic substances, are preferred. Some species prefer special habitats , for example cyanidium and galdieria in thermal springs in Italy. Most freshwater species are not colored red; there are yellow-green, blue-green, olive-green, violet, brownish to gray-black species; usually the phycoerythrin is covered by phycocyanin in them . Many freshwater red algae are sensitive to water pollution, some are considered threatened. In Europe, freshwater red algae are more species-rich in the northern latitudes than in the south; Most of the species (28) are found in Finland, 21 in Germany, 22 in Austria, and 12 in Switzerland. The most common and widespread genera are Audouinella , Bangia , Batrachospermum , Hildenbrandia and Lemanea .

Some red algae grow as epiphytes or as parasites on other algae. In the former, a distinction is made between optional epiphytes, which can also grow on dead substrates, and obligatory epiphytes, which can only thrive on a suitable host. The brush tuft algae is an obligatory epiphyte . Their spores germinate on the surface of the knotweed (a brown alga ). They form a rhizoid from which by means of digestive enzymes to penetrate into the host tissue and anchors the epiphytes. In contrast to mere epiphytes, parasitic red algae absorb nutrients from the host. In doing so, they can still photosynthesize themselves or, as full parasites, no longer develop their own photosynthesis pigments and be completely dependent on the nutrition provided by the host. An interesting example of a full parasite is Choreocolax polysiphoniae , which parasitizes the brush tuft alga, which in turn grows as an epiphyte on the knotwrack. Also Choreocolax penetrates into the host, but forms Tüpfelverbindungen to the cells to accommodate nutrients. Therefore one does not speak of a rhizoid here, but of a haustorium .

In addition to asexual reproduction by spores , red algae typically show a tripartite generation change in which gametophytes , carposporophytes (or gonimoblasts) and tetrasporophytes appear one after the other .

The female sexual organ, the unicellular carpogon, forms a thin, filamentous appendage, the trichogyne, which is used for contact with the male gametes (spermatia). The male sexual organ, the spermatangium, produces only a spherical or elongated spermatium surrounded by a sticky mass. In some red algae, this coating has fibrous appendages, which increase the chance of making contact with a Trichogyne. The trichogyne usually continues to grow until a spermatium attaches to it. The spermatia are - like all cells of the red algae - always not flagellated and are passively moved by the water current.

The carpogon contains two cell nuclei, one of which sits in the trichogyne and later disappears. The other, basal cell nucleus fuses during fertilization with the nucleus of a spermatium that was released into the trichogyne and migrates down through it. From the now diploid zygote the little-celled filamentous gonimoblast (also called carposporophyte) grows out. Due to the change in the core phase, this represents a new generation, but remains connected to the mother plant. It finally releases diploid carpospores, from which the diploid tetrasporophytes emerge as the third generation, most of which externally resemble the gametophytes of the first generation. Meiosis takes place in their tetrasporangia , and two female and two male tetraspores arise. The life cycle closes with the gametophytes that emerge from these.

There are many exceptions to this typical life cycle. In unicellular red algae such as the Cyanidiales and the Porphyridiales, no sexual processes are known, and the Bangiales show a two-part generation change in which the zygote directly forms the carpus pores, i.e. no gonimoblast is formed.

In Japan , purple tongs ( porphyra and pyropia ) are cooked as “ nori ” in soups or wrapped around sushi as whole plates. In Wales , laverbread , an algae paste made from cooked and chopped up porphyry , is consumed fried or served with mutton with orange juice.

Lappentang Palmaria palmata (French: dulce) has a slightly nutty taste and is eaten worldwide and made into an alcoholic drink in Russia.

Mineralized deposits are marketed in ground form under the name of algae lime as an auxiliary and fertilizer for agriculture and horticulture. In addition, they serve as a calcium supplement for humans and animals. The product is rich in the bulk elements calcium and magnesium as well as trace elements.

Since red algae contain a relatively large amount of calcium , they are added to some food surrogates in order to increase their calcium content. For example, rice milk can be used as a substitute for cow's milk . 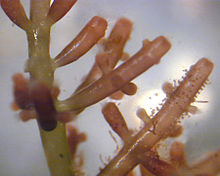 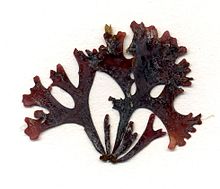 The red algae have been recognized as a separate taxon since the middle of the 19th century . Franz Joseph Ruprecht established the class Rhodophyceae in 1851 . Richard Wettstein classified the red algae in 1901 as Rhodophyta in the higher rank of a department . In the 20th century, the Rhodophyta or Rhodophyceae were mostly divided into two main groups, the Florideophyceae (Florideen) and the Bangiophyceae. However, recent molecular genetic studies have led to a more subdivided system.

Adl et al. proposed in 2012 a strictly phylogenetic classification that dispenses with any rank:

However, most phycologists did not take up this irrelevant classification. In the "Syllabus of Plant Families" from 2017, Kamiya et al. the red algae as follows: (Species numbers supplemented according to AlgaeBase, as of July 2018)

Department Rhodophyta , with about 7130 species.

Research into the systematics of red algae is still ongoing. Through the molecular genetic studies, new species are discovered every year and further changes to the classification are necessary.

For the red algae found in the German Bight, see the list of marine algae from Heligoland .