The liquid components of the cytoplasm of the eukaryotic and prokaryotic cells are referred to as the cytosol ( ancient Greek κύτος kýtos 'cell' and Latin solvere, solutum ' to solve', 'to dissolve'), also called cytosol .

The cytosol consists of about 70% water as well as the ions dissolved in it , small molecules and larger water-soluble molecules such as proteins. The protein content of the cytosol is 20–30%. Depending on the cell type, 25–50% of the total amount of protein is in the cytosol. Part of protein biosynthesis , translation , takes place in the cytosol . In addition, glycolysis , many steps in protein breakdown and many reactions of the intermediate metabolism of the cell take place here. This includes, for example, the synthesis and degradation of nucleotides or amino acids .

In eukaryotes, the cytosol is traversed by a network of thread-like structures (filaments) such as actin filaments , intermediate filaments or microtubules , which in their entirety form the cell skeleton ( cytoskeleton ).

In prokaryotes , the DNA is freely present in the cytosol, since these have no compartmentalization . Due to the dense accumulation of macromolecules in the cytosolic aqueous saline solution, the cytosol is referred to as a gel rather than an actual solution. 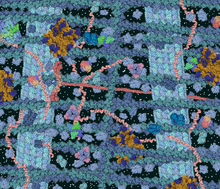