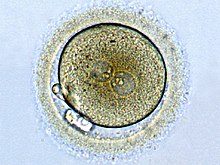 Zygote: Single cell shortly after being fertilized by a sperm. The paternal and maternal cell nucleus move towards each other, but they are not yet fused.

Fertilization of the human egg by a sperm (left) and formation of the zygote (right). An egg cell can only be fertilized by a single sperm. That is why the zygote contains exactly two sets of chromosomes, one maternal and one paternal. This allows the subsequent mitotic divisions to take place harmoniously in the course of embryonic development . The middle part of the sperm, which contains its mitochondria, does not usually get into the zygote, but gets stuck in the shell or is rejected.

A zygote is a eukaryotic diploid cell that is formed during sexual reproduction by the fusion of two haploid sex cells ( gametes ) - mostly from an egg cell (female) and a sperm (male). This union of the sex cells , in which the two cell nuclei also fuse together ( karyogamy ), is called fertilization . In most living beings, the zygote produces a diploid organism through multiple mitotic cell divisions. In the further course - sooner or later - the transition from the diploid to the haploid state takes place in some cells through meiosis , in which gametes are finally formed again.

Christian Gottfried Ehrenberg first observed the formation of a zygote in a mold in 1820 .

The zygote arises in humans and in mammals through fertilization in the fallopian tube . In the zygote, the cell nuclei of the egg cell and sperm unite , so that the nuclear DNA ( nuclear DNA ) of both parents is brought together. The middle part of the sperm usually does not penetrate the egg cell, which is why the paternal mitochondrial DNA (mtDNA) in it is not passed on to the offspring, but the maternal mtDNA in the egg cell is. The zygote gives rise to the first embryonic stages, i.e. the two- and four-cell stage, from which the morula and blastula ( blastogenesis ) emerge , which migrate through the fallopian tubes towards the uterus during their development . The blastocyst then implants in the uterus. In the case of birds , reptiles and most of the tailed amphibians too , fertilization takes place in the womb after copulation ; the zygote is then excreted as an egg . In contrast, frogs and most fish release the unfertilized egg cells into the water as spawn , and the zygote is then created there through external fertilization. There are also invertebrates with internal fertilization ( insects and crustaceans ) and those with external fertilization (e.g. hollow animals ).

In seed plants , the zygote is located in the ovule . It arises when the haploid pollen grain forms the pollen tube after pollination , this grows into the ovule and fertilizes the egg cell there. The embryo then develops from the zygote as part of the seed . In ferns , the zygote arises in an archegonium (female sexual organ), which is formed by the small haploid prothallium and contains an egg cell that is fertilized by sperm-like spermatozoids , which are released from the antheridium (male sexual organ) and require water through the they can swim to the archegonium. The actual fern plant then emerges from the zygote. In mosses , the actual plant is haploid, and on it sit the sexual organs ( gametangia ), which, like in ferns, contain egg cells or release spermatozoids. A relatively small diploid sporophyte then emerges from the zygote , which (like the diploid fern plant) forms haploid spores after meiosis , which are used for reproduction.

The fungi show a great variety of conditions and sometimes considerable deviations from the other organisms . The mushrooms , to which most edible mushrooms belong, do not form any sexual organs or gametes. In them, ordinary cells of the thread-like haploid mycelia fuse to form binuclear daughter cells without the cell nuclei initially fusing (karyogamy). The subsequent binuclear (dikaryotic) stage can last for years, during which the mycelium continues to grow until it finally develops fruiting bodies . Only in these then does karyogamy and thus the formation of zygotes take place. This is followed by meiosis and the formation of haploid spores.

In the yoke fungi , which do not form fruiting bodies, but only exist as coenocytic mycelia with many nuclei, but without separating cell walls , multinucleated outgrowths fuse to form a multinucleated coenozygote, in which a paired karyogamy takes place and which then forms a multinucleated zygospore with the formation of a thick wall becomes.

Zygote of the thread-like green alga Spirogyra sp. (In the center of the picture)

Most unicellular organisms reproduce asexually and therefore do not form zygotes. Exceptions are many flagellates . In simply organized, thread-like algae , individual cells of the thread differentiate into sexual organs, and the zygote is then a cell of the algae thread.