The caudate amphibian (caudata; also: urodela which sometimes only refers to the crown group ) are one of three orders of amphibians . In purely colloquial terms, they are often divided into salamanders and newts , depending on whether they are more adapted to rural life ("salamanders") or show a greater connection to the water as a habitat, for example through the flippers on the tail ("newts"). However, the so-called salamanders are also often dependent on bodies of water for oviposition or larval development. Conversely, many newts spend part of their lives on land. From a systematic point of view , these two colloquial terms are therefore rather unsuitable.

The body length ranges from barely more than three centimeters (some species of the Mexican genus Thorius , lungless salamanders) to the giant salamanders, which are sometimes more than one and a half meters long, which are also the largest amphibians of our time.

All tailed amphibians have an elongated body and a tail, which - depending on the species systematic affiliation or the seasonal phase of life - can be rounded or laterally flattened in cross-section and provided with skin borders. With the exception of the arm newts, which have no hind legs, all tailed amphibians have four limbs of roughly the same length, on which the animals - provided they are on land - move around (not hopping or jumping like frogs ).

Certain features in the rest of the bone structure (for example, structure and, with 30 to 100 pieces, a much larger number of vertebrae) as well as in the formation of teeth in the jaws are all common or separate them from the frogs. In contrast to most frogs, tailed amphibians still have free ribs (exception: giant salamanders); Their shoulder and pelvic girdles are predominantly cartilaginous and less firmly connected to the spine than in the anura .

Newts and salamanders generally lack the eardrum and middle ear . The sense of smell is likely to play a greater role than in frogs and toads.

Adult tail amphibians usually breathe with their lungs and through their skin; In the lungless salamanders, however, gas exchange only takes place via the skin and the mucous membranes of the oral cavity.

Unlike the frogs, in which the spawns are inseminated externally , tail amphibians practice indirect internal fertilization (apart from the Cryptobranchoidea, which have other characteristics). To do this, the female usually ingests a sperm packet ( spermatophore ) previously deposited by the male with his cloaca . Many tail amphibians lay eggs in water and spend a larval phase in the water; only a few are viviparous ( ovoviviparous ). Most representatives of the most species-rich family of the lungless salamanders (Plethodontidae) deposit their eggs on land.

The larvae living in the water ( only the larvae of the frogfish are called " tadpoles ") usually have outer gill tufts and initially develop the front extremities . Unlike tadpoles, their diet is exclusively carnivorous .

A special phenomenon is the neoteny , in which larvae do not reach a complete metamorphosis to the land animal, but retain larval characteristics throughout their life. This phenomenon, also known as pedomorphism (“child figure”), is not uncommon. The best known examples are the axolotl and the grotto olm .

Another characteristic of many amphibians, including adults, is their ability to regenerate lost limbs or the tail. In the case of the frogs this only works in the development stage of the tadpole.

Worldwide distribution of the tailed amphibian

Tail amphibians are mainly holarctic , i.e. widespread in moderately temperate to subtropical regions of the northern hemisphere . Nine out of ten families can be found in the USA alone . Only some of the lungless salamanders (Plethodontidae) in Latin America also reach the tropics and cross the equator .

Specifically, North, Central and Northwest South America, Europe, the extreme Northwest of Africa and parts of Asia are settled. There are no tailed amphibians in Australia.

"Urodela" is considered by some authors to be the scientific name for the amphibian amphibian which is valid according to the nomenclature provisions; in the American-speaking world, however, the name "Caudata" is mostly used.

The order is divided into three superfamilies. The most primitive are the Cryptobranchoidea ( giant salamander and Asiatic salamander ), which occur in East Asia and North America and can be partly 1.5 (1.8) meters long, and also aquatil living sirenidae (Sirenoidea) from the southeastern United States. In by far the largest superfamily, the salamander relatives (Salamandroidea), all salamanders and newts occurring in Europe are represented.

About 580 species are currently known, although this number may constantly change slightly due to phylogenesis research.

The following table shows a system of the recent tail amphibians with all genera and also a selection of species (Europe with around 40 species as complete as possible). The superfamilies and families are sorted alphabetically according to the scientific name. The taxa from the family Salamandridae that occur naturally in Germany, Austria and Switzerland are highlighted in bold. 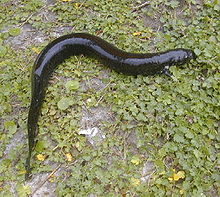 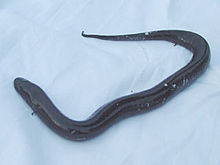 As with frog amphibians and crawling amphibians , the oldest fossils come from the tribal group of the tail amphibians from the Triassic . Triassurus sixtelae is around 230 million years old, was found in the Madygen Formation in southwestern Kyrgyzstan and scientifically described in mid-2020. The species shares some original characteristics with the extinct Temnospondyli , particularly with the Branchiosauridae and the Amphibamidae . Marble peton from the middle Jurassic of England, also a core group representative, was likely entirely aquatic. Chunerpeton comes from the Central Jurassic of Inner Mongolia and is related to the recent giant salamanders (Cryptobranchidae). The oldest known salamander relative (Salamandroidea) is Beiynerpeton , whose fossil remains , around 157 million years old ( Upper Jurassic ) were found in the Tiaojishan Formation in the Chinese province of Liaoning . 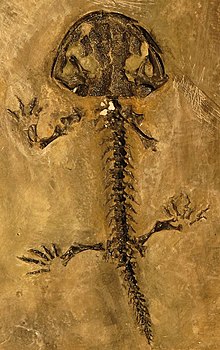 Karaurus comes from the Upper Jurassic of Kazakhstan . Almost complete skeletons of this genus have been passed down, which suggest that the approximately 12 cm long animals were terrestrial. The tiny, fragile skeletons of the tail amphibians were rarely preserved in the rocks of the Mesozoic Era. However, since prehistoric salamander fossils are increasing in Central Asia, it stands to reason that the roots of the salamander are in this region. The extinct Batrachosauroididae , which only occur in North America , appeared in the late Jurassic, resembled the Olmen (Proteidae) and, like them, were probably aquatic. They can be detected up to the early Pliocene . In the Upper Cretaceous occurred to Armmolchen (Sirenidae) similar family with two genera, Prosiren from Texas and Ramonellus from Israel. Like the arm newts, the animals were elongated and lacked their hind legs. It is still unclear whether they are really more closely related to the arm newts. Valdotriton from the late Barremium of Spain is known for six complete skeletons and belongs to the salamander relatives, without being able to be assigned to a recent family. Anatomically, the genus mediates between the Olmen and the other salamander relatives. In the Upper Cretaceous two families that still exist today appeared, the eel newts (Amphiumidae) and the arm newts , as well as the Scapherpetontidae , which disappeared again in the early Eocene . Proamphiuma from Cretaceous deposits in Montana is the earliest known eel newt and predecessor of the recent genus Amphiuma . Fossil arm newts are Kababisha from Africa, Notoerpeton from South America and the large Habrosaurus genus from North America, which survived until the early Paleocene . Younger arm newts are also known from Africa. The recent genus Siren has been found in North America since the middle Eocene and the pygmy newts ( Pseudobranchus ) appeared in Florida in the Pliocene. The Scapherpetontidae occurred in North America from the late Cretaceous to the early Eocene. Scapherpeton and Piceoerpeton were similar to the recent salamander genus Dicamptodon , Lisserpeton had an elongated body and reduced legs. The giant transverse newts (Dicamptodontidae) appeared in North America after the extinction of the Scapherpetontidae and, like their current representatives, seem to be associated with the redwood flora.

The giant salamanders (Cryptobranchidae), the olms and the real salamanders (Salamandridae) appeared in the Paleocene. The recent genus Cryptobranchus left behind fossils from the Paleocene in Saskatchewan and was also found in the Pleistocene of the Appalachians. Fossils of Andrias , the second genus of the giant salamander, have been found in Europe, North America and Japan, with Andrias Scheuchzeri from the Upper Oligocene being the oldest species of the genus. No fossil finds of the angular- tooth newts (Hynobiidae) have been found so far. The Olms appeared in the late Paleocene in North America and in the Middle Miocene in Europe. Some fossils can be assigned to the recent genera Necturus and Proteus , others two newly introduced extinct genera. The genus Ambystoma has occurred in North America since the Eocene and is common in Pleistocene fossil sites. The family of the real salamanders and newts (Salamandridae) is particularly well represented in the fossil record. 18 genera and more than 50 species are known. The recent genus Salamandra and the crocodile newts ( Tylototriton ) are already known from the Eocene, Taricha and Triturus from the Oligocene and Notophthalmus from the Miocene. The fossil record of the most species-rich salamander family , the lungless salamander (Plethodontidae), on the other hand, is extremely sparse and of the six named fossil genera, four are only known from the Pleistocene. Some vertebrae of the animals were found in Montana which are dated to the early Miocene and footprints of a lungless salamander found in California date from the early Pliocene.