The chordates ( [ˈkɔrda] -; Chordata) are a tribe of the animal kingdom . The chordates include the sub-tribe of the skull (Craniota) or vertebrate (Vertebrata), and thus also the mammals (Mammalia) including humans , as well as two lesser-known sub-tribes living exclusively in the sea, the skullless (Cephalochordata or Acrania) and the tunicates (Tunicata or Urochordata).

The Chordate tribe includes over 56,000 species (54,711 vertebrate species, 30 skullless species and 1,600 tunicates), of which more than half - mainly bony fish species - live in the water.

All chordates show a number of common derived features ( synapomorphies ). In adult vertebrates and tunicates, these can be modified to a greater or lesser extent, but they can still be clearly recognized in the larvae or embryos . Common to the chordata is the eponymous chorda dorsalis (a rod-shaped supporting apparatus in the back), the neural tube (a nerve cord lying above the chorda), the gill intestine (the foregut expanded into a filter apparatus), the heart on the abdomen , which pumps the blood forward to the head , and the intestine below the notochord, which opens outwards on the belly side and behind it creates space for the postanal tail .

The development of the term chordata (back string animals, chordates) went in three steps through all three major European scientific languages ​​of the 19th century. The beginning was in a book by the very influential German zoologist Ernst Haeckel from 1874.

Ernst Haeckel had invented the Germanized word "Chordathiere" and at the same time provided it with a Latinized synonym. This foreign word was not "Chordata", but "Chordonia". A few pages later, Haeckel explained what he meant by “Chordathieren” / “Chordonia”.

“We want to call this worm form, which was mainly characterized by the possession of the axis rod or the chorda, as Chordathier ( Chordonium ). As two diverging lines, the ascidia on the one hand and the vertebrates on the other developed from these Chordonians. "

From the quote it emerged that Haeckel did not mean recent organisms with the expression "Chordathiere" / "Chordonia", but the extinct ancestors of the later vertebrates ( Vertebrata ) and tunicates ( Tunicata ). In his opinion there were no living chordathiers / chordonia. Haeckel also counted lancet fish among the vertebrates, which had also only developed from Chordatians / Chordonia. Haeckel's fine conceptual difference between extinct Chordatians / Chordonia and later Chordatians / Chordonia descendants (vertebrates and tunicates) was lost as early as 1875. In that year his former Swiss student Hermann Fol published a short essay on the origin of germ cells.

With Fol's French treatise, "Chordés" was used for the first time as a group name for tunicates ("Tuniciers") and vertebrates ("Vertébrés"). With the word, Hermann Fol deviated from the conception of his former professor: "Chordés, à savoir les Tuniciers et les Vertébrés." However, it was not just the shift in the terminology, but also the word form "Chordés" that influenced the further history of the term. Because the French word creation could have referred to “Chordathiere” as well as to “Chordonia”. Until 1875, a French word form of "Chordathiere" had not yet been introduced. And just a few months earlier, “Chordonia” was used for the first time and in two sentences in a presentation to the Association Française pour l'avancement des Sciences , to which Hermann Fol, however, did not belong. According to Hermann Fol's treatise, "Chordés" now referred to that group of animals that included tunicates and vertebrates. His text soon came into the hands of the British zoologist William Sweetland Dallas , who immediately prepared a translation that appeared that same year.

- William Sweetland Dallas (translator) : On the primary Origin of the Sexual Products

William Sweetland Dallas had decided that the French "Chordés" was derived from Haeckel's German "Chordathieren". At the same time, however, he had discarded the possibility of using Haeckel's internationalizable “Chordonia” here. So the British zoologist simply Latinized “Chordathiere” again - now to the word “Chordata”. And within the translation text he inevitably used “Chordata” in the sense of Hermann Fol: In 1875 William Sweetland Dallas had coined the term Chordata (back string animals, chordates) with today's word form and meaning. 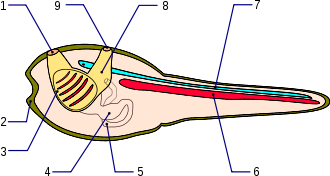 The chorda dorsalis ( Latin : back string), also called notochord in English, is the eponymous and main characteristic of the chordates. It functions as an endoskeleton and is an elongated, flexible rod that emerged as a protuberance of the ancient intestine (archenteron). It is therefore above the intestine and below the neural tube . It has the same ontogeny in all chordates , which is controlled by the Brachyury gene . It cannot be determined whether the notochord originally only extended over the tail area or over the entire body. To the side of the notochord there are longitudinal muscles that, in original chordata, can move the body and the oar tail in waves and serve for locomotion. During its ontogenesis, the chorda goes through a phase called the coin-stacking stage, in which it consists of cells compressed like discs. The notochord of the lancet fish remains in this stage and is only supplemented by muscle fibers. In the larvae of the tunicates and in the vertebrates, free spaces arise between the cells, which in the larvae of the tunicates merge and form a continuous channel that is surrounded by epithelial cells . In the larvae of the tunicates, the notochord extends only over the tail area. The notochord of vertebrates is displaced by the spine in the course of ontogenesis . A remnant of the notochord are the nuclei pulposi in the intervertebral discs of the higher vertebrates.

In the frogs and various groups of primeval land vertebrates , u. a. the Temnospondyliern and Reptiliomorphen as the Anthracosauriern , the formation of the can vertebral bodies in the course of human evolution be very much delayed, so that in some fossil forms, especially those that also other neotene have characteristics even in the adult stage there is a notochord as a strand and sometimes can be proven fossil. The vertebral bodies of these groups that have been preserved as fossils often have a perforation parallel to the longitudinal axis of the body, the chordal canal, which indicates the previous position of the chordal cord.

In the transparent sea squirt, Clavelina lepadiformis , the gill gut is clearly visible.

The neural tube is formed by the invagination of an elongated area of ​​the ectoderm , i.e. an outer layer of cells, and is therefore located between the outer skin and the notochord. It is initially open on both sides and connected to the outside world via an anterior (rostral) and caudal neuropore. In embryos, the neurenteric canal connects the primitive intestine and the neural tube. In the larvae of the tunicates, the neural tube extends only over the front part of the body.

The heart lies ventrally (on the stomach side) and pumps the blood forward to the gill intestine. It then flows backwards via vessels located dorsally (on the back). In the case of the gill animals (Hemichordata) and the primal mouths (Protostomia) it is exactly the opposite.

The gills intestine is for filtering plankton and detritus converted foregut . It is connected to the outside world through openings - the gill slits. This is where the gills develop in vertebrates; in terrestrial vertebrates, the gill gut is only embryonic.

In contrast to acorn worms , which ingest the food that is gummed up on the surface of the body through gill pores and then suck it through the gill intestine into the intestine, chordates take their food through the mouth, filter out the food particles in the sieve-like gill intestine, cover them with mucus and give them via the endostyle , a strip of eyelash and gland cells, into the digestive tract. The water ingested with food is expelled through the peribranchial space and the cleft gill. In vertebrates - the only exception here are the original state preserving larvae of lampreys - serve the gill slits only to breathing. The endostyle, which already releases iodine- containing hormones such as thyroxine into the blood during the original chord dates, became the thyroid gland .

The chordates belong to the Neumündern (Deuterostomia), those two sides symmetrically constructed animals (Bilateria) where in the embryonic development of the intestine of the primitive mouth (blastopore) becomes the anus and the mouth secondarily from the primitive gut breaks (archenteron). The chordates are within the Neumünder the sister group of the Ambulacraria , a taxon that unites the echinoderms (Echinodermata) and the worm-like gill animals (Hemichordata).

There are two hypotheses for the origin of the chordates from primitive new mouths:

According to the tornaria hypothesis, the chordates arose from modified tornaria larvae of the gill- lobsters (Hemichordata). According to this theory, the notochord is homologous to the dorsal nerve of the glans worms (Enteropneusta). The chordates are normal bilateria, the anatomy of which has been supplemented by chorda, neural tube and endostyle. Your back side corresponds to the back side of the hemichordata. The differences in the dorsoventral organization of the chordates and that of other bilateria are not explained in this way.

The hypothesis of dorso-ventral inversion is based on the fact that the arrangement of the organs of chordates is often the opposite of the arrangement of organs in non-chordates. She assumes a rotation of the chorus data body into a supine position. This explains one of the most important apomorphies in chordates, the dorsal position of the main nerve cord. The nervous system of most other animals, e.g. B. the arthropod and the annelid are located ventrally ( abdominal marrow ). 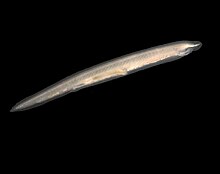 There are two alternative hypotheses for the internal systematics of the chordates. In the older, notochordata-urochordata hypothesis, the skullless and vertebrate animals are sister groups and together stand opposite the more primitive tunicates. This is shown in the following cladogram :

According to this hypothesis, the most original chordates had a direct development, were also free-swimming as adults and the adults of the tunicates developed into sessile (fixed) forms only secondarily (later) in their history.

However, the characteristics of the notochordata could also be plesiomorphic characteristics of the chordates, which were secondarily reduced in the tunicates. Since they lost over half of their Hox genes during their development , it is likely that they are oversimplified animals. Vertebrates and skullless animals would correspond more closely to the original chord data, while the tunicates would be strongly derived through their secondary simplification. Another argument against the notochordata-urochordata hypothesis is that the skullless are very uniformly segmented and that no stage occurs in the ontogeny of vertebrates that corresponds to this.

The alternative Olfactores-Cephalochordata hypothesis sees the tunicates as strongly derived relatives of the vertebrates. The skullless are basal here. 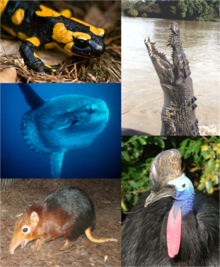 The most primitive chordates, like tunicates, may have had a two-phase development cycle: a free-swimming larva and a sessile adult. In this case the olfactores (tunicates and vertebrates) would have evolved from the swimming larvae of the most original chordata.

There are first fossil records of chordates with Haikouichthys and Myllokunmingia from the Lower Cambrian of Yunnan ( Maotianshan slate ) and with Metaspriggina and Pikaia from the Central Cambrian Burgess slate about 505 million years ago.

The chordates could also include the vetulicolia , strange Sub-Cambrian animals that consist of a voluminous front part and a rear part consisting of seven segments. They are constricted between the front and back.