The title of this article is ambiguous. Further meanings are listed under Embryo (disambiguation) . 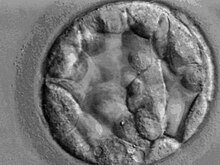 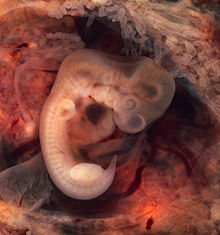 Human embryo in the 6th week pc (8th week of pregnancy); from an ectopic pregnancy . The crown-rump length is about 9-13 mm.

Human embryo in the 7th week pc (9th week of pregnancy). The crown-rump length is about 16-18 mm.

The or the embryo ( ancient Greek ἔμβρυον Embryon ; from ἐν "Young", "Newborn", "Unborn" s "in" and βρύειν bryein "sprout let swell", plural: embryo or embryos ), and the seed or seedling , is a living being in its early stages of development.

In humans and animals , the egg cell fertilized by a sperm , the zygote , develops into a new organism. This is called an embryo as long as it is in the mother or in an egg shell or egg shell.

In the prenatal development of humans, the early phases up to the formation of the internal organs ( organogenesis ) are referred to as the embryonic period and the months following this - from the ninth week of pregnancy after conception - as the fetal period . This is how the fetus or fetus is distinguished from the less developed embryo . Within the embryonic period can be scientifically the actual embryonic phase - between the fourth and eighth week of development  from a - präembryonalen phase differentiate.

The pre -embryonic phase of the embryonic period in humans includes the first three weeks of development. In the first week p. c. The zygote develops through furrows over 2-, 4-, 8- and 16-cell stages the morula and from this the blastocyst , which anchors itself in the uterine lining ( nidation , about 6th day). The blastocyst shows a differentiation into cells of the outer trophoblast and the inner embryoblast .

The two parts develop differently in the following. While the trophoblast creates protective, nourishing and nourishing structures for the germ , the embryoblast continues to develop into a germinal disc with first two and then three germ layers at the end of the third week of development. This three-leaved embryonic disc then folds at the beginning of the fourth week into an early form of the embryo - with the start of the embryonic phase. From the extraembryonally named portions are u. a. The membranes, placenta and umbilical cord that are separated from the child after birth ( afterbirth ).

Legal meaning of the embryo

The term embryo can be used in the legal sense to define the belonging of cells to an independent living being, in particular one that can develop into a human being and therefore enjoys special protection.

In his 2014 opinion, the Advocate General of the European Court of Justice ( ECJ ), Cruz Villalón, defined the human embryo as a being that can develop into a human being from the moment of fertilization. In contrast to this, the Luxembourg judges also previously considered unfertilized egg cells that were stimulated to divide as embryos.

According to German law, the embryo is only considered to have been received once it has implanted in the uterine lining (nidation). Before that, he has the legal status of a nondum conceptus (“not yet received”), then that of a nasciturus (“will be born”) until birth.