Placenta is a redirect to this article. For further meanings, see Placenta (disambiguation) .

Placenta in the human body 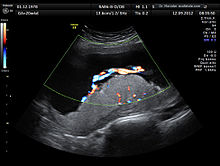 Ultrasound image of the placenta and umbilical cord showing the three umbilical cord vessels using the color Doppler method, with 20 weeks of pregnancy

The placenta ( lat. Placenta , cakes', dt. Also placenta or "fruit cake") is an all female higher mammals ( Eutheria ), including the people and some marsupials ( Metatheria ) during gestation (or pregnancy ) evolving fabric of the wall of the uterus , which belongs to the embryonic organism, is formed by it and is interwoven with blood vessels from the mother and the embryo. The embryo (later the fetus ) is indirectly connected to the mother's bloodstream, receives nutrients and oxygen and releases waste products. After delivery, the placenta is expelled together with the egg membrane as an afterbirth . The yolk sac placenta of the basic sharks represents an analogous structure , which, like the placenta of mammals, serves to supply the embryos .

In contrast to all other human organs, which only begin to function after a sufficient period of development and maturation, the placenta has to control its own growth and develop full functionality at the same time. The specific needs of the child must be met at every stage of pregnancy. In addition to caring for the child, the placenta has hormonal functions. The ability of the placenta to influence the mother's immune system in such a way that it remains functional and protects the mother from infections, but at the same time is prevented from rejecting the placenta itself and the child as foreign tissue, has not yet been researched. 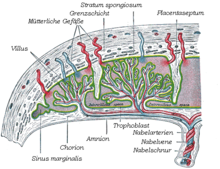 Schematic structure of the placenta

The human placenta is in the mature state, an about 500 to 600 grams and heavy to 20 centimeter in diameter 15 organ after implantation ( nidation ) of the blastocyst forms in the uterus. It arises from the fetal trophoblast and from the maternal uterine lining ( endometrium ). The fetal side of the placenta - i.e. the chorionic plate and umbilical cord - is covered with whitish, cloudy amniotic epithelium (see last picture). The intervillous space filled with maternal blood is located between the chorionic plate and the maternal basal plate ( decidua ) . This is divided into 15 to 20 fields, the so-called cotyledons , by connective tissue placenta septa from the basal plate . Primary villi, which carry the secondary villi, grow from the chorion into these blood-filled cotyledons. When capillaries sprout , the secondary vat becomes a tertiary vat and is therefore ready for the exchange of substances. (In the figure, the entire villus tree is designated as villus .) There is no blood exchange between the capillaries of the tertiary villi and the intervillous space due to the placental barrier (see below). The exchange of substances takes place via diffusion , facilitated diffusion, pinocytosis or is mediated via receptors. From the fourth week of pregnancy, when the child's heart begins to beat, the fruit is supplied via the placenta.

The placenta only serves as an organ for a limited time. It is characterized by the lowest content of tight connective tissue of all organs. In addition, there are no nerves pervading the placenta.

Fetus of cat with maternal part of placenta ( 6 )

One of the functions of the placenta is the placental barrier with the trophoblast-derived syncytiotrophoblast , a polynuclear layer without cell boundaries ( syncytium ). This is a passive filter membrane that separates maternal and child blood and enables or prevents the passage of various substances dissolved in the blood. The mechanisms used for this are diffusion and facilitated diffusion, active transport, diapedesis and pinocytosis . Oxygen, water, some vitamins, alcohol, poisons, drugs, and medications enter the fetus through diffusion. Glucose , amino acids and electrolytes reach the child via facilitated diffusion and active transport processes. Proteins, antibodies of the IgG type and fats are transported via pinocytosis . Viruses and bacteria can gain access to the child via diapedesis. The transmission of maternal IgG antibodies is particularly important, as the child cannot produce enough of its own antibodies until a few months after birth ( nest protection ).

Microtrauma in the placenta can cause the child's blood to pass into the maternal circulation. This is usually not dangerous unless the child is rhesus positive but the mother is negative. In such a case, the mother may become sensitized to child antigens. The mother forms antibodies of the placenta-passing IgG type against the rhesus-positive blood, which enter the fetal circulation in a subsequent pregnancy and there trigger the clinical picture of haemolyticus neonatorum .

Placenta as an endocrine organ

In addition, the placenta forms the human placental actogen (HPL). HPL can be detected in the mother's serum from the 8th week of pregnancy and then increases continuously by up to 2 g daily until birth. The job of HPL is to develop the breasts and prepare them for lactation. It also regulates the metabolism and has anabolic effects.

Childlike side of a placenta with an umbilical cord

The placenta can be very different from person to person. The shape and size of the organ vary, as does the insertion (insertion point) of the umbilical cord.

As a consequence of a placentation disorder, forms such as the placenta accreta , the placenta increta and the placenta percreta arise . The villi grow into the myometrium through partially or completely missing decidua . The consequence is placental detachment disorders after the child is born.

Changes in position, such as the different forms of placenta previa , also occur.

The placenta with the membrane is born as an afterbirth shortly after the child is born.

It is often possible to have the placenta handed over. Commercial providers use it to produce so-called globules (originally homeopathic medicines). Some people bury them in the ground, usually under a tree. This custom was and is widespread in various regions of the world.

In China, the placenta was recommended against infertility and impotence in men in the 16th century. In the second half of the 20th century, placentas were also sold to the cosmetics industry . Creams made from it should be used for skin rejuvenation, there are no scientific studies on this. This practice is obsolete , among other things, because of the fear of HIV / AIDS and other infections.

The ingredients obtained from the placenta are now produced from other sources or synthetically or replaced by alternative substances.

The hormone-rich placenta is sometimes also consumed by the mother to (unproven) promote regeneration and avoid postpartum depression. Critics have the suspicion that the ingestion of placenta, i.e. placentophagy, could even be harmful to the human body. This claim is based on the discovery of bacteria, lead and mercury in this very organ. The literature study by Cynthia W. Coyle et al. (Northwestern University Feinberg) from June 2015 on placentophagy in the years 1950 to 2014 comes to the conclusion that the benefits and risks still have to be researched in order to be able to make well-founded statements. Researchers at the US Centers for Disease Control and Prevention (CDC) report on a child who became infected with streptococci due to maternal placentophagy.

Placenta of a sheep

Most mammalian mothers - including animals that are otherwise purely vegetarian (cows and other ruminants ) - consume their own afterbirth after they have sniffed and cared for (licked dry) their newborns . Not only do they take away the tempting scent trail from the predators , they also supply themselves with vitamins and other important nutrients that they urgently need after birth.

Evolution of the placenta

The placenta is a key mammalian ( evolution of mammal ) innovation from its inception to the present day. It represents a new organ that the egg-laying animals did not have before. In addition to the innovation of breast milk , the mammary gland and maternal attachment, a nutritional connection had to evolve from the egg of the embryo in the womb to the mother in order to allow the embryo to grow in the womb. That growth was a critical selective advantage. The placenta increased the chances of survival of the unborn in the time of the dinosaurs about 160 million years ago.

The gene Paternally expressed gene Peg10 was identified as an important gene for the formation of the placenta . This gene was likely encoded in the DNA of the germ cells of early mammals by a retrovirus , a viral invasion and a process similar to that observed in the recent koala with the pathogenic KoRV gene. A gene knockout of Peg10 in the mouse in the laboratory leads to a halt in the growth of the placenta and to early death of the embryo.

So Peg10 is responsible for forming the placenta. The gene suppresses the mother's immune defense and thus prevents the embryo from being rejected when the physical mother-child connection is established. Only for the further course of evolution is it assumed that the food supply of the embryo by means of the placenta was added to protect the immune system. In the course of evolution, the placenta became larger and the embryo's gestation period was extended. Longer pregnancies helped the mother to be more independent from predators, and animals began to carry live mammals to term.

The env gene of the endogenous retrovirus HERV-W is responsible for the formation of the syncytiotrophoblast . This and other ERVs involved must have acquired the common ancestors of the higher mammals, since they are absent from marsupials and monotremes (egg-laying mammals). In particular, the protein syncytin (syncytin 1 and 2) is of viral origin.