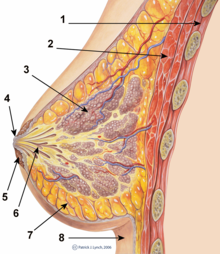 The mammary gland ( Latin Glandula mammaria , from mamma "teat, udder, female mammary gland"; Greek μαστός, mastos ) is the name given to the mammalian glandular bodies that emerge from the milk ridge and that produce and deliver milk during lactation to nourish the suckling offspring.

These are specialized skin glands that can be derived from simple, tubular glands. They are created for both sexes, but are usually only fully developed in the female sex. In humans , they do not develop into the mammary gland of the paired female breast until puberty .

Phylogenesis of the skin and mammary glands

The holocrine sebaceous glands ( Glandula sebacea) as attachments to the hair follicles produce lipids and secrete them. These protect the skin and fur of mammals as sebum or sebum . Both the smaller (eccrine) sweat gland ( Glandula sudorifera merocrina) and the larger merocrine (apocrine) sweat gland or scent gland ( Glandula sudorifera apocrina) are derived from them as further types of gland in the outer skin . The latter form various fatty and protein-containing secretions, which are changed by the skin flora as vertebrate pheromones in the service of intra-species, especially sexual, but also inter-species communication (see also Jacobson's organ ). These scent glands are restricted to certain areas of the body and produce different scents - for example in the armpits, in the anal and genital regions and along the milk bar ; those in the courtyard around the nipple are also called glandulae areolares .

In the evolution of mammals, the mammary glands, which secrete in a similar way, developed from this type with a grape-shaped glandular body . It is assumed that the original task of the milk secretion of the modified type of gland was to keep the clutch of egg-laying basal mammals - similar to monotones - moist and to protect it immunologically . This speaks for:

In marsupials , a fold of skin around the mammary gland forms a pouch to accommodate the young.

Corrosion preparation of the two mammary complexes of a sheep udder

The mammary gland of the higher mammals is made up of externally definable gland complexes. Each of these mammary complexes has a wart known as the teat, and also known as the nipple in humans .

The number of mammary complexes varies depending on the species and is related to the average number of boys. In humans , horses , goats and sheep there is one on each side, in cattle two each, in cats four, in dogs five (sometimes four), in pigs even six to eight mammary complexes.

Each mammary complex can contain one ( ruminant ) or several (most mammals) completely isolated glandular systems. Accordingly, there are one or more teat canals ( ductus papillares ) on a teat . In humans , 15–20 streak canals open onto a papilla, in dogs eight to twelve, in cats five to seven, in horses and pigs two.

The cavity system begins with blind-ended sacs, the alveoli . They are the place of milk production and storage. The milk ducts ( ductus lactiferi ) emanate from the alveoli . These pour into an extension, the cistern ( sinus lactifer ), which leads to the outside in the teat canal ( streak canal).

Light microscopic section of the human proliferating mammary gland; In the picture above, a small milk duct sprouts from the glandular epithelium into the connective tissue

The fine structure of the human mammary gland depends on the menstrual cycle , pregnancy or breastfeeding period. Only during the latter is the gland fully developed. The alveoli have a single layer of epithelium . Depending on the filling state, it is cylindrical, flattened when the alveoli are filled. During milk production, the cell caps are pinched off and released into the lumen (apocrine secretion ).

Basket cells lie between the epithelial cells and their basement membrane . They have the ability to contract (so-called myoepithelia ), which is triggered by the hormone oxytocin .

Small milk ducts also have a single-layer epithelium that also produces milk . The larger milk ducts have one or two layers of epithelium. In their wall they have smooth muscles that are used to transport milk. The epithelium of the cistern is two-layered and cubic, and smooth muscle fibers lie in the wall.

The teat canal has a cutaneous mucous membrane that is severely cornified. The smooth muscles form a sphincter muscle ( M. sphincter papillae ), which, together with blood vessel plexuses and mucous membrane folds, closes the teat and prevents the milk from simply dripping off.

Tumors of the mammary gland are among the most frequently observed neoplasms in women, but also in small animal medicine. Female dogs in particular are affected by this phenomenon. In contrast to humans, the tumors that are formed are generally not very aggressive, although they are often mixed forms of benign ( benign ) and histologically malignant ( malignant ) tumors. The formation of mammary gland tumors appears to be hormone-dependent in the bitch. Dogs neutered before the first heat have a significantly reduced risk of developing tumors. However, this early castration is controversial from the point of view of animal welfare . In cats , the aggressiveness of primary mammary tumors is much higher and can be compared to human breast cancer . In addition, tumors of the milk ridge also occur in other small mammals such as rats or hamsters .

Inflammation of the mammary gland is known as mastitis .

Inflammatory changes in the udder in milk-producing animals are of great economic importance . The local udder preparations that are mostly used to combat them contain antibiotics as a rule. Consumer protection therefore requires a more or less long waiting time until the milk from the diseased organ can be put back into circulation. This loss of earnings can threaten the very existence of farms.

As Incontinentia lactis ( "Milchträufeln") a fault in the milk holding capacity is designated by insufficient closure of the teat canal. It often arises after teat injuries with damage to the teat canal.