The nipple (also Mamille , Latin Mamilla , i.e. diminutive of Latin mamma " female breast "; the Latin anatomical name is papilla mammae ) is the mouth of the mammary glands in primates . The nipple (derived from the word " wart ") corresponds to the teat of all other mammals . 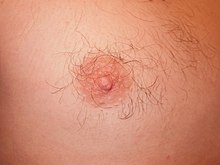 The mammary glands (mammae) are the 15 to 20 mammary glands that are created in every human breast. They form the prerequisite for the production of milk and end with their milk ducts in the nipple. The glands are embedded in adipose tissue and, triggered by increased hormone levels during pregnancy, produce prolactin in breast milk . They form during puberty ( thelarche ) through hormonal influence from the sebum gland tissue and recede somewhat after the menopause . Female and male nipples can be different sizes, shapes, and colors.

Nipples develop at an early stage in embryonic development. In men, however, apart from their function (which is the same for both sexes) as an individually and sometimes very erogenous zone , they have no other function. However, it is reported time and again that in individual cases men are also said to have been able to breastfeed. In 1799, for example, Alexander von Humboldt reported about a Venezuelan farmer who had breastfed his child for months after the death of his wife . This ability can now be triggered artificially by adding hormones. Charles Darwin speculated in his work The Origin of Species that in early mammals both parents could breastfeed. However, this could neither be proven nor refuted.

The nipple is surrounded by a pigmented areola (areola) in which numerous sebum and scent glands end. It reacts very strongly to irritation from touch or cold and is therefore also considered an erogenous zone . The strong irritability makes it easier for the infant to find it when breastfeeding , as it straightens up in response. This erection ( erection ) of the nipple is not caused by erectile tissue , but by contraction of the smooth muscles controlled by the autonomic nervous system. It is more like erecting hair follicles than it is to genital erection; it is caused by the same reflex of the hair follicle muscle that causes goose bumps . A nipple erection can be a reaction to a cold stimulus or touch in both men and women. But it can also occur through sexual arousal (in both sexes) and when breastfeeding an infant. In both cases, the erection is caused by the release of oxytocin .

In some people, the nipple does not stick out, but is turned inside. This can apply to one or both nipples. Permanently or temporarily inward-pointing nipples are also called sagging or inverted nipples. Inverted warts can cause problems when breastfeeding, but are otherwise only an anatomical feature.

As a malformation (here an atavism ), additional excess nipples can appear along the phylogenetic milk ridge from the armpits to the groin region . This is known as polythelia . The absence of one or more nipples, on the other hand, is known as athelia.

With a nipple piercing, the nipple is usually pierced horizontally; Vertically or diagonally attached nipple piercings are also possible, although much less common. Since the nipples act as an aesthetic and sexually attractive feature of both sexes, they are a popular organ for piercings. It is a piercing with a long tradition, especially in recent years it has become a fashion trend among teenagers and young adults.

In nude photography , one can often observe that the models in the photos have erect nipples. In advertising photography , ice cubes, cold air blowers or cold spray are often used to “help”, since an erection also occurs when a cold stimulus occurs. However, icing can lead to nerve and tissue damage.