Pig is a redirect to this article. For the album of the band "Die Prinzen" see pigs (album) . Further meanings are listed under Pig (disambiguation) . 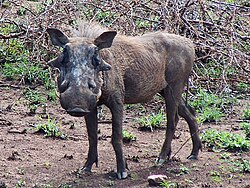 The warthog is one of five African pig species

The genuine or Old World pigs (Suidae) are a mammalian family of the order Artiodactyla (Artiodactyla). The newworldly umbilical pigs or peccaries do not belong to this family, but form their own. The pig family comprises almost 20 species in five genera, including the wild boar , the only representative living in Europe , which is the parent form of the domestic pig .

Real pigs are medium-sized mammals, which are characterized by a compact, barrel-shaped body. The skin is coarse and sparsely provided with short, bristle-like hair. The fur color varies from reddish brown to gray to black. The head body lengths range from 50 to 190 centimeters, plus a 3 to 45 centimeter long tail. The weight varies from 6 to 12 kilograms for the dwarf wild boar and up to 350 kilograms for the heaviest species.

Characteristic of the head are the conical, elongated skull, the tusks and the trunk. This ends in a bare proboscis disk that lies around the circular nostrils. The trunk is supported by a bone or cartilage (trunk bone, os rostrale ) that rests on the intermaxillary bone. The eyes are arranged high on the head and are small, the ears narrow and pointed and sometimes provided with tufts of hair. Within the dentition, the protruding canines , called tusks, are the most noticeable feature, but they are more pronounced in the males than in the females.

Both the canines of the upper and lower jaw are rootless and therefore permanently growing. They protrude upwards and outwards in a circle, they are kept sharp by constant rubbing against each other. These canines are most impressive in the deer boars - in which the upper tusks even grow through the trunk - and in the warthog , in which they can be 60 centimeters long. The upper incisors are small and partially reduced, the lower ones are elongated and almost horizontal. The tooth formula of real pigs is I 1–3 / 3 C 1/1 P 2–4 / 2–4 M 3/3, so they have a total of 34 to 44 teeth. The head is adapted to digging in the ground, some species also have warty humps on their faces.

Real pigs have four toes on each foot . The first toe is always missing, the third and fourth are enlarged with hooves and carry the whole weight. The second and fifth toes, called dewclaws, are higher up on the foot and usually don't touch the ground. The forearm and lower leg bones are always separate.

The natural range of real pigs includes Eurasia and Africa . The greatest biodiversity is found in Southeast Asia , where the Philippines and Indonesia have a number of species that have not yet been finally clarified. Real pigs prefer forests and tree-lined areas such as savannahs, but they usually avoid regions that are too dry.

The domestic pig was introduced worldwide as a pet, and feral populations can now also be found in North and South America , Australia and numerous islands.

Real pigs are primarily nocturnal, especially where they are disturbed by humans. Dense vegetation, self-dug caves in the ground often clad with plants, natural caves or the abandoned burrows of other animals serve as sleeping places. They are mostly found near bodies of water, and many species take mud baths to cleanse the skin and remove parasites. Pigs can run fast and swim well, but when threatened they can be aggressive fighters who attack their predators with their tusks.

Real pigs usually live together in groups, often such groups are formed from one or more females and their offspring, while the adult males live solitary. The territorial behavior is not very pronounced in many species.

Real pigs are usually omnivorous . They consume plant-based food such as roots, tubers, fruits and leaves as well as animal food such as insects, worms, small vertebrates and carrion. Many species dig in the ground with their snouts or tusks in search of food.

In many species there are fights between the males over the mating privilege, these are led by powerful head butts or by fights with the tusks. The gestation period is usually three to five months, the litter size between one and eight, depending on the species. In most species (except for deer boars and domestic pigs ) the young wear a characteristic striped dress that serves as camouflage. Pigs flee the nest and are usually weaned after a few weeks.

Many species of pigs are hunted mainly because of their meat, and the wild boar was domesticated for this purpose very early on . This process may have happened 8,500 years ago, making them one of the earliest known farm animals . Some other types of pigs such as Sulawesi pustular pig , bush pig or deer boar are also kept for this purpose, but mostly in semi-wild form.

Some species have become rare due to hunting and habitat loss. The most threatened species include the dwarf wild boar and the Visayas pustular pig , both of which are listed by the IUCN as " critically endangered " ; some pustular pig species are only known from skull finds so that nothing can be said about their endangerment.

If the age of layers of finds in paleontological excavation sites is to be determined , this age determination can often only be carried out on the basis of comparisons with other sites whose age is already known (relative dating). The comparisons are usually based on key fossils , of which fossil pig teeth in particular play an important role in Africa and Asia for sites from the Pliocene and the early Pleistocene . Above all, the 3rd molars of the bush pigs and the giant forest pigs have changed from wide-low to high-crowned-narrow in the past four million years, which is why their shape is a reliable indicator of their age. 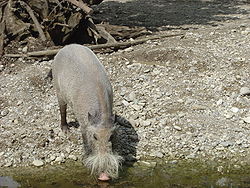 In the classical system, the real pigs together with the umbilical pigs or peccaries and the hippos form the subordination of the pig-like or non-ruminant (Suina) within the artifacts . In the phylogenetic system, the whales , which developed from hippopotamus-like ancestors, must also be included in this group. This is expressed in the following cladogram :

Deer boar with the typical tusks growing through the trunk

The pigs are divided into six genera with almost 20 species :