The toes (in the singular the toe or the toe ; Latin Sing. Digitus pedis , literally 'pointer / finger of the foot', Pl. Digiti pedis ) are the end sections of the foot of the terrestrial vertebrates (Tetrapoda) and belong to the acras .

In terrestrial vertebrates that move on four limbs ( quadrupeds ), the fingers and toes usually have a very similar function and, if at all, are distinguished primarily on the basis of their position on the fore and rear limbs . In terrestrial vertebrates, which predominantly or always move on their hind limbs, that is, on legs in the narrower sense with feet in the narrower sense ( bipedes ), the function of fingers and toes is often significantly different. This is often associated with differences in shape, size and / or number.

There are no special terms for Digiti pedis II , III and IV , neither in technical nor in everyday language. Finding words for the second and fourth toes was part of the 3sat competition "We are missing the words" in 2009. The obvious suggestion to designate them analogously to the fingers as index toe or ring toe , whereby at least the index toe already for 2003 is occupied. However, these terms are not established in the language community and therefore cannot be found in any dictionary. 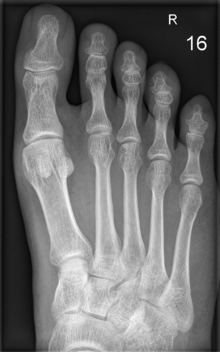 From toes spoken of particularly in the end portions of the feet people . Due to the bipedic nature of humans and the resulting functional differences between human hands and feet, human toes are relatively much shorter and sometimes also differently oriented than the fingers. Humans have five toes on each foot. The anatomically first toe ( hallux , digitus pedis I ) is the largest - although not always the longest - toe in humans (hence also called the big toe , big toe or big toe ) and is located at the front end of the foot in the innermost position. The anatomically fifth toe ( digitus pedis V ) is the smallest toe (accordingly also called the little toe , small toe or small toe ) and is the furthest outside. In the other terrestrial vertebrates, the number of toes varies between 1 (e.g. horses ) and five, with most species four toes are formed.

The balls of the toes lie at the base of the toes, i.e. at the metatarsophalangeal joint . In humans, each toe has a nail . In animals, toes can also have hooves , claws or claws instead of nails . There are also animals whose toes are webbed together. Even in humans there are still such interdigital membranes in the embryonic stage , but they largely degenerate due to apoptosis . If this does not take place, cutaneous syndactyly occurs .

The limbs of the toes

The toe bones ( Ossa digiti or Ossa digitorum pedis ) are similar in structure to the finger bones . The big toe has two links, all other toes are tripartite. The limbs are divided into the basic limb ( phalanx proximalis ), middle limb ( phalanx media ) and terminal limb ( phalanx distalis or phalanx unguicularis ). In ungulates , they are called the fetlock , crown and coffin bone . The base, body and head can be distinguished on the toe bones.

Movements of the toes and muscles

Spreading the toes is called abduction . If you pull your toes together again after splaying them, this is an adduction .

There are, among others, the following diseases and malformations of the toes:

With reference to fingers and / or toes:

The term dysmelia (malformation) is applied to all kinds of limbs: arms and legs, hands and feet, fingers and toes.

The toe wrestling world championship has been held annually in Derbyshire , UK , since the 1970s .