This article covers the claws of animals. For further meanings see claw (disambiguation) .

The giant claws of Therizinosaurus

The claw ( Latin unguis , more rarely: unguicula ) is a solid, mostly curved structure on the end members of the extremities of many animals, which they use as a weapon and to grip. The claw belongs to the skin appendages . Homologous organs in humans and great apes , the nails , as well as ungulates the hooves and claws .

In many vertebrates ( reptiles , birds , mammals and some amphibians ) the claw is a skin formation on the toes and fingers (front toes) grown from horn . The characteristic basic component of vertebrate claws is the structural protein keratin , formed by keratinocytes . The bony basis of the claw is the distal phalanx or toe ( phalanx distalis ), also known as the claw bone ( os unguiculare ).

The claws on the tarsi of the arthropods are formations of the exoskeleton . Its main component is sclerotin with a smaller proportion of chitin . They are organs analogous to the claws of vertebrates.

The only since the 16th century witnessed word claw belongs in terms of "the curved" like squiggles to the Indo-European. Root * ger "turn [to] [to] overcome, [to] bend".

Claws on a young koala

Claw of a domestic cat

All predators and many other carnivorous mammals have claws, although the length and shape can vary significantly depending on the species. Most representatives of the cats (Felidae) as well as some representatives of the crawling cats (Viverridae) can retract their claws into the paw to protect against wear and tear and extend them again if necessary.

Most dogs (Canidae) have four or five toes on their hind feet, depending on the species. With five toes on the hind foot, the first toe can be more or less present as a rudiment , as a so-called wolf's claw . It has no contact with the ground, so it is useless when moving, but it can, for example, help pack prey. Because it doesn't wear out while walking, one wolf's claw can grow longer than the other claws.

The distal phalanx of the fingers and toes of primates is usually not provided with a claw, but with a nail . In contrast to claws, nails are not pointed, but have a rounded edge; In contrast to the hoofs of the odd-toed ungulate and the claws of the cloven-hoofed animals , nails do not carry the body weight when moving. However, there are exceptions among primates: marmosets have claw-shaped nails, except on the big toe. There is also a cleaning claw on the second toe of the wet-nosed primates . In Koboldmakis the second and the third toe are equipped with a grooming claw.

At the border to normal skin there is a deeply drawn-in fold ( vallum ) on the back of the claw , the nail fold ( vallum unguis ). In this depression, the dermis has fine villi, the epidermis of which forms the main part of the horn wall (so-called crown horn).

In the wall area of ​​the dermis there are very fine leaves that anchor the clawed shoe. A soft horn is formed on the small, rounded sole.

Protection of the claw and abrasion

Most cats (not cheetahs) have claws hidden in a skin pocket when not in use. An elastic band ( ligament dorsal longum ) pulls the claw back passively. An auxiliary ligament ( ligamentum dorsale breve ) ensures that the claw is guided laterally past the middle phalanx ( claw mechanism ). The claws can be extended by pulling the deep flexor tendon .

This mechanism protects the cat's claws while walking and stays sharp. In addition, cats constantly sharpen their claws by removing the lateral, superficial layers of the horn wall.

In contrast, the claws of most other claw-bearing mammals are rubbed off while walking. In many pets , the abrasion of the claws is less than their growth in length. The claws then have to be trimmed regularly.

The Latin name for the claw is usually the same as for the nail : unguis (plural Ungues ). Some authors prefer an independent, unambiguous name and designate the claw in Latin as unguicula (plural unguiculae ), in contrast to unguis for the nail.

Linné summarized in the 12th edition of Systema Naturae (1766) claw and nail-bearing mammals to a group called Unguiculata . The taxon was long controversial and is now considered obsolete. 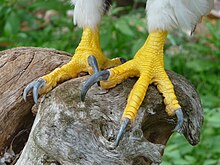 Claws of the giant sea eagle

Most birds only have claws on their toes (see also bird's foot ). As a young bird, the hoatzin has claws on its wings, rudimentary claws are also found on the wings of kiwis , some emus and cassowaries .

Pet birds often have to have their claws trimmed regularly because there is not enough wear and tear in the cage.

Most reptiles have well-developed claws. For example, lizards use their claws to climb, and carnivorous species of lizards also use them to hold on to prey.

With the evolution of the snakes , the legs have been regressed. In many boas and pythons , however, rudiments of the hind legs are present on both sides of the anus as dewclaws ( dewspurs ).

An unusually bright smooth clawed frog . The three claws on the rear foot are clearly visible on the left.

Most amphibians do not have claws. Exceptions to the frogs are the clawed frogs and the dwarf clawed frogs . The representatives of both genera have black claws on the first three toes of the hind legs. In dwarf-clawed frogs, these are very small horn caps that can be quickly abraded when moving on gravel .

Even with the tailed amphibians , there are exceptions: clawed salamander japonicus and clawed salamander fischeri have claws on the front and rear legs. These two species belong to the genus Onychodactylus in the family of angular newts . Another newt with claws is Pseudobranchus striatus , which belongs to the arm newt family . It has no hind limbs but has claws on all four fingers of the fore limbs.

Claws on the hind leg of the green-blue beetle

Most of the arthropods that bear claws have a pair of claws on the terminal limb (pretarsus) of the foot ( tarsus ). Only one claw is less often developed. The term claw is also used - mostly for a single claw, but sometimes also for a pair of claws. The terms claw and Latin unguis (plural Ungues ) are clear in this regard and therefore preferable in case of doubt.

In weaving spiders , the expression of the tarsus as Trionycha ( three- clawed or three-clawed spiders ) or Dionycha ( two-clawed or two-clawed spiders ) is of decisive importance and indicates different ways of life. Most net-building species belong to the three-claws. Two-clawed species, on the other hand, have setae instead of the central claw and are mostly active hunting species such as jumping spiders . The division of the spiders into three-claws and two-claws does not correspond to the taxonomy .