The epidermis ( Greek epi "on", "above"; derma "skin") is the epidermis of vertebrates . As the outermost layer of the skin, it forms the actual protective cover against the environment .

Histological picture of the layers of the epidermis 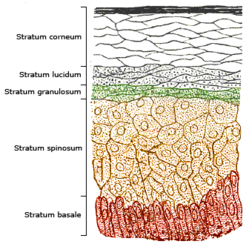 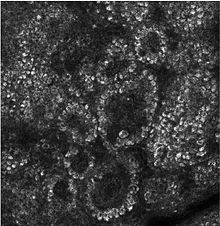 The stratum basale - the "basal cell layer" - serves as a single, innermost cell layer for the regeneration of the skin; Here is the cell division instead. One daughter cell begins its migration to the surface, the other remains and divides again. The supply of nutrients is still comparatively good here, although the epidermis itself does not contain any blood vessels. As with all epithelia, it is demarcated from the dermis below by a basement membrane , which runs largely flat in the field skin , but is strongly deformed in the inguinal skin by papillary bodies (bulges in the dermis), the density of which determines the structure of the dermal ridges .

Within the basal cell layer, there are special sensory cells for touch stimuli, the Merkel cells . Melanocytes , the pigment-forming cells, are also located here . 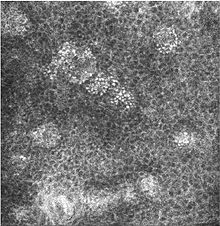 In the stratum spinosum , also known as the “prickly cell layer”, the cells are connected to desmosomes by cytoplasmic extensions . This is where the step-by-step cornification process known as keratinization begins . Since the cells shrink during histological processing, they have a prickly appearance in the specimen. The stratum spinosum also contains defense cells of the lymphatic system , which are known as Langerhans cells . 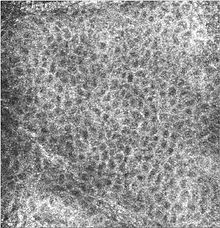 Confocal image of the granule cell layer in a horizontal section

As the cornification progresses, the cells begin to break down in this “granular cell layer”, and they gradually transform into lifeless corneocytes. The outer shape gradually flattens out and the inside of the cell is more and more dominated by keratin granules . The cell nucleus is not as clearly delineated as in the stratum spinosum .

The stratum lucidum , also known as the “glossy layer ”, is a layer of cells that looks very uniform under the microscope and is only found on the groin skin of the hands and feet. Its task is to represent a barrier against all forms of intruders into the skin. For the most part, it consists of an oily layer with minor differences in refraction (therefore it appears transparent). Here, keratohyalin granules liquefy to a semi-liquid, fat and protein-rich, acidophilic substance, elidin . In the skin of the field, the stratum lucidum is barely developed and can therefore only be recognized as a thin, differently colored cell strip under the almost unstructured stratum corneum . Here it forms the transition layer to the highly inhomogeneous granule cell layer. 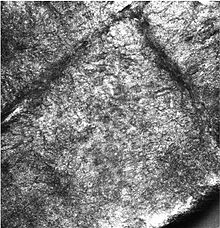 Confocal images of the stratum corneum in horizontal section