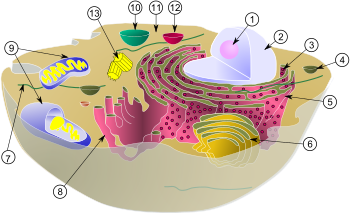 Scheme drawing of an animal cell. The cytoplasm (11) is not called an organelle.

An organelle ( diminutive of organ , ie "little organs") is a structurally definable area of ​​a cell with a special function. The definition is inconsistent: some authors only refer to structures with a membrane as organelles, for example cell nucleus , mitochondria , plastids (with chloroplasts ), the Golgi apparatus and the endoplasmic reticulum . Others broaden the term to include other structures such as centrioles . With single cells“Organelle” is used in this sense as a term for complex structures such as scourge and eye-spot .

Single-celled organisms without a nucleus ( prokaryotes ) generally have no membranes inside the cell and therefore no organelles according to the first definition. However, there are prokaryotic structures that can be understood as organelles in a broader sense, for example flagella.

Möbius' original definition of "organula" (1882) only included organ-like structures of unicellular organisms. Here is a diagram of the paramecium , with food vacuoles, cilia and other organelles.

Wilson (1900) still referred to structures in cells of multicellulars as "organs" or "cell organs". Here a cell from his textbook, with two centrosomes in the center of the star-like arranged microtubules during a nuclear division . In the middle the chromosomes .

According to a definition that is partially used today, only membrane-bound structures are called organelles.

In biology, an organ is a defined functional unit within a living being. The analogy to the microscopic structures within a cell is apparently so obvious to authors of relevant textbooks that it is not explained in more detail. The first to use a diminutive of the word 'organ' for corresponding cellular structures was probably the German zoologist Karl August Möbius (1884):

"While the reproductive cells of the multicellular animals live inactive until they detach, migrate and develop, the single-celled animals enter into communication with the outside world through the body mass involved in reproduction, and many also form special organules for this."

Organulum (plural: organula) is the diminutive of the Latin organum. In a footnote that appeared as a correction in the following issue of the journal, Möbius stated:

“The organs of the heteroplastids [= multicellular] consist of unified cells. Since the organs of the monoplastids [= protozoa] are only differently formed parts of a cell, I suggest calling them 'organula' ”. [the bracketed explanations do not appear in the original text].

The most original definition of the term was therefore limited exclusively to cell components of single cells. Some of the works published a little later name Möbius as the author.

It took several years until the term organulum or the newer organelle became generally accepted and also included components of cells of the multicellular cells in an expanded sense. Books and textbooks around 1900, by Valentin Häcker , Edmund Wilson and Oscar Hertwig , still talked about the organs of the cell. Later, both names were probably used side by side for a while: Bengt Lidforss wrote in 1915: “A new formation of these organs or organelles does not take place, at least in higher plants”.

Around 1920 the term organelle was used for the drive structures ("motor organelle complex", flagella and their anchoring) and other structures of single cells. Alfred Kühn wrote in 1920 about the centrioles as dividing organelles , for which, however, applies to the Vahlkampfien that "the alternative: organelle or product of structure formation" has not yet been decided - but without going into the difference between the two alternatives.

Max Hartmann used the term in 1953 in a textbook for extracellular (pellicula, shells, cell walls) and intracellular skeletons of unicellular organisms.

It was only later that the now widely used definition emerged, according to which cell components only surrounded by a membrane are regarded as organelles. Sometimes this is further restricted and only mitochondria and plastids , which have their own genome, are called organelles. But the more original definition of subcellular functional units in general is still in use.

The origin of the term organell in the German-speaking area seems to have been forgotten. In 1978 Albert Frey-Wyssling wrote of the "English term 'the organelle'", which would often be incorrectly translated as 'the organelle' instead of 'the organelle'. Frey-Wyssling suggested that all energy-consuming structural elements of the cell and only these should be referred to as organelles, e.g. also centrosomes , ribosomes and nucleoli . However, this energy-dependent definition has not caught on.

In contrast to the term organelle , which always refers to a single object (such as a mitochondrion), the term compartment is used for the sum of all similar cellular spaces. A cell can therefore have many mitochondria, but only one mitochondrial compartment. The cytoplasm is also a compartment, but not an organelle.

Mitochondria , the cell nucleus and plastids ( chloroplasts and their relatives) are surrounded by a double membrane . Other membrane-bounded organelles have a simple membrane. These include the components of the endomembrane system and, in plants, the cell sap vacuole . In addition, there are some special membrane-bounded organelles that only occur in certain cell types or certain eukaryotic species groups, mostly single cells.

Scheme of a mitochondrion 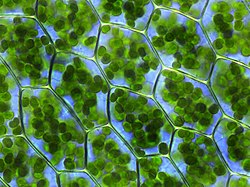 Chloroplasts in the leaf blade of the deciduous moss Plagiomnium affine

The mitochondria occurring in almost all eukaryotes and the plastids specific for algae and higher plants have their own genome (mitogenome or plastome) and their own machinery for protein biosynthesis (mitoribosomes or plastoribosomes). They are therefore referred to as 'semiautonomous organelles'.

According to the endosymbiotic theory , from a phylogenetic point of view, they are descendants of bacteria that were ingested by early eukaryotic cells. These bacteria were integrated into the cell in the course of evolution. Due to the presence of the mitochondrial precursors (derived from α-proteobacteria ) it was possible for the early eukaryotic, previously anaerobic , cells to use the much more effective oxygen-dependent energy production for the first time. The uptake of cyanobacteria , which developed into plastids, made it possible to use sunlight to generate energy: eukaryotic algae were created and thus the precursors of all plants.

Semiautonomous organelles have a double membrane: the outer one is formed by the host cell and is therefore of eukaryotic origin. It is derived from the in the recording constricted the organelle predecessor plasma membrane . The inner membrane is of prokaryotic origin. This is the modified plasma membrane of the symbiont . It provides a diffusion barrier for the exchange of molecules and electrons are.

Unnecessary structures of the bacterial cells were lost, most of the genes were transferred to the nucleus of the host cell or were also lost. However, some genes have also been added to the genome of the organelles, e.g. B. Genes for the exchange of proteins and amino acids with the host cell. What remains are the remnants of the prokaryotic genome, which is made up of a circular DNA molecule, and structures that are important for the function of the organelles.

Semi-autonomous organelles multiply independently by dividing. When the host cell divides, they are divided among the daughter cells.

In addition to the semi-autonomous organelles, only the cell nucleus has a double membrane, the nuclear envelope . The organelles described in this section are usually found in all cells of an organism. In plants, this includes the cell sap vacuole and in all eukaryotes various components of the endomembrane system : the endoplasmic reticulum (ER), the Golgi apparatus , lysosomes and peroxisomes . A brief description of these organelles can be found in the article Cell at this point. Transport vesicles , which ensure the exchange of substances between the other components, also belong to the endomembrane system. Their inclusion in the definition of an organelle is inconsistent: Sometimes individual vesicles are referred to as organelles, sometimes not. 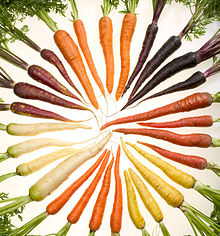 Carrots get their color from chromoplasts

Endosomes are missing in plant cells . For this they have plastids and a cell sap vacuole. A plant cell has at least one of the plastid types chloroplast , chromoplast and leukoplast . During differentiation , one type of plastid can transform into another. Plastids also contain their own ribosomes (plastoribosomes) with their own DNA.

Organelles are listed here that occur in eukaryotic protozoa or, in certain multicellular species, in all cells. Complex plastids such as apicoplasts can have their own organelles ( nucleomorph , a reduced cell nucleus) and different types of ribosomes. The plastids of red algae are also known as rhodoplasts , those of gaucophytes as cyanelles. More complex organelles sin the eyespots mostly photosynthetic , flagellate protists and especially the Ocelloide unicellular dinoflagellates family Warnowiaceae (Warnowiiden) that the phototaxis serve.

Eukaryotic organelles without a membrane

Cilia on the surface of lung epithelial cells

A more recent definition assumes that there is a surrounding membrane. However, the older meaning of the term, which is also still used, does not recognize such a requirement. According to this meaning, all cellular structures that are considered to be organ-like are referred to as organelle. It is difficult to differentiate between organelles defined in this way and larger molecular complexes. For example, when ribosomes are called organelles, then why not spliceosomes or the large enzyme complex of DNA replication and transcription ? Accordingly, the assignment of smaller structures to the organelles is not uniform. Assigning ribosomes or nucleoli to organelles would show that organelles, namely mitochondria and plastids or the cell nucleus, can themselves have organelles.

The broader organelle term also allows the inclusion of extracellular structures such as the plant cell walls or the shells of single cells.

One of the best-known representatives of the membrane-less organelles is the centrosome. Centrosomes can be recognized by light microscopy and were therefore discovered as early as the 19th century. They are not created anew, but arise through duplication and division. After cell division , each cell has a centrosome, which doubles during the cell cycle . In 2006 a work was published which suggests that centrosomes have their own genome. This does not consist of DNA , but of RNA and codes, among other things, for a reverse transcriptase . If these findings on the mussel Spisula solidissima are confirmed, centrosomes may also have to be referred to as semiautonomous organelles.

Given the great variety of intra- and extracellular structures that could be considered organelles, there are no general structural or functional similarities among these structures. The following, incomplete table gives some examples.

As a rule, prokaryotes have no internal membranes and therefore no organelles according to the narrower definition. Exceptions are magnetosomes from magnetotactic bacteria and thylakoids from cyanobacteria . According to the further definition of the term organelle, however, numerous structures can be designated in this way, some of which the following table lists. Mesosomes , invaginations of the plasma membrane of bacteria, were for a time thought to be organelles. However, it turned out to be artifacts .