The Oxford English Dictionary ( OED ) is the most comprehensive dictionary of the English language . Its aim is to present the entire English vocabulary since the 9th century, including all known meanings, variants and uses. The 2nd edition in 20 volumes, published in 1989, contains around 600,000 keywords with around 2.5 million references.

The OED is published by Oxford University Press . The project began in 1857, in 1884 a first delivery appeared under the direction of James Murray , and in 1928 the first edition in 12 volumes was completed. Several generations of linguists were involved in the processing, among them JRR Tolkien and William C. Minor . An online edition with the material of the planned 3rd edition is updated quarterly.

In England, the first Dictionarius containing a collection of Latin words was published in 1225. From 1538 a number of Latin-English dictionaries appeared in London, some of which were arranged alphabetically, others arranged the vocabulary according to word fields. The first all-English dictionary, A Table Alphabeticall , was published in 1604 and contained 2500 entries. His editor Robert Cawdrey (* around 1538; † after 1604) was primarily concerned with explaining difficult words ("hard usual English words") . A total of seven major dictionaries came onto the market during the 17th century. They usually only contained a synonym for the term to be explained and were consistently limited to difficult, uncommon words. 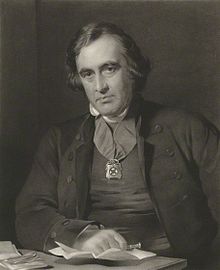 Richard Chenevix Trench, initiator of the OED, drawing from 1863

On November 5, 1857, Richard Chenevix Trench (1807-1886), Dean of Westminster Abbey , called on the Philological Society to create a dictionary of the English language. His talk was titled "Some Deficiencies in Our English Dictionaries". Trench envisioned an inventory of the entire English language; This dictionary is expressly not intended to serve language maintenance: lexicographers are historians, not critics.

Trench knew that a single person could no longer handle such a project. He therefore proposed a joint venture based on the work of volunteers. The proposal - at that time still under the name New English Dictionary on Historical Principles - was accepted by the Philological Society in 1858 and Herbert Coleridge (1830–1861) was appointed editor. Coleridge died after only two years, he had just been able to look through the receipts for half of the letter A during this time, and his successor Frederick James Furnivall (1825-1910) also proved to be overwhelmed, as he finally realized himself. Twenty years after the start, the project was on the verge of failure. 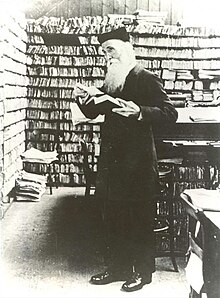 Editor James Murray in his "Scriptorium" in Oxford, photo before 1910

The decisive turning point came in 1877 when, on the one hand, James Murray was hired at Furnivall's suggestion and, on the other hand, Oxford University Press was won as a publisher. Murray published an appeal in 1879 that numerous booksellers attached to their books. Remarkably, he addressed himself not only to his compatriots, but also to Americans and the inhabitants of the British colonies: in fact, the entire English language, which had since become a world language, was to be documented.

The method of collecting evidence had already been worked out by Samuel Johnson. The word, where it was found, and a quote were written on a strip of paper to illustrate the use of the word. Johnson had tried in this way to convey the meaning of a word. Trench went far beyond that: he wanted to use evidence to illustrate the entire history of a word, as it were to write a biography from the first appearance in the English language to its disappearance, whereby every change in meaning should be underpinned by a quotation.

In order to finance the project, the dictionary was published in numerous deliveries. The first fascicle appeared on February 1, 1884 with the keywords a - ant . The project was secured when Queen Victoria gave her permission to dedicate the volume with the letter C. In addition to Murray, Henry Bradley was second editor from 1888 , followed by William A. Craigie as third editor. After seventy years, the twelve volumes of the New English Dictionary were finally completed in 1928. By then, 414,825 words had been defined and 1,827,306 references had been given for them. At work a single keyword - bondmaid (German: serf) - was lost. However, the English language developed faster than the dictionary, so that a first supplementary volume was necessary in 1933 (editor William Craigie, Charles Talbut Onions ). Only since then has the dictionary been known as the Oxford English Dictionary . The second supplement in four volumes was published between 1972 and 1984 (editor Robert Burchfield ). After a total of five supplementary volumes, the second, completely revised edition was published in 20 volumes in 1989.

Another new edition was 28 percent complete in August 2010. This resulted in a paid online edition that is updated quarterly, initially under the direction of John Simpson . A third printed edition was expected again in 2013, but not before 2028.

Structure of an article

The Oxford English Dictionary was created with the help of thousands of volunteers who submitted a total of six million copies. The documents were first sorted alphabetically, then within the same keyword according to parts of speech: for example bell as a noun, adjective and verb. Then the documents were sorted according to the time from which they originated and finally according to different meanings.

A key word initially contains pronunciation and etymology - Oxford University Press originally opposed it because it wanted to publish its own etymological dictionary. Then follows the definition and finally the references. Basically, the quotations should illustrate the use of the keyword. The first quotation should, if possible, also prove the first appearance of the word in the English language. After that, one quote per century is sufficient; if the meaning changes significantly, it can be more.

The Oxford English Dictionary is the most important dictionary of the English language. "The OED says ..." has become a constant phrase in all cases of doubt. The Oxford English Dictionary has been criticized for its alleged sexism , racism and imperialism, but the vehemence of criticism is just one more testament to its pre-eminence. It has become a popular sport among lexicographers to refute the initial record of a keyword in the OED.

Comparable dictionaries in other languages ​​are mostly used by academies: The Accademia della Crusca in Florence created the first dictionary of the Italian language as early as 1612 . In France, the Académie Française brought out the Dictionnaire de l'Académie from 1694 , whereby it also sees its task in setting standards. In Spain the Royal Spanish Academy fulfills a similar function. Your Diccionario de Autoridades - also a reference dictionary - appeared between 1726 and 1739; the resulting Diccionario de la lengua española , however, does not contain any evidence. The German dictionary was started by the Brothers Grimm in the 1830s and only completed in 1960; the revision of the letters A – F is currently in progress. Of the other multi-volume national dictionaries, mostly started in the 19th century, those of Denmark ( Ordbog over det danske Sprog ) and the Netherlands ( Woordenboek der Nederlandsche Taal ) are complete, while those of Sweden ( Svenska Akademiens ordbok ) and German-speaking Switzerland ( Schweizerisches Idiotikon ) are not yet completed. Lastly, Webster's Dictionary (actually: An American Dictionary of the English Language ), the authoritative version of which first appeared in 1828, is significant for the US-American language area .

In addition to the 20-volume standard edition, there is also a one-volume small print edition with 2402 pages, as well as abridged versions. The most extensive of the shortened editions is the two-volume dictionary The Shorter Oxford English Dictionary (6th edition 2007), with which all literature, including modern scientific literature, can be opened up. There is a copy-protected CD-ROM edition of this edition from Oxford University Press, as well as a downloadable application from WordWeb. This also includes the one-volume The Pocket Oxford Dictionary , which roughly corresponds to the Duden . The (monolingual) Oxford Advanced Learner's Dictionary is widely used for English teaching in German upper secondary schools .

The CD-ROM of the Oxford English Dictionary in version 4.0 contains the text of the 20-volume 2nd edition, the 3 supplementary volumes and around 7000 entries from 1997 onwards.