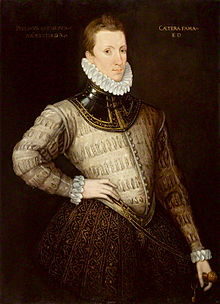 Sir Philip Sidney (* 30th November 1554 in Penshurst , Kent , † October 17 . Jul / 27. October  1586 greg. In Arnhem ) was an English courtier, soldier and writer and was considered an ideal image of the Elizabethan nobleman who is both excelled as a poet and courtier as well as a fighter for the Protestant cause in Europe. He was one of the first great authors of English prose .

Sidney was the son of Sir Henry Sidney, who was appointed governor of Ireland by Queen Elizabeth I Tudor , brother of Robert Sidney and nephew of Robert Dudley, 1st Earl of Leicester , the favorite of Elizabeth I, whose heir he was considered. His sister was Mary Sidney , Countess of Pembroke. He studied at Oxford and Cambridge and at Gray's Inn in London and then traveled the European continent for three years, where he made contacts with major Protestant circles and a. witnessed the Bartholomew Night in Paris , during which thousands of Huguenots were murdered and the English Protestants holed up under his leadership in the English embassy. Returning in 1575, he first won the favor of Queen Elizabeth I of England, but without being able to benefit significantly in terms of his career at court. Sidney married the daughter of Sir Francis Walsingham , the secretary of state and influential chief of secret services to Elizabeth I, but retired in 1578 to Wilton House in Wiltshire , the country estate of his brother-in-law Henry Herbert, 2nd Earl of Pembroke , where he served a number of Sonnets in the sought- after style of the age , which followed the Concetti of the Italians, and wrote the shepherd novel Arcadia .

But although Sidney has decidedly Spanish and Italian patterns in mind, he is not content with descriptions of the shepherd's life; he also interweaves scenes of knight and hunting life with them and knows how to execute them with equal liveliness and grace. His Apology for poetrie (1595) tries to show that the pleasures of poetry are powerful promoters not only in the acquisition of knowledge, but also in the cultivation of virtue.

Sidney was seen as the ideal of courtier, soldier, and scholar , while also proving to be a generous, insightful promoter of art and science. In 1582 he returned to the court and was appointed governor of Vlissingen . 1583 he was beaten to Knight Bachelor ("Sir"). Fighting against the Spaniards under his uncle, the Earl of Leicester, he was fatally wounded in the battle of Zutphen in September 1586. As he was dying, he sent a letter to Johann Weyer, a personal physician from Jülisch-Kleve in Wesel , asking for help. Sidney died on May 17/27. October 1586 and was buried in the old St Paul's Cathedral in London. The title of Earl of Leicester and heir to his uncle went to his younger brother Robert Sidney after the death of Robert Sidney in 1588.

According to his biographer Alan Stewart, his life was far less eventful than what is recorded in historical memory. He suffered above all from the intrigues at court and the distrust of him and his connections to suspected noble families by Elizabeth I. Since his reputation on the continent was greater than in England, he looked for contacts there in order to marry advantageously, what was canceled due to his untimely death. His father-in-law Walsingham had to answer for his debts.