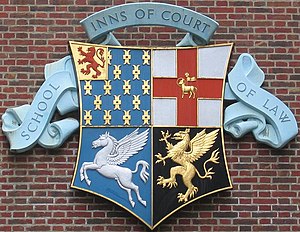 Common coat of arms of the four bar associations. Gray's Inns is shown below right ( heraldically below left).

Gray's Inn , or the Honorable Society of Gray's Inn , is one of the four English bar associations ( Inns of Court ) for barristers in England . In addition, the term Gray's Inn also refers to the building complex in which this chamber has been located since the 14th century. In 1882 the main building of the Royal Courts of Justice was built near it .

Inn (or hospitium ) in this context means a town house or a pension, especially in the original period a pension for students who studied law here. No students have been trained here since the middle of the 19th century. The Arms of Gray's Inn is a gripping ( griffin ), who gave the place its name.

The main buildings of Gray's Inn date back to the early 13th century for the Gray family, who were early civil servants and trained young men in legal matters after the edict of Edward I , separating ecclesiastical and secular law. The term 'Greysin' can be found in the family chronicle as early as 1395. However, when the Honorable Society of Gray's Inn was established is unknown. In 1505 the family sold the buildings and the Society then rented them from the monks of Sheen, the new owners. The Society's early writings were burned, but it is known from other testimonies that many well-known Elizabethans belonged to this Society, such as Sir Francis Walsingham , the founder of the English secret service under Queen Elizabeth I, or Sir Philip Sidney , one of the first English prose writers. Queen Elizabeth I, who promoted the society, was referred to in scriptures as Good Queen Bess . As in the other Inns of Court , many festivals and theater were held here among the students, a hustle and bustle in which the Queen gladly took part. Here, among other things, William Shakespeare's Die Komödie der Irrungen ( The Comedy of Errors ) premiered in 1594.

In the 16th century the famous philosopher, legal scholar and scientist Sir Francis Bacon lived in Gray's Inn, he taught and founded the method of empiricism and with it the modern sciences with his experiments .

Other famous members of the Society included Thomas Cromwell, 1st Earl of Essex , Sir Francis Walsingham , Sir Philip Sidney , Sir Winston Churchill , Franklin D. Roosevelt , Edward Heath and Charles, Prince of Wales . Nowadays, members who are trained here have to attend around twelve dinners, at which the tradition applies that no one is allowed to go out during the meal until the first cigarette after the meal is lit, which, incidentally, must be solemnly requested. This shows whether you can get through a long court session without a break.

The dining room of Gray's Inn, with its famous Gothic wooden beamed ceiling, was destroyed in the Second World War, but has been reconstructed and is a well-known landmark.

Gray's Inn, also known as the Northern Inn , is the northernmost of the four bar associations.

Gray's Inn and Lincoln's Inn are in the London Borough of Camden (formerly the Borough of Holborn ), on the border of the City of London . They do not have their own legal status. The nearest underground station is Chancery Lane .