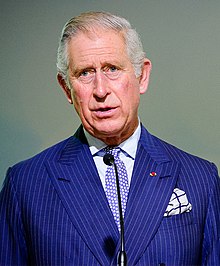 Standard of
the Prince of Wales

HRH Charles Philip Arthur George, Prince of Wales , Duke of Cornwall , Duke of Rothesay and Duke of Edinburgh (born November 14, 1948 in Buckingham Palace , London , short: Prince Charles , German: Prince Charles ) is the heir to the throne of the United Kingdom . He is the eldest son of Queen Elizabeth II and Prince Philip . Charles belongs to the House of Windsor , which belongs to the House of Saxe-Coburg and Gothagoing back. On his father's side, he has ancestors in the Schleswig-Holstein-Sonderburg-Glücksburg house and in the Battenberg house .

Charles was born as the first child of Prince Philip and Princess Elisabeth around a year after their wedding. He was the first grandchild of his maternal grandparents, the then royal couple, George VI. and Elisabeth , as well as the first great-grandchild of Queen Mary . At the time of his birth, Charles was second in line to the British throne behind his mother . Due to a special decision by his grandfather, the then King George VI., All children of the then heir to the throne Elizabeth were given the rank of royal prince or princess and the associated salutation "His / Her Royal Highness", which otherwise could only be passed on in the male line . 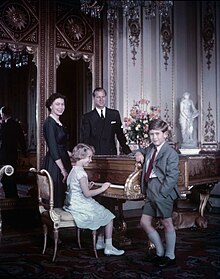 Prince Charles with his parents and sister Anne (1957)

With his mother's accession to the throne in 1952, Charles became heir to the throne at the age of three and received the title Duke of Cornwall . The following year he attended her coronation . As a child, Charles was brought up in preparation for his future regent office. From 1954 to 1967 he enjoyed training at traditional private schools in Great Britain, including at the Cheam School (Preparatory School) and in the Gordonstoun ( Public School ) boarding school , which his father had already attended, as well as a stay as an exchange student in Geelong, Australia . He also received private lessons at Buckingham Palace. In 1967, Charles took a degree in archeology and anthropology at Trinity College of the University of Cambridge , where he then however story changed. In 1970 he made his bachelor's degree. He then attended the University of Wales, Aberystwyth , to acquire knowledge of the Welsh language . He was the first Prince of Wales to speak Welsh. In 1975 he also received a Master of Arts from Cambridge University.

Following his studies, the prince completed military training from 1971 to 1976; he served in particular in the Royal Navy and learned to fly helicopters as well as propeller and jet planes. Due to subsequent promotions (most recently on June 16, 2012), he now holds the following five-star military ranks: Admiral of the Fleet of the Royal Navy, Field Marshal of the British Army and Marshal ( General ) of the Royal Air Force .

In early 1970, Charles attended the sessions of the House of Lords as the Queen's Deputy. Towards the end of 1977, the prince was in the Privy Council ( Privy Council ) was added. When he took over these functions, he began to appear as the official representative of the British Crown at public events and state visits. 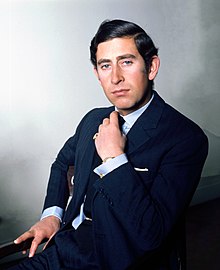 On July 29, 1981 he married Diana Spencer , daughter of John Spencer, 8th Earl Spencer , in front of a worldwide TV audience in St Paul's Cathedral in London , who thereby became Princess of Wales. In this marriage, Prince William was born on June 21, 1982 and Prince Harry on September 15, 1984 . The family lived in Highgrove , Gloucestershire and at Kensington Palace in London.

Charles re-contacted his long-time lover Camilla Parker Bowles in 1986 , which made the marriage difficult. Diana also began various affairs at this time, e. B. with her riding instructor James Hewitt . From the end of the 1980s, the marriage was considered broken. The marital crisis was resolved in 1992 by the publication of Diana: Her True Story , in which reporter Andrew Morton revealed the love affair between Camilla and Charles and Diana's psychological problems such as bulimia and suicide attempts, to a public scandal. In December 1992, the couple was forced to announce the official separation. In 1993, an intimate phone conversation between Charles and Camilla from 1989 was published. Under pressure from Queen Elizabeth II and a public dispute over the terms of severance pay, Charles and Diana were divorced on August 28, 1996. Diana was able to maintain her status as "Princess of Wales", but had to forego the title of "Royal Highness".

Diana and her boyfriend Dodi Al-Fayed , the son of the Egyptian billionaire Mohamed Al-Fayed , were killed in a traffic accident in a Paris road tunnel on August 31, 1997 .

For more information on the marriage of Charles and Diana see: Diana, Princess of Wales

The Prince of Wales and the Duchess of Cornwall with President George W. Bush and his wife Laura Bush on a visit to the United States in November 2005

Charles initially announced to the public that a marriage to Camilla Parker Bowles was not planned. The Prince and Camilla Parker Bowles continued their relationship, with both appearing together in public from 2000. In July 2002, the liberalization of divorce law by the Anglican Church made a remarriage of the divorced prince, at least in the form of a purely civil marriage, appear possible. In 2003 Camilla moved to Charles at Clarence House .

On February 10, 2005, a spokesman for the heir to the throne confirmed that Charles would be married for the second time. The wedding to Camilla Parker Bowles was initially scheduled for April 8th. However, there were some problems with the preparations for the wedding. For legal reasons, the wedding could not take place in Windsor Castle , as it was originally planned. There were also some legal concerns about the marriage beforehand. Queen Elisabeth initially indicated that she did not want to take part in the wedding ceremony. Her husband also left his appearance open. International guests such as Sweden's Crown Princess Victoria or Denmark's Crown Prince Frederik also canceled, as it was not an official “royal wedding”.

Due to the death of Pope John Paul II , the wedding was postponed for one day. On April 9, 2005, Charles and Camilla Parker Bowles were married at Windsor Parish Church of St John Baptist . Following the civil wedding in the town hall, a church blessing was held in St. George's Chapel in Windsor Castle. Millions of television viewers watched the ceremony. As the wife of the Prince of Wales, Camilla is now the Princess of Wales; however, she does not have this title, but is referred to (outside of Scotland) as the Duchess of Cornwall. Charles let it be known that after his accession to the throne she would not call herself Queen Consort , as usual , but Princess Consort (princess consort) - based on Prince Albert , Queen Victoria's husband ; in the meantime he has questioned this again.

The British people have now accepted the marriage of the Prince of Wales and the Duchess of Cornwall, especially since it became known that Charles' sons, Prince William and Prince Harry, had agreed to his new marriage. 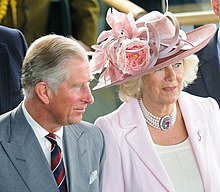 Charles and Camilla at the official opening of the Welsh Parliament , Cardiff , Wales ; May 2011 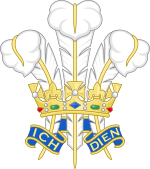 Badge of the Prince of Wales

The heirs to the throne of Great Britain traditionally bear the English titles Duke of Cornwall and Earl of Chester and the Scottish titles Duke of Rothesay , Earl of Carrick , Baron of Renfrew , Lord of the Isles and Prince and Great Steward of Scotland . These came automatically to Charles when his mother became queen on the death of his grandfather on February 6, 1952. The title Prince of Wales will later be awarded separately. The English term “Prince” is ambiguous and in German means either “Prinz” (king's or prince's son) or “Fürst”. In the case of the “Prince of Wales”, “Fürst” is the correct translation since Wales is a historical principality. Charles is the 21st holder of this title, awarded on July 26, 1958. His solemn investiture as Prince of Wales took place on July 1, 1969 at Caernarfon Castle . He is usually addressed as His Royal Highness The Prince of Wales , but in Scotland as His Royal Highness The Prince Charles, Duke of Rothesay . When his father died on April 9, 2021, he inherited the title of Duke of Edinburgh , Earl of Merioneth and Baron Greenwich as his eldest son .

Title and predicate from birth to today

"His Royal Highness The Prince Charles Philip Arthur George, Prince of Wales, Duke of Cornwall, Duke of Rothesay, Duke of Edinburgh, Earl of Chester, Earl of Carrick, Earl of Merioneth, Baron Greenwich, Baron of Renfrew, Lord of the Isles , Prince and Great Steward of Scotland, Knight Companion of the Most Noble Order of the Garter , Knight of the Most Ancient and Most Noble Order of the Thistle , Great Master and First and Principal Knight Grand Cross of the Most Honorable Order of the Bath , Member of the Order of Merit , Knight of the Order of Australia , Companion of the Queen's Service Order , Member of Her Majesty's Most Honorable Privy Council , Aide-de-camp to Her Majesty "

Possible name as a king

At the end of December 2005, some confidants announced that Charles would not be King Charles III in the event of his accession to the throne. (Charles III.), But want to call King George VII. The last bearer of this name, George VI. , was the father of Elizabeth II and thus his grandfather.

The name Karl / Charles does not have a positive connotation in the history of the British kings, Karl I was executed, Karl II was known for the rule of mistresses at his court and had numerous illegitimate children, but no legitimate heir to the throne. There was also the pretender to the throne, Charles Edward Stuart , who, as the grandson of the deposed Jacob II, laid claim to the throne and was named Charles III by his followers, the Jacobites . was designated. In the line of succession there is also King Charles Emanuel IV of Sardinia, who was led by the Jacobites as Charles IV (or Charles IV ).

A renaming is not uncommon at the accession to the throne. King Edward VIII was called David, his brother, King George VI, was called Albert. Since Albert was not a common royal name in Great Britain and Queen Victoria had wished that no British king should bear the name Albert, he decided on the name Georg. Like Charles, this was one of his first names.

In response to these speculations, his office said that no decision had been made on his name as king.

The Prince's official residence since 2002, the death of his grandmother Elizabeth , has been Clarence House in London, which she previously lived in and which he had renovated while largely retaining the furnishings before moving in. Until then, Charles had privately lived in an apartment in the adjoining St James's Palace . His office is in Buckingham Palace . In 1981 he moved into the Highgrove House , which he had acquired, as a country estate , where he also runs an organic farm. In the Scottish Highlands , where he likes to stay, Charles uses the Birkhall estate , which is part of the estate of the royal summer residence Castle Balmoral and was previously also used by his grandmother, as well as the Castle of Mey , which she acquired in 1952 , where Charles starts every year August spends a week.

Orders and decorations of the Commonwealth (selection)

Honors from other countries (selection)

Wikinews: Charles Mountbatten-Windsor  - on the news