The title of this article is ambiguous. For the British nobleman of Württemberg descent, see Francis von Teck .

Duke Franz Paul Karl Ludwig Alexander von Teck (born August 27, 1837 in Osijek , Kingdom of Hungary , † January 21, 1900 in White Lodge , Richmond Park , Surrey , Great Britain ) was a member of the British royal family and the father of Queen Mary . Franz had the title of Count von Hohenstein in the Austrian Empire and later that of Duke von Teck in the Kingdom of Württemberg . In 1887, Queen Victoria gave him the title of Highness . 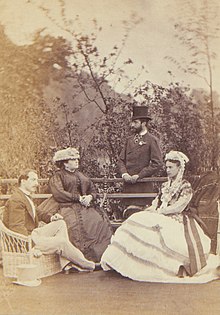 As the son of a morganatic marriage, with no succession rights, Franz had little income compared to other European princes. He had bad marriage prospects. He eventually married Princess Mary Adelaide of Great Britain, Ireland and Hanover, daughter of Prince Adolphus, Duke of Cambridge and granddaughter of King George III. who was called "Fat Mary" because of her obesity. So she had poor marriage prospects, which was compounded by the fact that she was over 30.

The couple married on June 12, 1866 at Kew Palace , London. The Duke and Duchess of Teck had four children (see also Teck / Cambridge family ):

Duke Franz von Teck with his wife Mary Adelaide and their daughter Mary, 1867.

Due to their relatively modest financial resources, the couple were forced to live on Mary Adelaide's pension of £ 5,000 a year, supported by income from their mother, the Duchess of Cambridge . Mary Adelaide's efforts to get more money from her cousin Queen Victoria were unsuccessful. However, the couple got an apartment in Kensington Palace and the country house "White Lodge" in Richmond Park. Despite the modest income, the Duke and Duchess of Teck led an extravagant lifestyle that caused them to run into debt. In 1883 they finally had to flee from their creditors from Great Britain and lived with relatives in Florence and Germany. They finally returned to Britain in 1885.

In 1887 Queen Victoria gave Franz the title of "Highness" as a present for her golden jubilee on the throne. The Tecks' financial situation also improved when their daughter Princess Mary became engaged to the British heir to the throne Prince Albert Victor , the Duke of Clarence, in 1891 . After the prince's death just six weeks after the engagement, Queen Victoria persuaded the brother of the Duke of Clarence, Prince George, Duke of York, to hold Mary's hand.

The Duchess von Teck died in 1897. Duke Franz continued to live at White Lodge, but did not meet any public obligations. He died there on January 21, 1900 and was buried in the royal tomb of St George's Chapel in Windsor . There were rumors that Franz was actually dying in a Viennese brothel and that his body was secretly transferred to Great Britain to spare his daughter, the future queen, any inconvenience.