Mary Adelaide of Cambridge, Princess of Great Britain, Ireland and Hanover (full name Mary Adelaide Wilhelmina Elizabeth ; born November 27, 1833 in Hanover , † October 27, 1897 in the White Lodge , Richmond Park , Surrey ) was a member of the British royal family the house of Hanover . She is known as the mother of Queen Mary , wife of King George V , and was one of the first members of the royal family to become involved in charity.

Princess Mary Adelaide was born in Hanover on November 27, 1833. Her father was Prince Adolph Friedrich of Great Britain , Ireland and Hanover, Duke of Cambridge, the youngest son of King George III. and Queen Charlotte . Her mother Augusta was born Princess of Hessen-Kassel, daughter of Landgrave Friedrich III. from Hessen-Kassel-Rumpenheim .

Mary Adelaide spent the first years of her life in Hanover, where her father was viceroy on behalf of his brothers Georg IV and later Wilhelm IV . Her love of food and her tendency to get fat led her to become seriously obese and to be named "Fat Mary".

After the death of King William IV, Mary Adelaide's uncle, her cousin Princess Victoria , daughter of the Duke of Kent, ascended the British throne in 1837 . Due to Salic law , however, she was denied the Hanover throne, which Duke Ernst August von Cumberland ascended as King Ernst August I of Hanover. The Duke of Cambridge was no longer needed in Hanover and therefore moved with his family to Kensington Palace in London .

In 1856, she turned down a request from the widowed King of Sardinia and was still unmarried at the age of 30. Her appearance and lack of income of her own were additional factors in addition to her age. To prevent her from ending up as an old maid, the Prince of Wales (later Edward VII ) brought up the young Austrian officer Prince Franz von Teck , son of Duke Alexander von Württemberg . Queen Victoria agreed to this, although as a son from a morganatic marriage he did not correspond to the same class, but at least he was of royal blood and had a prince title. The wedding took place on June 12, 1866 at St. Anne's Church in Kew .

Through her marriage, Mary Adelaide became "Royal Highness Princess Mary Adelaide, Princess of Teck". Prince Franz was made Duke of Teck in 1871. He remained "His Highness Duke Franz von Teck" until Queen Victoria awarded him the title "Highness" on the occasion of her golden jubilee in 1887. The Duke and Duchess of Teck had four children:

The Duke and Duchess of Teck chose London as their residence, primarily because only Mary Adelaide had an income with her 5000 pounds of apanage a year. Her mother, the Duchess of Cambridge, provided additional support for Mary Adelaide. Requests for additional support were rejected by Queen Victoria, who only provided the couple with an apartment in Kensington Palace and the White Lodge country house in Richmond Park.

Despite her modest income, Mary Adelaide had exclusive tastes and an extravagant life, with balls, expensive food and clothing, and international travel. Debt quickly built up and the couple were forced to flee from their creditors in 1883. It traveled to Florence and also visited relatives in Germany and Austria. Originally it used the name "Graf und Countess von Hohenstein", the title with which Duke Franz was born. Mary Adelaide soon preferred to use her royal title, which guaranteed her more attention and better service. 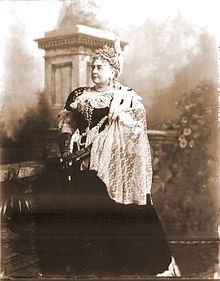 The Tecks returned to England in 1885 and continued to live at White Lodge, Richmond Park. Mary Adelaide began to devote herself to charitable causes.

In 1891 Mary Adelaide wanted her daughter Victoria Mary "May" von Teck to marry one of the sons of the Prince of Wales and later King Edward VII. For her part, Queen Victoria was keen that the bride came from Great Britain but was not a subject. Princess May met the criteria and became engaged to Prince Albert Victor, Duke of Clarence and Avondale . After his sudden death six weeks after the engagement, Queen Victoria persuaded Prince George, Duke of York, the future King George V to hold Mary's hand.

The marriage of Mary to a future king brought about a decisive improvement in the financial situation of the Tecks. In the summer of 1893, the Duchess von Teck and her youngest son Prince Alexander went to Bad Neuenahr for a spa stay . Mary Adelaide never lived to see her daughter's coronation. She died at White Lodge on October 27, 1897 and was buried in the royal crypt in St George's Chapel at Windsor Castle .