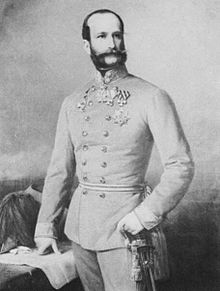 Prince Alexander of Hesse and the Rhine around 1860 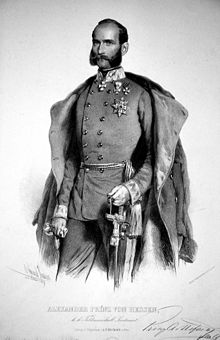 kk Field Marshal Lieutenant Alexander Prince of Hesse after the Battle of Solferino with the Order of St. George 3rd and 4th Class , the Knight's Cross of the Military Maria Theresa Order and the Grand Cross of the Order of Leopold . Lithograph by Eduard Kaiser, 1859 .

Alexander Ludwig Georg Friedrich Emil of Hesse and the Rhine (* July 15, 1823 in Darmstadt ; † December 15, 1888 there ) was a prince of Hesse and the Rhine and the founder of the House of Battenberg , a branch of the Hessian ruling house. He was a Russian, an Austrian and a Hessian general, and in 1866 he was the commanding general of the 8th German Federal Army Corps in the war against Prussia, which was not loyal to the German Confederation at the time .

Alexander was officially the third son of Grand Duke Ludwig II of Hesse and the Rhine (1777–1848) from his marriage to Princess Wilhelmine of Baden (1788–1836), daughter of Hereditary Prince Karl Ludwig of Baden . In research, however, there is disagreement about the question of whether Grand Duke Ludwig II of Hesse was actually Alexander's biological father or whether he came from an extramarital relationship between his mother and the Grand Ducal Stable Master and riding instructor of Prince Baron August Ludwig von Senarclens-Grancy and Ludwig recognized and put into the line of succession only as his own son to avoid a public scandal. Baron Senarclens-Grancy is also often ascribed the paternity of Alexander's two sisters, Elisabeth Karoline (1821–1826) and Marie (1824–1880), who later became Tsarina.

While his brother Ludwig III. after his father's death ascended to the throne in Darmstadt, Alexander switched to a military career. Already at the age of ten in the Hessian military service, he followed his sister Marie, the wife of the future Tsar Alexander II , to Saint Petersburg in 1840 , where he enjoyed a steep career in the military service of the Tsar. In 1843 he became Russian major general and commander of the Guard Hussar Regiment. He fought in 1845 as a general of the cavalry under Prince Voronzow in the Caucasus. Since Tsar Alexander II would never have agreed to a marriage of his brother-in-law with a lady-in-waiting of his sister, Countess Julia Hauke , Alexander left his regiment without permission, fled with Julia to Breslau and married her there on October 28, 1851. For this he was demoted and had to Quit Russian service.

In 1852 Alexander von Hessen-Darmstadt entered Austrian military service and was awarded the status of major general on August 13, 1853. He took part in the Sardinian War in 1859 as part of the V Corps under FML Graf Stadion . With his brigade he distinguished himself in the battle of Montebello and was promoted to field marshal lieutenant on May 27 . During the Battle of Solferino , his troops distinguished themselves in the center of the battle front at Cavriana , where he managed to keep the front stable and enable the Austrian troops to withdraw in an orderly manner. In the war of 1866 commanded Prince Alexander the 8th German Federal Army Corps against the Prussian Main Army , whose operations in the main campaign , he (1867) justified by its "Campaign Journal". Austrian since 1868, he was also appointed General of the Hessian Cavalry in 1873.

In cooperation with the reactionary Hessian Prime Minister von Dalwigk , Alexander tried to find a pro-Austrian orientation in solving the German question .

As prince of the House of Hesse, he was constitutional from 1848 to the March Revolution of 1849 (which he never formally entered) and, after the victory of the reaction from 1856 (formally entered in 1862) until 1888, automatically a member of the 1st Chamber of the Estates of the Grand Duchy of Hesse . From 1886 to 1888 he was president there.

Marriage and adoption of the additional name Battenberg

During his time in Russian service, Alexander fell in love with his sister's lady-in-waiting, Countess Julia Hauke , the orphaned daughter of the former Polish Minister of War , who was admitted to the Polish aristocracy in 1826 and Hans Moritz Hauke , who was raised to the rank of Russian Count in 1829 , who was a ward of the Tsar . Since the connection was not befitting, he had to leave St. Petersburg, but returned to travel secretly to Wroclaw with Julia, who was five months pregnant at the time, where he married her on October 28, 1851.

After both arrival in Hesse, his brother, Grand Duke Ludwig III, elevated Julia to “Countess of Battenberg” on November 5, 1851 and seven years later to “Princess of Battenberg” on December 26, 1858 with the title of Highness . From then on Alexander himself was also called "Prince von Battenberg" and lived with his wife in Heiligenberg Castle . The couple's children were excluded from inheritance in Hesse.

On the occasion of his 50th anniversary in service, the Prussian King Wilhelm I appointed him chief of the Schleswig-Holstein Dragoon Regiment No. 13 on September 8, 1883 .

Prince Alexander dealt intensively with numismatics . He was considered an authority in this field and published three works on his own extensive collections: "Hessen", "Mainz" and three weeks before his death and already seriously ill, he corrected the last printed sheets for the publication " Numismatic-Genealogical Series - Coin Cabinet of Prince Alexander of Hesse. Heiligenberg Castle, September 1889 ”.

There are five medals with his portrait.

After his sudden death, Alexander was first buried in what is now the Old Mausoleum next to his mother and his sister, who died early, on the Rosenhöhe in Darmstadt .

Since his wife Julia would never have been given a seat next to him because of her bourgeois origin, he was transferred to the newly built mausoleum in the Kreuzgarten on the Heiligenberg near Jugenheim in April 1894 . After her death on September 19, 1895, Princess Julia von Battenberg was buried at the side of her husband in this very mausoleum.

In 1902 there was a final reburial; Alexander and Julia found their final resting place in a grave in the open air, directly by the Golden Cross , which reminds of Alexander's mother, the Grand Duchess Wilhelmine .

Battenberg had the following children from his marriage: