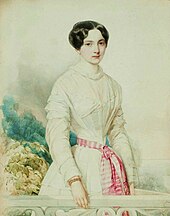 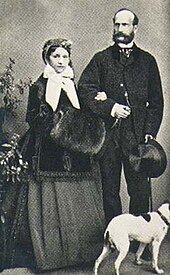 Julia, Princess of Battenberg, with her husband, Prince Alexander of Hesse, 1882

Julia Teresa Salomea Hauke (also known as Julie von Hauke , * November 12, 1825 in Warsaw ; † September 19, 1895 at Heiligenberg Castle near Jugenheim ) was the morganatic wife of Prince Alexander of Hesse , mother of Prince Alexander of Bulgaria and ancestral mother of the second House of Battenberg (later also in the English branch of the family: Mountbatten ).

Julia Teresa Salomea Hauke ​​was born in Warsaw in 1825 as the daughter of Hans Moritz Hauke (1775-1830) , who was ennobled two years later, in 1827, and his wife Sophie, née Lafontaine (* 1790 in Warsaw). Her father came from Seifersdorf bei Radeberg in Saxony, was of German descent and a professional soldier and had served with Napoleon's armies in Austria, Italy, Germany and Spain; the mother's family came from Biberach an der Riss . From 1815 Hauke ​​served in the Army of Congress Poland . Tsar Nicholas I appointed him Deputy Minister of War of Congress Poland and raised him to the rank of nobility in 1827 and count in 1829. During the November uprising of 1830, while rushing to defend the Polish Governor General Grand Duke Constantine , he was met by insurgent cadets who first asked him to lead what he brusquely dismissed as “stupidity and childish stuff” in front of his wife and three of his children killed with 19 shots. His widow died of shock shortly afterwards and the children became the Tsar's ward .

The young Julia Hauke ​​became lady-in-waiting of Tsarina Maria Alexandrovna , who came from the House of Hesse , and wife of Tsar Alexander II. At court in St. Petersburg, she got to know the brother of the Tsarina, Prince Alexander of Hesse and at the Rhine. Since the Tsar could not and would not consent to a marriage between his brother-in-law and a lady-in-waiting, Prince Alexander took his leave, but soon returned unexpectedly to the Petersburg court. Both secretly left the court and traveled to Breslau . There they married on October 28, 1851. At this point, Julia was five months pregnant.

The daughter of a Count neugeadelten she was her husband unable overly no match (her great-grandfather Johann Friedrich Michael Hauck was beadle been to Wetzlar at Imperial Courts); the marriage was therefore morganatic . Julia, now called Countess Julie Hauke ​​in Darmstadt, received in 1851 from her brother-in-law, Grand Duke Ludwig III. of Hesse and the Rhine the then vacant title of Countess von Battenberg with the predicate " Exalted ". In 1858, on the occasion of his silver wedding anniversary, he made her hereditary princess of Battenberg with the title “ Highness ”. Battenberg thus became the name of a younger branch of the House of Hesse that was not entitled to the throne .

Julia von Battenberg converted from the Roman Catholic to the Protestant denomination in May 1875 .

She died in 1895 and was buried in the mausoleum of her husband, who had died in 1888, which was completed the year before. His body was first transferred to the grand-ducal mausoleum on Rosenhöhe in Darmstadt, which was expanded in 1869/70 ; Since Julia couldn't get a place next to her husband because of her origins, this mausoleum was built in the Kreuzgarten on the Heiligenberg near Jugenheim . In 1902 there was another reburial, and Julia and Alexander found their final resting place together in an open-air grave, directly at the Golden Cross . The mausoleum was then rededicated to the memorial chapel of the second house in Battenberg / Mountbatten with memorial plaques inside. According to the memories of Princess Marie, Prince Alexander had planned this before 1866.

Julia and Alexander had five children:

⚭ 1885 Princess Beatrice of Great Britain and Ireland (1857–1944) and received the title of Royal Highness .
His descendants included Princess Victoria Eugénie von Battenberg , later Queen of Spain. His children lived in the UK; the eldest son was made Marquess of Carisbrooke in 1917 , but died without a male heir and the title expired with him.

The frequently used title addition “von” is questionable in the case of Count Hauke , since it never existed in Russia like Poland - as questionable as the change of name from (Polish) Julia to polyglot “Julie”, which only happened after his marriage to Alexander von Hessen became common and has recently led to the fact that the name of Countess Hauke, baptized Julia, is pronounced in a romantic French way Julie - probably because she corresponded with her husband primarily in French, which her parents could hardly have guessed at the baptism.

Julia and Alexander's eldest son, Ludwig Alexander (1854–1921), became a British citizen, called himself Prince Louis of Battenberg and rose in 1912 to become the First Sea Lord . His younger brother Heinrich Moritz (1858-1896) also settled in Great Britain and married Princess Beatrice of Great Britain and Ireland (1857-1944). The members of the House of Battenberg living in Great Britain Anglicised their family name to Mountbatten in 1917 due to the anti-German mood in the First World War and renounced their German titles. Instead, they were given British titles by their cousin, King George V : Louis became Marquess of Milford Haven with the additional titles of Earl of Medina and Viscount Alderney , while Alexander , the son of Henry, became Marquess of Carisbrooke with the additional titles of one Earl of Berkhamsted and Viscount Launceston became. Only the Milford Haven line has existed since 1960. The head of the Battenberg-Mountbatten family is George Mountbatten, 4th Marquess of Milford Haven (* 1961).