Beatrice of Great Britain and Ireland 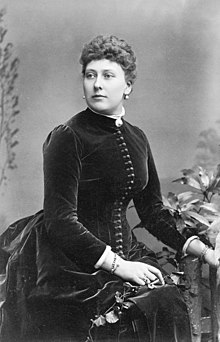 Princess Beatrice Mary Victoria Feodore of Great Britain and Ireland , VA (born April 14, 1857 in Buckingham Palace in London , †  October 26, 1944 in Balcombe , Sussex ) was a British princess . In addition, she is the great-great-grandmother of the Spanish King Felipe VI.

Coat of arms of Princess Beatrice

She was born as the ninth and youngest child of the British Queen Victoria and her husband, Prince Consort Albert of Saxe-Coburg and Gotha .

In 1873, Beatrice Napoléon met Eugène Louis Bonaparte (1856–1879), the Imperial Prince of France and son of the former Emperor Napoleon III. , and his wife Eugénie de Montijo . A connection between the two did not materialize because Queen Victoria wanted to keep her daughter with her for the rest of her life.

In 1874 Beatrice was allowed to attend the audiences of her mother and her prime minister Benjamin Disraeli .

In April 1884, when Beatrice was 27 years old, she went with her mother to Darmstadt in Hesse to attend the wedding of her niece Victoria , the eldest daughter of her sister Grand Duchess Alice . Princess Victoria's groom was Ludwig Alexander von Battenberg , the eldest son of Prince Alexander of Hesse-Darmstadt and his wife Julia Theresa Hauke . Prince Alexander of Hessen-Darmstadt was the uncle of Princess Victoria's father, Ludwig IV of Hessen-Darmstadt .

There she met the bridegroom's younger brother, Heinrich Moritz von Battenberg , and fell in love with him. Beatrice and Heinrich Moritz secretly got engaged in Darmstadt . The queen did not want to agree to a wedding at first because Beatrice was her permanent companion and secretary. After eight months of constant arguing over the marriage, Queen Victoria finally agreed. The queen's only request was that the couple live with her for the rest of their lives. Beatrice agreed, and Heinrich Moritz, who was a half-impoverished and half-class prince, had no future in the Prussian army, so he too agreed. On July 23, 1885, Beatrice married Prince Henry Moritz in Whippingham Church on the Isle of Wight . 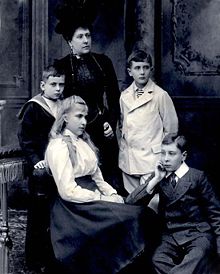 Beatrice with her children, 1900

Like her mother and her sister Alice was also Beatrice a carrier women ( Konduktorin ) the hereditary disease hemophilia ( hemophilia ), which transferred them to their children. The marriage had four children.

In 1890 Beatrice began the English translation of the book " The Adventures of Count Georg Albrecht von Erbach " by Emil Kraus; the book came out a year later. 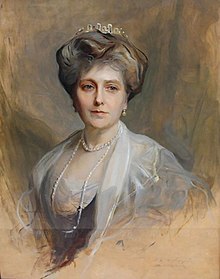 Prince Heinrich Moritz von Battenberg died of malaria during the expedition (1896) led by Sir Francis Scott to Ashanti in Ghana . After Heinrich's death, Beatrice went on vacation in the south of France to come to terms with his death. It was the first time in her life that she was allowed to be alone, not by her mother's side. After a while she decided to return to her daily routine; for the next five years she was again her mother's secretary and companion. When her mother died in 1901, Osborne House , where Beatrice and her family had spent much of their time, fell to King Edward VII , her brother, who decided to turn it into a museum. Beatrice moved from the large Osborne House to the smaller Osborne Cottage.

When the First World War broke out, Beatrice founded her own hospital, the " Princess Henry of Battenberg Hospital for Officers ". Beatrice suffered from rheumatism for the last two decades of her life. She spent her time overwriting her mother's diaries and burning any passages that might be embarrassing. Beatrice's last work was the translation of the diaries of her great-grandmother, Duchess Auguste von Sachsen-Coburg-Saalfeld (1757–1831) from German into English. In 1914 she brought the diary onto the market under the changed title " In Napoleonic Days ".

For the last few days of her life she retired to Brantridge Park , Sussex , away from public life . Beatrice, Queen Victoria's last surviving child, died in her sleep at 5:10 a.m. on October 26, 1944.