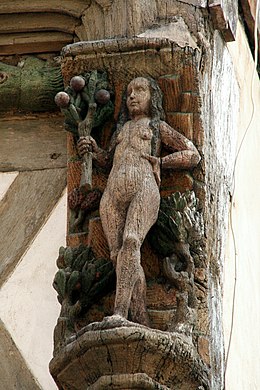 Relief of the ancestral mother Eve at the house of Adam and Eve ( Angers , France, 2008)

The genealogy (family history research) itself as a master mother's earliest documented ancestor (ancestor) from which a familial group of children related by blood derived ; it is at the root of a tree or at the top of a root list . While according to the fathers line parent families their common derivation from a progenitor derive, families and associations refer to mothers lines ( matrilinear via mothers to daughters ) on a common stem nut . Worldwide, female ancestry rules can be found in around 200 of the 1,300 ethnic groups and indigenous peoples recorded worldwide (compare clan mother and Matri- Lineages ).

In mythical and religious stories , the idea of ​​the common ancestor of a social group serves to strengthen their sense of togetherness and to distinguish them from other groups and cultures (compare legends of origin and founding myths ). In the analytical psychology of Carl Gustav Jung, the primal mother or great mother is considered to be a prototype of human imagination ( archetype ) that can be found in the collective unconscious (compare Mother Goddess and Magna Mater ).

In the past mainly the male, agnatic lineages were researched, the newer genealogy is also interested in the biological ancestors of families and noble houses .

Within noble lineages, a woman is usually given the designation of ancestral mother or ancestor (as an honorary title ) only in the event that, as an official wife , she gives the ancestor of a new main or secondary line a lineage holder , through whom the male line is then continued. The mother or grandmother of such an ancestor is not taken into account, the parentage is only determined by the husband. In contrast, Sophie von Brabant (born of Thuringia, 1224–1275) is considered the ancestral mother of the House of Hesse , because she founded the Landgraviate of Hesse by having her three-year-old son Heinrich proclaimed Landgrave in 1247 and the Hessian possessions of the Landgraves of Thuringia for Heinrich im Thuringian-Hessian War of Succession (1247–1264) secured. Often, however, Saint Elisabeth , Sophie's mother and patron saint of Thuringia and Hesse , is also seen as the ancestral mother of the House of Hesse.

Sophie von der Pfalz (1630–1714), an ancestor of the British royal family, is a legally established ancestor : According to the Act of Settlement of 1701, only her biological ( Protestant ) descendants will be considered as heirs to the throne in the future ; since 2013 daughters have been treated equally with sons (see Succession to the throne in the United Kingdom ).

Other famous examples from the European cultural area : 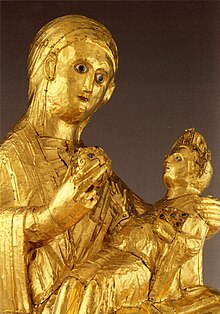 In the biblical book Genesis (1st book of Moses) the woman named Eva ( chawwāh "mother of all living things") is referred to together with Adam as the "ancestral parents" of humanity, consequently she is the ancestral mother par excellence. Similar stories can be found among many peoples, so in the Nordic mythology Embla and Ask are considered to be the first parents of all people, among the Hellenes (Greeks) only Pyrrha and her husband Deucalion survive a flood .

The female figures Sara , Rebekah , Lea and Rachel are considered the " patriarchs " of the Israelites . The Moabite Ruth , ancestress of King David , is named in the Gospel of Matthew as one of the four ancestral mothers of Jesus of Nazareth .

Lanassa - a (great) granddaughter of the Greek legendary hero Heracles - is considered in ancient tradition to be the mythical ancestor of the Molossian royal house of Epirus on the Balkan Peninsula.

Around the world, many find earth goddesses , of which ethnic peoples or religious communities their lineage derived. The divine mother goddess , from whom all human beings are said to descend, forms an early form (see also Magna Mater , Chthonism , Gaia hypothesis ).

Genetic ancestor of all people

The earliest "ancestral mother" of humans was calculated in the archaeological heredity theory ( archaeogenetics ): The so-called " Eve of the mitochondria " lived in Africa an estimated 175,000 years ago (± 50,000) and is biological with all people living today due to the uninterrupted lineage of her Related offspring . This calculation is based on the inheritance of hereditary information from mitochondria (tiny energy power plants in the cells ), which is only passed on from mother to her children , i.e. not passed on from sons. A slight change, a mutation , occurs in the genetic information every 20,000 years .

From the human genetic material that is very similar worldwide in this regard, it can be calculated back when the first distinguishing mutation could have occurred. All mitochondria of contemporary humans descend from this primordial mother , the lineages of all other primeval women would have died out in the meantime.

See also : The seven daughters of Eve  and Adam on the Y chromosome