This article deals with the noble family. For further meanings, see Grimaldi (disambiguation) .

Princely coat of arms of the Grimaldi dynasty of Monaco

The Grimaldi family is a widely ramified noble family that originally came from Genoa and whose most important branch today governs the Principality of Monaco .

In addition to the Doria , Fieschi and Spinola , the Grimaldi were among the four leading families of the Republic of Genoa and provided numerous Doges of Genoa . There were many relationships with the old noble family of Malaspina , who were wealthy on the Ligurian coast and in the hinterland.

Expulsion from Genoa and conquest of Monaco 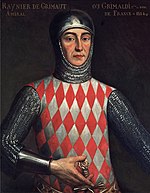 The Grimaldi family was involved in the political-religious wars between the Guelphs and Ghibellines in the High Middle Ages . On the side of the Guelfs, the Grimaldi were driven out of the city in a battle in Genoa and moved westward. In January 1297 they succeeded in conquering the Neapolitan fortress of Monaco by a coup . Francesco Grimaldi , son of Antonio Grimaldi , who is also known as Francesco Malizia (the rascal, rascal), disguised as a Franciscan , asked to enter the fortress on January 8, 1297 , with a short sword under his robe. After he was granted this, he managed to overpower the gatekeepers, open the gate and take over the fortress with his family. As a reminder of this coup , the Monegasque prince's coat of arms still features two Franciscans wielding swords as a shield holder . The first ruler of the Grimaldi in Monaco was Francesco Malizia's older cousin Matteo Grimaldi , son of Lanfranco Grimaldi.

However, Charles II of Naples obtained a news and food boycott against the Grimaldi in the La Turbie Convention on July 29, 1298 . At first this was ineffective, but after some back and forth the Guelphs had to hand over the fortress to the officers of the King of Naples on April 11, 1301 . The Grimaldi were only compensated with 5900 pounds.

In the following years, Raniero Grimaldi went to war as a condottiere for Philip the Handsome . In 1304 Raniero was raised to the rank of admiral of France ( Renerius de Grimaudis, admirandus noster ) for his services as a naval commander in the Anglo-French war . As an admiral he was given the rule (seigneurie) of Cagnes , a castle in Villeneuve de Veuve and the barony (Freiherrschaft) of San Demetrio in Calabria . It was not until September 12, 1331, after the retreat of the Ghibellines, that Raniero's son Carlo received the fortress of Monaco from the French king again. In a document from 1342, Karl is first referred to as Charles, Seigneur of Monaco, Menton and Roquebrune . In 1419 the Grimaldis also officially bought the rule of Monaco from the Crown of Aragon and thus became the undisputed rulers of the "Rock of Monaco".

Subsequently, the family ruled (with the interruption due to Napoleonic rule from 1793 to 1814) over the Principality of Monaco , to which Menton and Roquebrune also belonged from 1355 to 1848 . In 1643 Prince Honoré II received from the French King Louis XIII. For loyal service, the County of Carladès in the southwest of Auvergne was given as a gift, whose name is still mentioned in the full title of the Princes of Monaco, but which has de facto belonged to France again since the French Revolution . In 1731 the main line of the family died out. The side line founded by Kaspar Grimaldi (brother of Lambert Grimaldi, Prince of Monaco, † 1505) still exists today as the ruling Princely House of Monaco, several times inherited through female lines.

Fortress of the Prince's Palace of Monaco

At the beginning of the 20th century, Hereditary Prince Louis II of Monaco had only one illegitimate daughter from a mistress, an Algerian-French variety dancer, which is why the throne threatened to fall to a German relative. He therefore decided, with the approval of his father, to officially legitimize this daughter Charlotte . In 1919 she was raised to Duchesse de Valentinois and in 1920 married Count Pierre de Polignac from the princely house of de Chalençon de Polignac , who also received the title Duke of Valentinois, Prince of Monaco. In order to secure her claim to the throne, Charlotte renounced in 1944 in favor of her son Rainier III. to the succession to the throne, who succeeded his grandfather in 1949. The male line that goes back to the Polignac is still on the throne today.

Currently living members of the Grimaldi are in the line of succession:

The official salutation of the prince is Son Altesse Sérénissime , abbreviated SAS le Prince (German: His Serene Highness (SD) the prince). The personal address is Monseigneur , which, like the Italian monsignor, means "my lord ".

In addition to the one in Monaco, there were other lines in Provence :

There were also numerous lines in Italy :

In Piedmont the Grimaldi di Belforte held the imperial fiefdom Belforte Monferrato from 1539 to 1652 as the successor to the Spinola , which then fell to the Cattaneo della Volta and finally to the Duchy of Savoy. From 1570 until the 19th century they also owned the town and castle Rocca Grimalda .

There were also branches in Carignano , Bologna , Corsica , and Latium .

In Messimeri, Calabria , descendants of Bertone, brother of Ranieri, settled in the 14th century and formed branches in Seminara , Crotone and Catanzaro (from the latter came Bernardino Grimaldi (1839-1897), who 1884-93 several times as an economic and Minister of Finance of Italy). In Sicily, a line rose to princes of Xirumi (near Lentini ), barons of Calamezzana (extinct in the 20th century).

In Spain , Pablo Gerónimo Marchese Grimaldi (1710–1789), State Secretary and Ambassador in Vienna, was in 1772 by King Charles III. raised to Duke of Grimaldi ; the title is now held by the Márquez, Marqueses de Montefuerte, Duques de Grimaldi family through female inheritance.

Coat of arms of the Grimaldi (depicted in 1747), with two sword-armored Franciscans as shield holders