Antibes ? / i (Occitan Antíbol) is a municipality with 72,999 inhabitants (as of January 1, 2017) in southeasternFranceinthe Alpes-Maritimes(06)department of the Provence-Alpes-Côte d'Azur region. Antibes, together with the seaside resort ofJuan-les-Pins, isa popular holiday destination on theCôte d'Azur. For tourist reasons it is also marketed under the nameAntibes Juan-les-Pins. The city is very well connected in terms of transport. It is located at the foot of theAlpson theMediterranean coast, east ofCannesand west ofNice(Nice) and directly on theA8 autoroute(La Provençale), on the railway line fromMarseilletoMonacoand in the immediate vicinityof Nice airport. Within the narrow and winding old town you will find numerous restaurants, bistros and shops of all kinds. The sea and yacht harborPort Vaubanis famous.

Antibes is one of the oldest cities on the Côte d'Azur, it was founded around 340 BC. Founded by the Greeks . It originated from the Greek city ​​of Antipolis (Αντίπολις). Antipolis means "city opposite"; it is unclear against which other city or fortress . In the 4th century before Christ , the Greeks taught here a small trading post one consisting of warehouses, from which one outside the city walls trade with the coastal inhabitants operation. Antibes was later developed into an important city by the Romans and in late antiquity it was also a bishopric . A dedicatory inscription for the god Olloudius found here comes from Roman times .

In 1386 Antibes fell into the possession of the Grimaldi , who sold it to France in the 16th century . The French king had Antibes converted into a fortress after Nice fell to Savoy in the 14th century .

On March 1, 1815, Napoleon, who fled Elba , landed in Antibes. After a march on Paris his " rule of the hundred days " followed.

The seaside resort of Juan-les-Pins was founded in 1882. At the beginning of the 20th century, many writers and artists , including Pablo Picasso , settled in the city.

The city consists of several clearly distinguishable districts, the most important of which are Antibes itself and Juan-les-Pins.

Antibes has revived its ancient name Antipolis for an important industrial area in the hinterland, Sophia Antipolis , which is largely in the territory of the municipality of Valbonne ; here are mainly companies that are active in the research and development of new technologies.

Sophia Antipolis is also the name of the agglomeration ( communauté d'agglomération ) that was formed around Antibes and consists of 17 municipalities. The city is divided into four constituencies: Canton Antibes-1 , Canton Antibes-2 , Canton Antibes-3 and Canton Valbonne .

Staircase alley in the old town

Marché Couvert in the old town 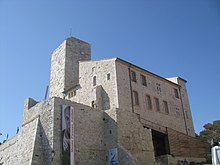 Picasso lived in Château Grimaldi in 1946 .

The sea and yacht harbor Port Vauban was named after the town planner and builder Vauban. With around 1700 berths, it is one of the largest yacht harbors in Europe. The very largest yachts moor at this marina, which is also called the billionaire port. The two most expensive private charter yachts in the world ( Annaliesse and Alysia ) are there for the winter, as are the famous luxury yachts Kingdom 5KR and the Carinthia VII .

Another highlight of Antibes is the Fort Carré at the harbor. The fortress was built on a small hill behind the harbor in 1553 to defend the city and the harbor. It was expanded by Vauban around 1680 and it was rebuilt and expanded again and again over the centuries that followed. Today Fort Carré is a listed building and can be viewed. This is also worthwhile because from the fortress you have a good view of the harbor and the old town behind.

Shore at the Cap d'Antibes

Cap d'Antibes , the peninsula south of the town is a bastion of wealth and exclusivity, which mainly by F. Scott Fitzgerald's novel Tender is the Night ( Tender is the Night ) became known; the Hôtel des Étrangers des Romans is modeled on the Hôtel du Cap-Eden-Roc , one of the most expensive hotels in the world.

Boule players on the seafront

The Envibus buses connect Antibes with the surrounding area. The fares for line 200 of the Rapides Côte d'Azur to Cannes and Nice were set at € 1.50 (as of 2014) in order to relieve the roads.

Antibes is connected to the French rail network via its central station on the Cannes – Nice – Ventimiglia line . TGV, InterCity and regional trains stop at Antibes station. In addition, the Juan-les-Pins district has its own train station on the same route, which only serves regional traffic.

Antibes is twin city of

Commons : Antibes  - collection of images, videos and audio files
Municipalities in the Arrondissement of Grasse