This article covers the peninsula. For other meanings, see Peloponnese (disambiguation) .

The largest city is Patras (214,580 Ew.) In the north; however, the most historically significant are Corinth in the east, Sparta in the south and Olympia in the west.

The name is derived from the mythological figure Pelops , who was a son of the legendary king Tantalus . The second part of the name is the Greek word for "island" (νήσος (pronounced "näsos"), in ancient Greek pronunciation nēsos ). The name literally means "Isle of Pelops".

In Greek, the gender of the name is feminine; no uniform usage has become established in German. According to Brockhaus it is called "the Peloponnese" or technically "the Peloponnese", as in the lexicon of the Middle Ages .

In the Middle Ages , the Italian name Morea (probably "mulberry tree") was common for the Peloponnese , a name that in the 10th century only referred to the western Peloponnese, but was extended to the entire peninsula from the beginning of the 13th century. 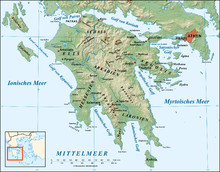 Relief map of the Peloponnese

From the mainland, the Peloponnese can be reached via an isthmus of about 6.3 km wide, the Isthmus of Corinth , which, however, was broken through in 1893 by the Corinth Canal . Nevertheless, the Peloponnese is not considered an island, because the canal is an artificial structure (see also island and peninsula ). Since 2004, the Peloponnese has also been connected to the rest of the mainland in the north between the towns of Rio and Andirrio by the 2.2 km long Rio-Andirrio Bridge .

In terms of landscape, there is a sharp contrast between the rough, uninhabited mountains (altitude up to 2400 m) and the fertile, densely populated valley landscapes or the lowlands by the sea. The latter extends in the west (between Patras and Pyrgos ) and in the south near Sparta .

From a geological point of view, the Peloponnese was originally an island, but in the course of time it was pushed towards the mainland by the northward displacement of the African and Arabian plates (see also plate tectonics ). Clear traces of this can be seen in the many, geologically young, fold mountains . These split up numerous on the Peloponnese and give the landscape a characteristic image. In the Central Peloponnese ( Arcadia ) in particular , the 1500–1900 m high mountainous terrain is difficult to access and is characterized by karst basins ( Poljen ) without drainage above ground , in which - in some cases until today - temporary lakes appear after rainy winters. One example is the large plain of the Stymphalian Lake , known in words and pictures in myths of antiquity , which is only partially silted up, but whose water surface fluctuates with the seasons. Today, the plain is an important resting place for migratory birds and is valued as an ecologically important wetland ( Stymfalia ).

The peaks reach in the north of the Peloponnese up to 2374 m, in the south up to 2407 m ( Taygetos ). The valleys in between are often characterized by, by Greek standards, great fertility. Geographical, climatic and also man-made factors repeatedly lead to devastating landscape fires in the Peloponnese.

As the shifting of the plates continues, the Peloponnese is next to Italy and Crete the most earthquake- prone area in Europe.

Part of the peninsula forms the region (Greek περιφέρεια, periphéría) Peloponnese (Πελοπόννησος, Pelopónnissos) with five prefectures (Greek νομοί, nomí, singular νομός, nomós), of which part of the mainland also extends to the Greek prefecture of Corinthia of the isthmus . The prefectures of Achaia and Elis, together with the prefecture of Etoloakarnania on the northwestern mainland, form the region of Western Greece . Part of the Methana peninsula and a coastal strip of the Argolic Peninsula as well as the islands in the Saronic Gulf and off the Peloponnesian south-east coast belong to the Attica region .

Satellite image of the Peloponnese with the location of ancient cities

The Franchthi Cave in the Argolis is the oldest place in Greece where prehistoric finds (from 15,000 BC) were made. In ancient times there were important centers of the Mycenaean culture on the Peloponnese , which existed from about 1600 to about 1050 BC. Existed. Many Mycenaean settlements were established around or shortly after 1200 BC. Destroyed, partly even abandoned. I.a. Mycenae and Tiryns , however, remained populated. The Dorians probably migrated from the late 11th century BC. In the Peloponnese (see  Doric migration ). In addition to the Dorians , the Achaeans held themselves in the northwest . In the classical period the peninsula was under the rule of Sparta and its Peloponnesian League . After the fall of Sparta at the Battle of Leuktra , the area came in 371 BC. To the domain of the Arcadian League . After the Macedonian rule, parts of the Peloponnese united in the Achaean League , the 146 BC. Was dissolved by the Romans after the destruction of Corinth . At the end of late antiquity , large parts of the peninsula were settled by invading Slavic groups (see the land grabbing of the Slavs in the Balkans ). After belonging to Byzantium for centuries (see theme of Hellas and theme of Peloponnese ), the peninsula, which was now called Morea or Morée, was conquered by the Crusaders in 1204 . The area around Mystras soon became Byzantine again and became a center of the peninsula, which was largely recaptured by the Byzantines. From the 15th century ownership changed between Venice and the Ottoman Empire . From 1686 to 1715 the entire Morea was for the first time completely territorially a Venetian province (see also Turkish Wars ); after the independence of Greece in 1821 it became part of the new state under its ancient name. 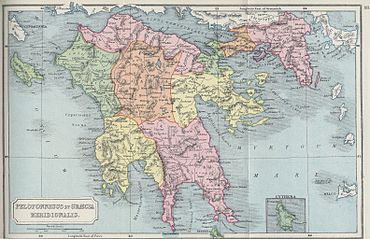 Map of the Peloponnese in ancient times

Landscape of the Peloponnese

Connections to the rest of Greece

The peninsula is connected to the mainland in the east by several bridges over the Corinth Canal and in the north over the Gulf of Corinth with the Rio-Andirrio Bridge, which was inaugurated in 2004 .

A meter- gauge narrow - gauge railway network opens up the peninsula. The main route originally led from Athens via Corinth to Patras and along the west coast to Kalamata, another route opens up the interior between Corinth and Kalamata. A new standard gauge line has been completed to Korinth or Kiato . Since it was completed, the meter-gauge railway east of Corinth has been closed. The route has been operated electrically since February 2011, which further shortened the travel time from Kiato to Athens Airport. Rail traffic on the section between Kiato and Patras was stopped in summer 2009 with the aim of converting to standard gauge. The Diakopto – Kalavryta cog railway, which branches off from this route and is mainly used for tourism , continues to run. The routes from Corinth to Nafplio, Tripoli and Kalamata as well as the routes from Patras via Pyrgos to Kalamata were completely discontinued in January 2011 due to inefficiency, although they had been almost completely renewed and new diesel multiple units purchased between 2004 and 2009.

Two toll highways and expressways, the Olympia Odos , cross the Peloponnese. These meet shortly before the Isthmus of Corinth and lead from there to Athens. The northern part, the A8 from Patras to Corinth, is under construction.

Airports are located at Patras (Araxos) in the northwest and at Kalamata in the southwest of the peninsula.

Ferry connections to Italy go from Patras, to the Ionian Islands Zakynthos and Kefalonia from Kyllini, to Kythera and Crete from Gythio .