This article describes the historic peninsula; for other names, see Morea (disambiguation) .

Morea (Gr. Μωρέας or Μωριάς) has been the Romanesque name of the Peloponnese peninsula (Greece) since the Middle Ages . The name is derived from a Greek word for mulberry tree , which is important for the silk industry .

In 1206 the north-west of the area was conquered by participants in the Fourth Crusade , who founded the Principality of Achaia there. In 1262 large areas had to be ceded to the re-strengthened Byzantine Empire ; In Laconia , the Byzantine despotate Morea was formed around Mystras (Mistra) under the Kantakuzenoi and later the palaeologists . Over time, they were able to bring almost the entire peninsula under their control. Mistra, mostly a secondary school of the imperial family, became a center of late Byzantine culture. In addition, had Venice some possessions on the peninsula. In 1453, the Sultan of the Ottomans , Mehmed II , offered the last Byzantine emperor Constantine XI. to keep control of the Morea if he surrendered Constantinople without a fight, which the latter refused, so that it came to the conquest of Constantinople (1453) , in which the emperor fell. In 1460 the Morea was also taken by the Ottomans under "Fatih" - "the conqueror". 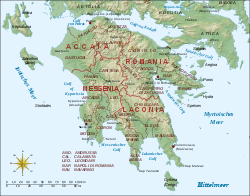 Administrative division of the Venetian Kingdom of Morea , 1687–1715

For the Republic of Venice , the defeat in the war for Crete in the years 1645–1669 gave rise to the reconquest of the Morea. From 1684 conquered Venice by Francesco Morosini , who in 1688 for Doge was elected and was awarded by the Venetian Senate the title of "Peloponnesiacus" with General Otto Wilhelm von Königsmarck with a military offensive by land and sea, which also extends to the entire Aegean extended , the entire peninsula (→ Great Turkish War ). Three Saxon regiments under Colonel Schönfeld also took part in this; they marched to Venice in the spring of 1685 and, reduced by three quarters in 1687, returned to Saxony with "rich booty". The money that Johann Georg III. received from Venice for the soldiers, he used to buy the singer Margherita Salicola out of her contract with Ferdinando Carlo von Gonzaga-Nevers .

For the first time, the Morea became completely Venetian property for a good three decades. Napoli di Romania ( Nauplia ), which later became the first capital of independent Greece , was designated the capital of the new province .

1715 the Morea was under Sultan Ahmed III. taken from the Venetians, who in turn continued to hold their own on the Ionian Islands with Corfu and Santa Maura (Leukas) as well as in southern Albania and Epiros in Butrinto , Parga , Prevesa and Vonitsa until 1797.

After Greece gained independence in 1830 (unilaterally in 1822), the ancient name Peloponnese was preferred again, just as many place names were Hellenized. This is how today's Pylos was called Navarino and the island of Euboea Negroponte until the 19th century .